Firebird and the golden calf 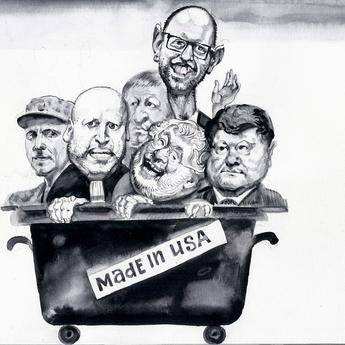 American civilization is based on money - a mysterious substance that has taken hold of the souls of people, the soul of the country, the soul of the American stories. The golden calf, around which America performs its historical ritual, is the most ancient religion, which even in biblical times confronted the Creator. Moses only for a short time left his people to climb the mountain, to hear the voice of God. But this stiff-necked people instantly built themselves a golden idol, bowed to him, and Moses, returning from the mountain with the tablets of God, was forced to destroy a third of this gold-loving people. It is easier for a camel to crawl through the eye of a needle, than for rich America to enter the Kingdom of Heaven.

America is godless against the Kingdom of Heaven, gods against heaven. In the dungeon Fort Knox, filled with gold bars, there is a secret parchment in which is written the commandment of this golden animal, throwing its blinding light on the prostrated dying humanity.

This parchment, stored behind seven seals, sometimes reveals its meaning in the manifest speeches of American presidents. Bush Sr. defined America as a "hail on a hill", the center of a deity, ascended to the top of the world, from where the deity looks to conquered peoples.

Obama called his country the most perfect power of the world, the mistress of the universe, who is charged with the task of controlling imperfect humanity.
When Reagan called the Soviet Union "the empire of evil," he subjected our country to a metaphysical blow, sent against the USSR all the demons living in the "city on the hill." Hit the Soviet Union with a metaphysical blow weaponswhich was clothed in the poisonous technologies of the cold war.

Obama recently called Russia "the main threat to the world," thus repeating Reagan's formula for the "evil empire." It was not a political statement. It was a statement by the master and priest standing at the foot of a mysterious god with the hooves of a Kenyan goat and the golden horns of a calf.

This statement determines the attitude of modern America to Russia. It is precisely this that is being developed in a variety of hostile technologies: starting with the "Magnitsky list", economic and political sanctions, ending with military bases, missile defense systems and orbital groups.

Obama’s metaphysical blow was followed by a Russian response. In his Valdai speech, Putin accused the West of violating the fundamental foundations of mankind, of violating Christian values. In essence, he called the West a machine producing evil. He contrasted the Russian model of the true structure of the universe with the American model of the world. And this confirms that modern history is an arena of grandiose metaphysical contractions.
Russian politicians, generals and conceptualists, defending the Russian state today, must understand this - in modern history there is a battle of metaphysical meanings. The fight of the great religious cosmogony models. The image of "hail on the hill", the idol of the golden calf, Russia opposes its universe, its cosmogonic dream, its divine messianism, for the sake of which the Russian people and the Russian state were created. Messianism aimed at collecting heavenly meanings, bringing these meanings to the ground, creating an ideal being based on divine justice.

This reserved dream is revealed to us in Russian folk tales about the Firebird. In the teachings of the elder Philotheus of Moscow — the Third Rome. In the sublime grandiose dream of Patriarch Nikon, who built the New Jerusalem near Moscow and was awaiting the Second Coming here. And in the "red project", which relies on universal harmony about a justly living humanity.

This Russian dream, stored in notions about Holy Russia, in the poems of Pushkin and the music of Mussorgsky, the works of Dostoevsky and Nesterov, in the grand battle for Stalingrad, in the mystical Victory of 1945, this Russian dream sparkles today among the ruins and smoking cities of New Russia. After the darkness of the ninety-first year, after the "black hole" of history, where Russia was overthrown in the nineties, this dream rises as the dawn rises.

Let high mountain, on which stands the American hail. Let the hail get its flickering night sky with its skyscrapers. Russian dawn is even higher. They have gold. We have a golden dawn.