October 10 2014
52
October 4 protests against the participation of Polish soldiers and mercenaries in the war in Ukraine took place outside the Polish Parliament building in Warsaw. Participants held in their hands the flags of Poland, Russia, Ukraine, Belarus, Donetsk and Lugansk people's republics, as well as banners with the inscriptions: “Stop Bandera”, “No support for Bandera. We remember Volyn ”,“ There is no participation of Polish soldiers in the NATO military operation in Ukraine! ” “The authorities in Poland, thanks to the monopoly on the media, use it to sow anti-Russian propaganda,” said one of the initiators of the demonstration, representing the organization Camp of Greater Poland. “They shamelessly support the Kiev junta, which is fueled by the Bandera traditions.”

The role of Poland in the training of Ukrainian militants is recognized by the Poles themselves. For example, in the spring, the Polish weekly Nie described the training of members of the Right Sector in the fall of 2013 in the Police Training Center next to Warsaw 86, funded by the Polish Ministry of Foreign Affairs. Monthly training course included the study of methods of organizing mass protests, street fighting tactics, shooting techniques, including sniper. “Terrorists trained in Poland killed on the Maidan,” Janusz Korwin-Mikke, a deputy of the European Parliament for Silesia, said openly on Polish television.

16 of June at the site of the crash of the IL-76 militia of the Ukrainian Air Force, shot down by the Ukrainian Air Force, a number of burned documents were found in Polish, belonging to about four dozen mercenaries from Poland and Lithuania, who were rushing to Lugansk. 26 June in the strategic height of Saur-Tomb was killed by a female sniper from Poland, using the latest American rifle caliber 12,5. On the night of July 12, in the area of ​​Ilovaysk, a Ukrainian military outpost was destroyed, and dead among the corpses were found in a uniform with Polish insignia. 2 September and. Minister of State Security of the Donetsk People's Republic, Leonid Baranov, said that the militia captured Polish mercenaries. A few more militants from Poland, according to the same source, surrendered to the militiamen during the battles for the Donetsk airport 3 of October.

According to eyewitnesses, American Poles are showing the greatest fanaticism and cruelty among Polish mercenaries in Ukraine.

“The role of Poland in the events in Ukraine that entailed a coup d'état hardly attracts attention because it tends to act in secret ...” wrote Deana Stryker in June on the OpEdNews website in June. “But as the conflict in the Southeast expands, there is more and more evidence of Polish involvement. Poland not only actively participated in the preparation of activists for euromaidan, but also sent mercenaries to fight against the militia of Donbass. The Internet already has a photo of Jerzy Dzevulsky, who was trained to "fight terrorism" in the United States and Israel, the owner of a private military company, taken along with the acting. President of Ukraine Alexander Turchinov during the battles of the Slavic ".

Dzevulsky’s figure is remarkable in that he is the security adviser to the former Polish president, Aleksander Kwasniewski. And he is on the Board of Directors of Burisma Holdings, the largest private exporter / producer of gas in Ukraine. In April, before the punitive operation against Donbass, along with Kwasniewski, the son of US Vice President Robert Hunter Biden and Devon Archer — a close friend of the family of US Secretary of State John Kerry — joined the Board of Directors of Burisma Holdings. Burisma Holdings plans to organize energy sales to Europe from the Dnieper-Donets Basin, which allegedly has “huge reserves” of shale gas. For example, the Yuzovsky field (the total area exceeds 7885 km) includes the cities of Slavyansk, Kramatorsk, Krasny Luch and Svyatogorsk of the Donetsk region, as well as Balakley and Izyum of the Kharkov region. To extract raw materials should be the company Royal Dutch Shell. 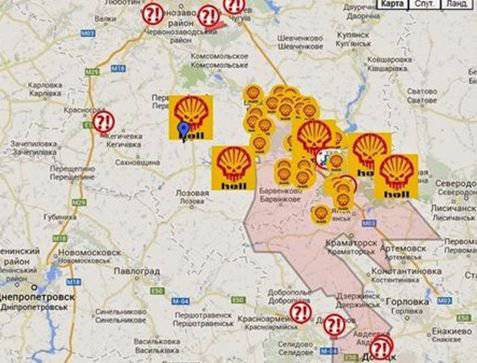 Shell’s contract with the Ukrainian side is drafted in such a way that the Kiev authorities are obliged to take away property from the legal owners if Shell declares that it will drill on the lands belonging to them (Article 37.2 of the Agreement). This is actually what adventurers like Dzevulsky, who headed the “Polish legion of mercenaries to fight against the residents of Donbass”, are doing. In June, Shell confirmed: the company's plans remain unchanged, and field development will resume immediately after the conflict has been de-escalated and the situation has stabilized. In total, it is planned to drill 80-140 thousand holes in the territory cleaned of the population. Environmental problems that inevitably arise at the places of use when extracting the fracking method (water becomes unsuitable for drinking, air quality deteriorates, toxic chemicals are pumped into the ground) are now silent ... The US produces shale gas only in the desert. Some areas of Donbass can turn into something similar in the future if Burisma Holdings implements its plans. Local black soil becoming “unnecessary”, over 26% of world reserves of which is located in Ukraine, is supposed to be sold abroad.

On the left photo: to the right of the former. President Turchinov of Ukraine - commander of Polish mercenaries Jerzy Dziewulski, boasting that he has "a branch of snipers trained in GROM techniques" (Polish special forces specializing in sabotage). The photo shows the president of Poland and a member of the board of directors of Burisma Holdings Alexander Kwasniewski and his security consultant, Jerzy Dzevulsky.

And here is another message about the participation of the Poles, which appeared in the Polish media in August: "The main organizations of the Poles - the Federation of Polish Organizations in Ukraine, as well as the Union of Poles of Ukraine - consciously defend the country's integrity against the activities of the pro-Russian separatists." Polish organizations began to play this role long before the outbreak of hostilities in the Donbas. In Poland, the money collected for the Kiev Maidan, were purchased body armor and ammunition for militants "Right Sector". On the Internet, there are testimonies of participants mentioning boxes with Polish marking, which sealed the chevrons of the “Maidan self-defense” units, which formed the backbone of the National Guard under retaliatory detachments. Again, leaflets, printed materials, newspapers and even some of the “Ukrainian” fat were supplied from Poland, which were supported by maydanschiki.

In the Polish media, you can find enthusiasm about how "Polish weapons make a splash in Kiev." The Kiev regime at the end of the summer turned to Warsaw with an official request for the supply of weapons, but information on such deliveries became public even earlier. So, it became known about the unloading of 16 self-propelled wheeled artillery pieces — 12 mm Czech-made VZ-152 “Dana” cannons, armed with the Polish Armed Forces, as well as staff buses and trucks, unloaded on July 77 in the port of Odessa in an atmosphere of increased secrecy. After unloading, the artillery division, which is supposedly part of the 1st Masurian Artillery Brigade, fully staffed by Polish troops, proceeded on its own to the Razdelnaya railway station for loading onto platforms. On September 13, residents of Western Ukraine managed to record how 34 entered their territory from Poland tank German-made Leopard heading east.

19 September 2014 was signed in Warsaw on the creation of a separate Lithuanian-Polish-Ukrainian brigade (LitPolUkrbrig) of a three-regimental staff with a headquarters in Lublin, Poland. The leading role in the formation of the brigade is assigned to the Poles. In the Polish media, LitPolUkrbrig is already called a “mini-NATO against Russia” (Mini NATO przeciwko Rosji). The brigade should become the cover that “legalizes” Polish mercenaries fighting against the armed forces of Donetsk and Lugansk people's republics. And at the same time 400 will prepare later the return of the inhabitants of Little Russia under the Polish-Lithuanian administration.