Meet Zumwalt! The invisible destroyer of the US Navy will be released into the sea next spring 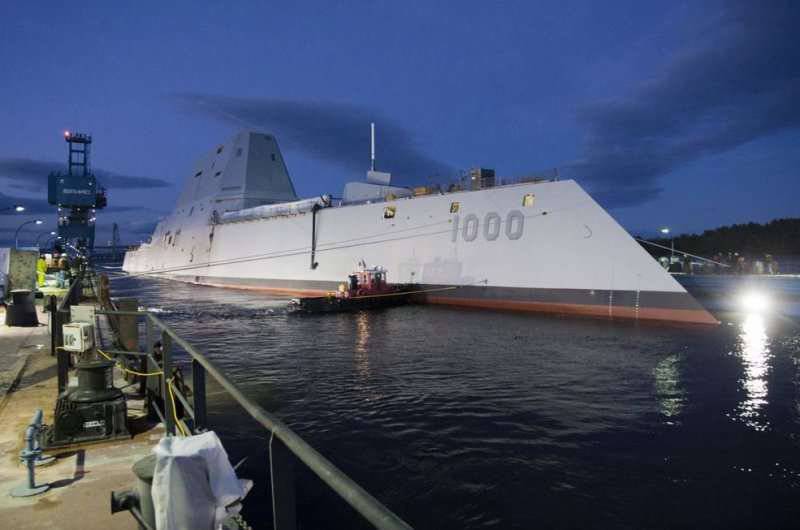 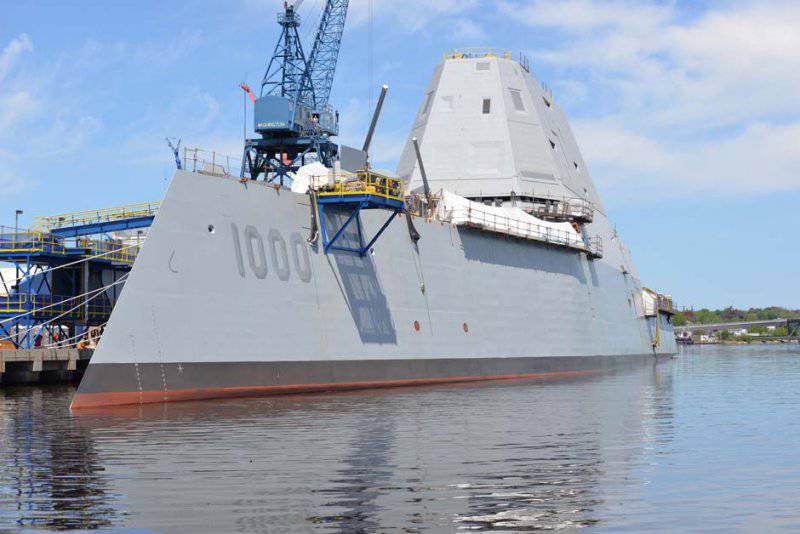 The silhouette of the ship is clearly visible from Front Street in the center of the town of Bath. For more than a hundred years of building ships at the Bath Iron Works shipyard, nothing of the kind has been seen here - the angular, slightly clumsy giant captivates with its brutality and grace at the same time

The futuristic form of Zumwalt DDG 1000 became recognizable after more than a decade of graphic presentations and artistic drawings, the destroyer models were the main exhibit at maritime exhibitions for several years. And now the ship is coming out entirely, all the structural units are assembled and launched. People walk on its decks of the ship, it rises and falls with the tide and the whole project turns into a real thing. The ship will be released for the first time in the sea next spring

Zumwalt is a model stealth ship, angular shapes give it a ship filled with new features. First of all, when you are on deck, its size is impressive - at the moment it is the largest ship ever named “destroyer”. It should be quite spacious inside.

“You know, the weight of the ship is almost 16 000 tons, length 610 feet, width about 81 feet, can you imagine how it should be roomy,” said the future commander of the ship Zumwalt captain James Kirk. “But when you climb it, you realize that it is equipped with everything necessary for work and warfare.” 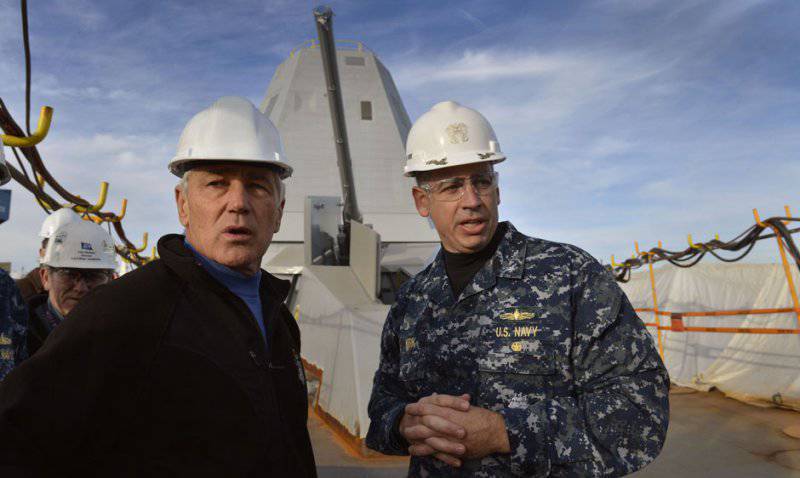 Under the decks there is a large and wide passage of the main deck, it is designed for quick and easy movement of stocks and ammunition to the storage rooms below. In front of the station, there is equipment for automatic loading of ammunition and slug stores for two naval 155-mm naval guns - the largest cannons mounted on a naval vessel since the Second World War.

The guns are placed along the centerline, on other rocket ships, installations of vertical launch are placed at this place. On the Zumwalt missile compartments are located on the side of the guns, forming a line of the hull sides in the bow and stern.

To the middle part of the ship, the pointed nose section smoothly expands, here the full-width hull is crammed with power equipment. The Zumwalt, an electric ship with an installed power of 78,5 megawatts, is an unheard of parameter for a destroyer. Power units are located throughout the ship, reminding everyone of the different nature of its integrated energy system, capable of transmitting energy from the power plant to sensors and weapons.

The bridge is located low on the superstructure at the level of O2 and will be equipped with at least three watch officers. This summer, shipbuilders installed special windows here that the water can withstand, since the narrow nose cuts the waves rather than slides along them.

Behind the bridge is the multitask center of the ship, but for now the scaffolding completely surrounds it on two levels. More team members will be assigned to it than anywhere else; some will work in the intermediate zone at the O3 level.

At the stern, a large compartment for boats is located under the flight deck, it is able to receive two 11-meter high-speed inflatable boats on a ramp, the third one “parks” from above. The doors in the flat section of the stern open, the ramp extends, from which the boats can descend and to which they can return at the ship’s speed to 13 nodes.

Around Zumwalt, there are systems that open or retract, rise or fall, many of which are classified or have a “for limited use” stamp. The stern will have a towed antenna array and a towed torpedo control system. Side doors for the transfer of goods in the course of the vessel are opened to extend the cargo handling mechanism, and special radars are raised on telescopic masts.

With the exception of the flight deck, sailors will rarely appear on the upper deck while the ship is in motion. When the ship is at sea, the guard rail of the front deck is removed. Loading and mooring posts are hidden in the hull behind large hatches.

But still, in all this technologically perfect world, one concession was made to traditions and conventions. In front of the deck superstructure there is a small mast for carrying the national banner; after the small conical superstructure with sensors was removed, its change became more convenient.

While Zumwalt is definitely different from other destroyers, Captain Kirk insists that he can easily mix with the rest. fleet.

“Although differing in many different aspects, this multi-purpose ship is capable of performing some of the tasks that cruisers and destroyers of the Arleigh Burke class carry out,” he said.

“What makes it unique is the energy it produces; viability is inherent in many of its systems, the same can be said about the instrument. This is a unique feature of the ship. ”

However, guns that were not intended for shooting at moving targets can give three ships of the Zumwalt class completely new possibilities.

“When you have ammunition in hundreds of shells, your ability to influence what is happening is much higher,” he explained. - If you have a lot of Tomahawk and 600 long-range missiles for ground attack, then you have a significant advantage. I guess this is a unique feature. ”

Yet in one of the spheres this ship will not be so powerful. This provision of air defense, cover other ships in a wide area.

“These options are limited,” Kirk admitted. - This is not the same air defense as the cruiser. But it is quite effective. All signs indicate that its air defense capabilities are quite worthy, but in the case of this ship these ranges are smaller and all this in connection with the removal of the airborne observation radar. You just do not have the capabilities that have a destroyer or cruiser with the radar Aegis SPY-1 on board. "

The flight deck of the ship is significantly larger than that of the Burke class destroyers.

"The flight deck is almost twice the deck size on the Burke destroyer," Kirk noted. - This, given the transport of special forces, is very important. You take it all together. If I needed to solve a military task, then there are definitely tasks that this ship can perform, and other ships are not quite suitable for this. ”

One serious question arises when the ship goes to sea. How does its unusual inverted hull, which narrows above the waterline, behave in the open sea?

“This hull shape gives different stability characteristics for different maneuvers,” said Kirk. I conclude from what I see, we need technical information and guidance in order to go at full speed in order to maneuver properly based on weather conditions, for example. "

Zumwalt class ships will have their maneuverability limitations just like any other ship. “If there is a certain impact of the waves at certain speeds, you can have a dynamic stability impaired,” he explained. “Then you have to be sure that you are turning at the right speed in order to limit the risks to the ship’s stability.” I am quite satisfied with what we have, we know how to steer the ship. Whatever sea we go to. ”

Changes in the project

In the Command of Naval Systems in the Navy in Washington, the program manager, DDG 1000, Captain James Downey oversees the development team that solves all the technical problems associated with the ship. He noted several key changes to the design or concept.

“In 2010, we removed the airborne surveillance radar, the S-band sensor in a two-way radar system, leaving the SPY-3 X-band radar. Raytheon upgraded it to improve its surveillance capabilities. The system installed for testing at the Flight Center on Wallops Island will be tested next year on the trial vessel Paul F. Foster, which has already been carried out a series of SPY-3 tests, said Downey. “These previous tests went very well.”

A number of other changes allowed the designers to remove about 50 tons from the deckhouse. This made it possible to go from composite to steel construction on the third ship of this class Lyndon B. Johnson. The second ship was named Michael Monsoor.

Part of the above-mentioned mass was saved due to the change in the auxiliary weapon system of the ship used for short-range defense. Initially, the 57-mm gun Mark 110 was determined for this ship, the same guns are used as the main weapon on coastal warships and coast guard boats.

As a contender for the DDG 1000, Downey also considers the Mark 30 46-mm cannon mounted on San Antonio-class amphibious assault ships. “The smaller gun weighs half as much, is half the cost and has a greater offensive potential compared to the 57 mm. I asked my team to go back and look at the issue again with this gun. ”

Studies have shown that the capabilities of the 57-mm guns were overestimated, whereas the 30-mm guns were underestimated. In these studies, a non-compliant system was identified and a system corresponding to them. ”

As a result, the bonus was the reduction in weight on 24 tons in the case of installing 30-mm guns.

The size of the crew continues to be discussed. The ship is equipped with 186 regiments or berths, the official crew is 130 people, another 28 people are assigned to aviation group. But in the framework of the program, the organization of crew accommodation with 17 additional members has already been determined, which amounts to 147 crew members, and 175 people with an aviation group, respectively.

Additional crew members, according to Downey, could join the ranks of mechanics, gunners or communication and information component. The decision must be made in a timely manner so that the strength can be included in the budget request for the 2016 year.

The rest of the places were given to the command group and special operations group. Space is provided for the squadron commander and a small staff of six officers. Another feature of the ship is that it can take a group of special operations from 14 people and their equipment.

Destroyers Zumwalt also had to command an officer with the rank of captain of the third rank as the rest destroyers. Currently, the staffing has changed and the ships Zumwalt will be commanded by the captain in a higher rank - in the same way as the commanders of cruisers.

Ships, as explained by Downey, are quite expensive with complex capabilities. This requires a very high level of training for officers and men, and therefore for a general command an officer with a higher rank is required.

The DDG 1000 destroyer program is phenomenally expensive, by the time all three ships are delivered to the fleet, approximately 20 billion dollars will be spent on them for more than 22 years, for research and development, design and construction. It was originally planned to build 28 ships, then seven, then two, and finally three, all from the same expenditure item. The US Navy claims the average cost of the Zumwalt class 3,3 billion-dollar destroyer, but numerous critics have warned that this figure could exceed 5 billion dollars apiece.

At least for today, these forecasts are not justified. So far, the cost of one Zumwalt is "approximately 3,4 billion dollars."

In the spring, the Zumwalt destroyer is expected to enter the sea, where its technical and system tests will begin, which will last the whole summer. The fleet hopes to get the ship before the end of 2015.

And even in this case, the ship will not be fully ready. There will be a revision of combat systems and computing tools. But the time will come when the big ship will head across Front Street to the Kennebec River, and the world will see a completely different type of warship. 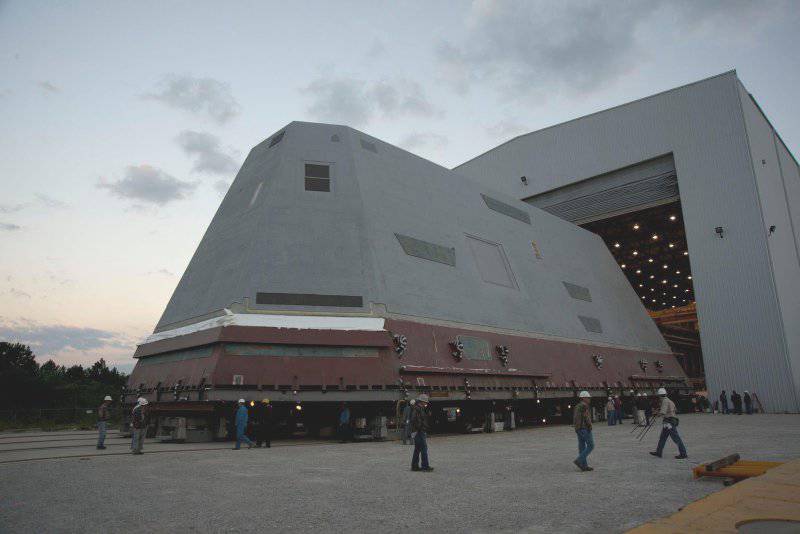 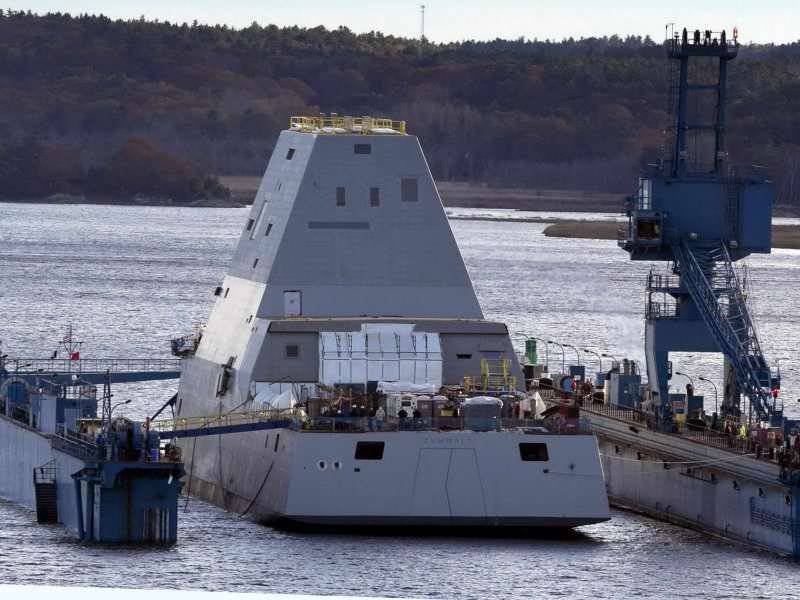 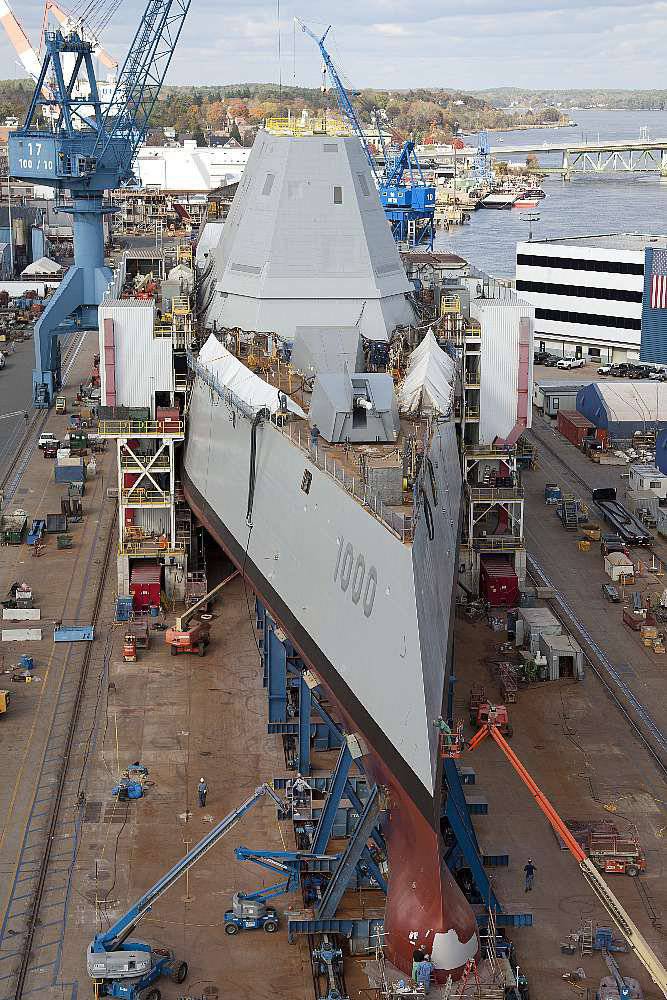 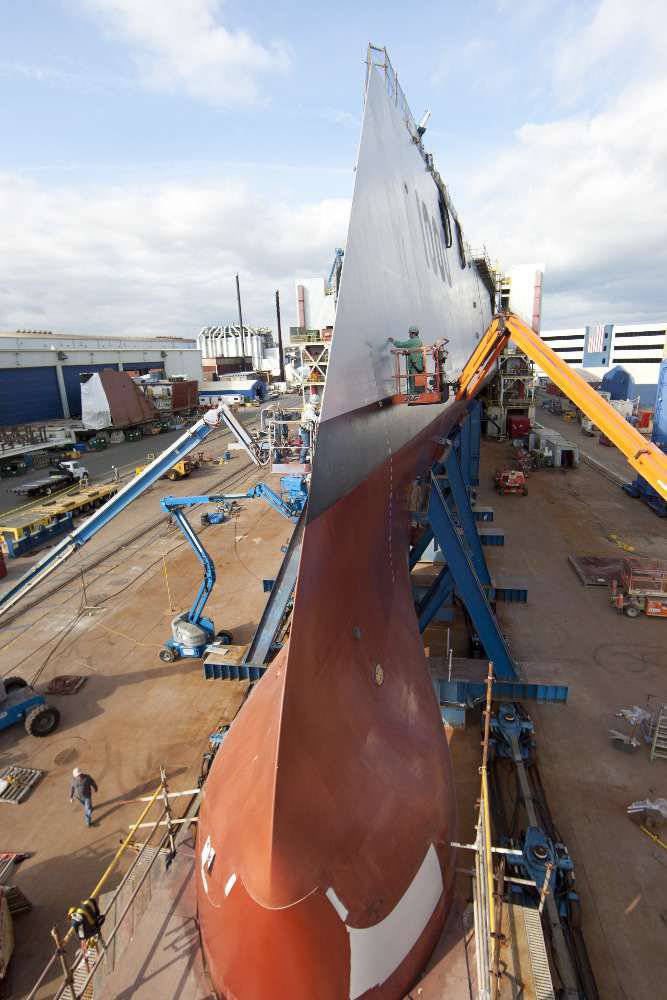