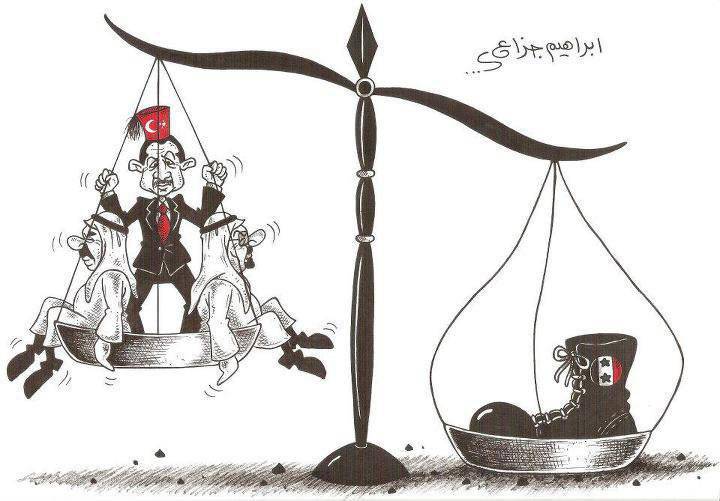 So the Turkish regime of Erdogan voiced his true goals in Syria. The objectives for which the question of a land operation in Syrian territory was submitted to parliament. Ostensibly - to fight the notorious "Islamic State". And actually?

And in fact, the new Prime Minister of Turkey, who was previously the Minister of Foreign Affairs and did a lot against Syria, spoke about the true objectives of the Erdoganov regime. In an interview with CNN, Ahmet Davutoglu stated that official Ankara demands certain guarantees from the United States to take part in the fight against the Syrian leadership: “Turkey can send ground units to Syria only if the US strategy contains plans for persecuting Assad.

Actually, Davutoglu’s call for the United States has a knock at the open door, as Washington has been doing only in recent years that it is trying to overthrow the Syrian leadership and bring the country to its knees. The only question is that the Turkish government, headed by the Erdoganov Justice and Development Party, wants more extremist methods.

“We want to create a no-fly zone. We need a safe zone near the borders. Otherwise, the whole burden of the situation will continue to be on the shoulders of Turkey and other countries in the region, ”Davutoglu continued. He literally choked with monstrous accusations against the legitimate Syrian leader Bashar Al-Assad - allegedly he "kills his people." But he did not say a word about the fact that the Syrian people are being killed by terrorists. Those most who, in the mass, have arrived just from the territory of Turkey.

In particular, now the danger of the actual genocide on the part of terrorist gangs looms over the city of Ras al-Arab (its Kurdish name is Cobane). Formations of the “Islamic State” continue to compress the ring around this city. Concerns about this were expressed even by the UN Secretary General Ban Ki-moon and the UN special envoy for Syria Stephan de Mistura. Kurdish self-defense units have vowed to stand to the death, defending the city.

The vaunted airstrikes of Americans on the positions of the IG practically do not help the real opposition to the extremists. The Kurds say that the Islamist militants are hiding in hiding places when the planes approach, and then return, again carrying death in Cobán.

One of the shells fired by terrorists in this border city with Turkey hit the Turkish territory. Four people were injured. The local authorities decided to evacuate the inhabitants of the neighboring villages - they are forced to live in tent cities for refugees. Thus, it is not the first time that ordinary citizens of Turkey are paying for the adventurous policies of their authorities, who are obsessed with the New Osman itch and are seeking a new war with Syria.

Even Vice President Joe Biden, speaking at Harvard University, was forced to tell the bitter truth - Turkey, as well as some Arab regimes (especially Saudi Arabia), provide assistance to the Islamic State militants. Then he repudiated his words and even apologized to the American "six" Erdogan and the Saudi monarch. How it came - the master apologizes to the slave! Apparently, over Biden and Erdogan other, even more powerful forces - in the face of transnational capital - which the truth is absolutely unprofitable. But, nevertheless, this bitter truth still remains true - without Turkey, such strength as this “Islamic State” would not have got stronger, about the struggle with which the politicians of the whole world are now talking.

There is an informational preparation for the so-called “ground operation against terrorists”. But, if the forces that are leading it really want to fight terrorism, a natural question arises - why not put this question in the UN Security Council? Next you need to define clear boundaries and details of the operation. But for some reason, the campaign organizers do not want to appear before the world community and carry out the fight against terrorism legally. This, coupled with the almost 4-year-old support of the terrorists, as well as statements against the Syrian leadership, makes it very doubtful that the purpose of the ground operation is really anti-terrorist.

Militants continue their crimes. In the city of Kuhnaya in northwestern Syria, they took the Franciscan order priest and 20 other Christians hostage.

In the east of the country in the city of Hasak there was an explosion of a mined car in the Al-Mahlyadj area - four dead, 23 victims. In addition, in the north of the same city, in the area of ​​At-Talay, bandits laid a "hellish car" on the highway. The explosion killed one person.

Meanwhile, the Syrian army continues not only in words but in deed to fight terrorists. The villages of Zur and Suran have been liberated in the province of Hama. Among those eliminated are many mercenaries from Arab and European countries. A terrorist training camp was discovered, in which a multitude of ammunition was found, weapons and extremist Wahhabi literature.

The Syrian people, of which the army is an integral part, do not believe in American good intentions or in Turkish efforts. And he continues to liberate the country with his own hands.