Andrei Safonov: “Trinity Union” of Romania, Moldova and Ukraine against Russia and Transnistria 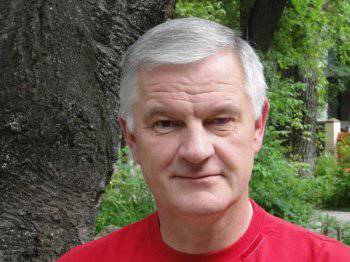 A meeting in Kiev of the president of Ukraine with the prime ministers of Romania and Moldova says that Bucharest, taking advantage of the patronage of the United States, has knocked together a “Triple Alliance” directed against Russia and Transnistria.

Romania goes on the offensive

October 2 in the capital of Ukraine was a landmark event. The President of the country Petro Poroshenko received guests - Romanian Prime Minister Viktor Ponto and Prime Minister of the Republic of Moldova Yuri Leanca. And although the Romanian prime minister, claiming the presidency, acted as a visitor, but in fact he played the first violin.

Earlier, Kiev held a verified and cautious position in relations with Romania, which does not hide its work on the mass issue of Romanian passports to the population of Northern Bukovina. True, when Ukraine was led by pro-American President Viktor Yushchenko, Kiev agreed to take a suicidal decision to trust the UN International Court of Justice, which was designed to judge: who owns the shelf with gas fields in the area of ​​Snake Island, which Romania longed for in Soviet times ... to send the Romanian side to hell and say that if Ukrainian gas is so necessary for Bucharest, then the heirs of Ion Antonescu will try to get it, the administration of Viktor Yushchenko entrusted Smiling office, which runs the West, a military ally that Romania is. The result is well known: the jubilant Romanians are mastering the field, which was given away by the Ukrainian leadership.

Now Romania is clearly not going to stop on some shelves and some islands. She is interested in something more.

Nationalism and the desire for territorial expansion are characteristic of all the Romanian authorities, regardless of their party and political affiliation. The leaders of recent decades are no exception. Romanian President Traian Basescu declared the unification with Moldova the “national idea” of his country. Prime Minister Victor Ponta said that this unification could occur by 2018. He exclaimed: “On the centenary anniversary of the unification, I would like to be the president of the country. Let's make the second great unification of Romania together. ”

Usually, “unifying shame” in Bucharest is covered up with “fig leaf” clauses - they say, this is not about the banal seizure of foreign territories like the occupation of Moldovan and Ukrainian lands in 1918 or 1941, but about “reunification of a divided people within the European Union”. The essence of this, however, does not change.

But previously, Romania’s creeping expansion met with a cautious attitude in Kiev. This was due, among other things, to the fact that Ukraine was maneuvering between Russia and the West, and therefore tried to protect, albeit, at times, timidly, its national interests. After the February 22 coup of 2014, the current official Kiev and Bucharest have one unconditional landmark - Washington. This led to the rapprochement of Ukraine and Romania in the interests of Romania and, in fact, on the terms of Romania. The reason is simple - Bucharest feels authorized by the American policy maker in the southwest of the former Soviet Union.

In a way, today Bucharest is a subject of regional politics, while Kiev is a distinct object.

But back to the capital of Ukraine in the first days of October. At first, the Romanian Prime Minister met with the Prime Minister of Ukraine, Arseniy Yatsenyuk, and his Moldovan counterpart, Yuri Leanca. At the same time, Victor Ponta designated his protective status in relation to Kiev and Chisinau, stating: “We have a dream with Prime Minister Leanca - that in 2019, when Romania will preside in the EU, Moldova and Ukraine were also at the table.” Meanwhile, it is clear that this is a bluff, since many times already the official representatives of Brussels have stated that the European Union, which is experiencing a serious crisis, from which the Great Britain has been thinking of withdrawing lately, will not expand for a long time (if it will expand at all).

In unison, Viktor Ponte, who became Prime Minister of Ukraine Arseniy Yatsenyuk after the coup of February 22, fixed the first steps to create a similarity to the Triple Alliance: "The regional unity of Ukraine, Moldova and Romania is very important for economic development, stability and security in this region."

Naturally, in such a situation, the Transnistrian issue raised by Moldovan Prime Minister Yuri Leanca could not help surface: “We need to take all the necessary measures to prevent the emergence of a new frozen conflict in this zone, this time in Ukraine. Who does not know what a frozen conflict is, I invite you to us in Transnistria, you will see how dangerous it is not only for the country in whose territory it occurs, but for the region as a whole. Considering these specific circumstances, I once again confirm the need to develop cooperation in such a regional tripartite format. ”

Thus, it is logical to conclude: the West, primarily in the face of the United States, is trying to form the axis of Bucharest-Kiev-Chisinau to put pressure on the PMR and pushing Russia’s influence from the former Soviet Moldova through this pressure.

In Bucharest, they again dream of "Great Romania"

But in stories it was always the case that, having joined the games of the big powers and blocs, Romania pursued its own goals and defended its own interests. In this case, in our opinion, we are talking about a strategic goal - joining the entire former MSSR (Moldova, including Gagauzia and Transdniestria) to Romania, as well as Northern Bukovina and, most likely, Southern Bessarabia.

Tactically, Romania is interested in using the emerging “Trinity Union” to subdue Tiraspol with the help of Chisinau and Kiev, and then take the whole “bank” in the form of the former Soviet Moldova. Some symptoms of such actions can already be viewed. Thus, the media passed a message that the Moldovan border guards refused to allow entry into the Republic of Moldova 6 to Russian officers who were sent to serve in the Transdnistrian Moldavian Republic. Earlier, the Russian military could arrive in Transnistria through Ukraine (however, in this case, from the point of view of the “Republic of Moldova”, they were “illegally” on the territory of the Transdniestrian Moldavian Republic - REGNUM news agency), but now this option is impossible. Thus, it can be assumed that the basis for the weakening of the Russian group in Transnistria can be taken by a method in which there will not be admitted to the military, arriving on rotation, as well as returning from holidays. As a result, Western puppeteers of this policy are counting on, Russian troops will gradually disperse like smoke.

Well, then it will be possible to announce ultimatums to Tiraspol about the recognition of the supreme power of Chisinau, and only then recall the 2018 year as the 100 anniversary anniversary of the “Great Reunion”, as they like to call the Romanian occupation of Moldova in 1918 in Bucharest ...

October 2 meeting with the prime ministers of Romania and Moldova Petro Poroshenko said: "We must coordinate our positions, both in the field of security and in economic cooperation and use all the opportunities provided by an in-depth and comprehensive free trade area with the European Union." According to him, "Romania can become a bridge for Ukraine and Moldova on their way to the European Union." Thus, he actually acknowledged that in the complete reorientation of Ukraine to the West, Romania would play for Kiev the role of either the elder brother or the guide.

Romania is quite satisfied with this role, because it enables Bucharest to strengthen its position on the Dniester, as well as in the regions of Ukraine of interest to Romania, without fear of serious opposition from Kiev, not to mention Chisinau. In which case, the West will shout at too zealous politicians of Ukraine and Moldova, who will think too hard to defend the national interests of their countries.

In order to paralyze the activities of those who see a threat to the true Ukrainian interests in this situation, the West and Romania are now strongly encouraging information stuffing, saying that the MRT is going to attack Ukraine and move to Odessa. A psychosis is fomented, a moat is being dug at the friendly Transnistrian-Ukrainian border as a symbol of madness and zombies, and residents of Odessk region are urged to dig trenches designed to help repel the attack, which Transdniestrians, naturally, do not think to commit. Of course, in this situation, Romanian politicians and intelligence officers feel like a fish in water. Separate Russia, Ukraine and Transnistria, and rule in the region!

Will Kiev and Chisinau be led by Bucharest?

Official Chisinau is trying not to lose all caution in the current difficult situation. Thus, the head of the Bureau of "Reintegration" of the Republic of Moldova, Georgy Balan, assumes that "it is likely that joint consultations of the relevant departments of the parties will be held in the near future" on this issue (referring to Moldovan-Russian consultations on the issue of passing Russian OGRF troops into Transnistria - approx. IA REGNUM).

But Romania is going ahead, feeling the geopolitical chance, which is given once in a century. Valeriu Zgon, Chairman of the Chamber of Deputies of the National Assembly of Romania 3 of October, hot on the heels of the Kiev meeting, hurried to declare: "The EU representative on the eastern border is Romania, and from this position we have to assume the role of exporter of European principles and values ​​in the area outside the community." According to the speaker, Romania “must continue to be a factor of stability in the region.”

So, Romania’s claims for regional leadership and the formation of the “Triple Alliance” in the form of the Bucharest-Kiev-Chisinau axis are announced. The direction of this supposed union from the point of view of Romania is obvious. This is the taking of Transnistria in ticks and the ousting of the influence of Moscow from the banks of the Dniester. Now the question is whether most politicians in Ukraine and Moldova are aware that this combination is being played out in the interests of a country that has already occupied their lands more than once.