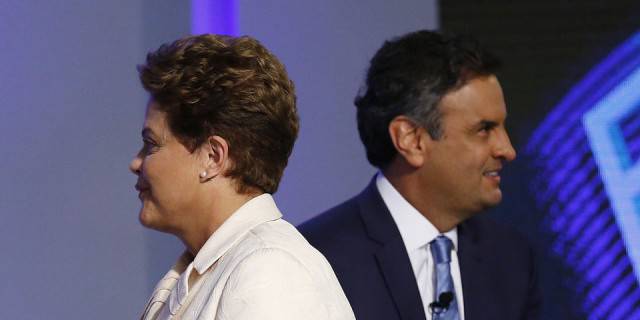 After the first round of the presidential election 5 in October, the election campaign in Brazil has become even more acute. Marina Silva, on whom Washington and the opponents of the current president, Dilma Rousseff, were put, could not keep up: she was supported only by 21,3% of voters. At the final stage, Dilma Rousseff, who is running for the center-left Workers Party (41,4%), and Aesio Neves, candidate of the Social Democratic Party of Brazil (33,7%), representing the interests of pro-American circles, continue to fight for the presidency. The winner will be determined 26 October.

The confrontation will not be easy. Major US and Western European news agencies are voting for Neves, he is an opponent of the policy that the Party of Workers in Brazil has been implementing for 12 years. Neves began his political career in 20 years, being secretary-commissioner for his grandfather, Tancredo Neves. In 1985, he was to become the president of Brazil, but died due to an infectious disease, without taking office. Aesio did not give up his ambitions and successfully overcame the stages: he was a deputy, the governor of the state of Minas Zherais, a senator. His “presidential image” was gradually formed: the dialogue master is not shy, the master of coalition combinations, has the gift of persuasion; he is a flexible politician, knows how to promise everything at once, skillfully maneuvers, and according to the results of the maneuvers is able to solve any issue in his favor.

To seize power and create the conditions for its retention in the interests of big capital - this is the task facing Neves and his team. The propaganda that supports it is focused on the thesis that “the people are tired of the dictates of the Workers Party”, which is unable to revive the “stagnant” economy, solve problems in health care and education, in the fight against corruption. A weight to the right and to the left promises that he will bring order with an iron hand, starting with a radical reduction of the ministerial staff. The number of ministries themselves presidential candidate also intends to reduce by half. Neves promises to grant independence to the Central Bank and assures that he will not interfere in the economy: "There is no regulation from above: business activities must be free." Neves blames the Dilma government for a slump in production, promises to boost GDP growth through “well-designed” economic reforms and a modernized tax system. He promises a lot of things, and this avalanche of promises, sweetened by the standard-advertising smiles of Neves, is already beginning to alarm. Skeptical responses to his speeches began to appear in the media: this person cannot be trusted.

In the light of the indisputable achievements of the governments of Lula and Dilma to strengthen the position of Brazil in the countries of South and Central America, in the Caribbean region, Neves speaks very carefully on international themes. And yet, what will be the foreign policy of Brazil in the event of his victory?

Neves does not deny the benefits of MERCOSUR, but considers it appropriate to make “adjustments” in the statutory documents of this trade and economic bloc so that Brazil can conclude strategic agreements without looking at the Charter. In fact, we are talking about concluding a bilateral agreement with Washinton on free trade. Neves intends to intensify ties with the industrially developed countries of Western Europe and Japan, to take steps for rapprochement with the Pacific Alliance created in the interests of the United States. Therefore, he speaks very vaguely about Brazil’s relations with the countries of the Bolivarian Alliance for the Americas (ALBA), including with Venezuela, Cuba, Ecuador, Nicaragua and Bolivia.

In the pre-election speeches of Neves, threatening notes were sounded to the neighbors about their "involvement in the production and transfer of drugs" to the territory of Brazil. The United States is also looking at this problem: everyone, except us, is to blame for drug trafficking! At the same time, the relevant services of Bolivia, Venezuela, Peru, and other countries closely cooperate with Brazilian ones and achieve considerable success in the fight against the drug business. Tons of hallucinogenic substances were destroyed during joint operations. The very tone of criticism of Neves in relation to neighbors leads to the isolation of Brazil in the Latin American continent. So, Neves has already threatened Bolivia: the country produces four times more coca leaves than is required for domestic consumption (thesis of Washington), and the authorities of Bolivia will have to take action, otherwise no benefits and credits!

Analysts are unanimous that in the second round Brazilians will have to choose between two different socio-economic models. Over the past decade in Brazil there have been major socio-economic changes, the standard of living of millions of Brazilians has increased. The fight against poverty, racial and other types of discrimination, corruption, the creation of new jobs, conditions for professional growth for young people. Even the Western media admits that social reforms of such magnitude as in Brazil are not carried out in any other country in the world. The political support provided by the Dilma government in Latin America also plays its role. Her public rebuff to Obama in the US espionage scandal was perceived on the continent as proof of the leadership qualities of the Brazilian president.

In the case of Neves' victory, many socio-political gains of the Workers Party will be put at risk. Brazil's integration projects will be revised in the light of new “partnerships” with the United States. The neoliberals around the world are one person: they promise a lot on the way to power, diligently imitate the care of a simple person, draw pictures of future prosperity, but then they come across the banal theft of public funds, fraud or betrayal of national interests. “Neoliberals are dangerous for the country,” warns Dilma. She reminds voters that the Aesio Neves Party was in power three times and Brazil crashed three times: “We don’t want Brazil to go back and [again] kneel before the International Monetary Fund”.

Neves considers himself a rational warehouse politician. True, in his youth, spinning in the circles of the “golden youth”, he indulged in drugs and had a good deal of fun, which he doesn’t like to remember now. Among those who are affected by his appearance of the hero of the television series, the penetrating gaze and the red-beatenness, Aesio was reputed to be a ruler, playboy, ruthless conqueror of women. Until now, in the yellow press, photographs compromising him have been made at his home in Rio de Janeiro, located in close proximity to Ipanema Beach. He is well remembered in the fashionable discos of Leblond, one of the richest areas of Rio. Psychologists, analyzing the behavior of Neves, note narcissism as its main vice, and hence the inability to solidarity with other people.

From the first marriage, Neves has a daughter, he has a second marriage with the model Leticia Weber, who is younger than 20 and recently gave birth to twins. Evil tongues claim that the replacement of the life partner was caused by image considerations. No wonder Leticia constantly appears in commercials spouse. Posters with white teeth and good-natured smiles Neves flooded all of Brazil. Will the advertising of teeth help him to win, we will soon see ...