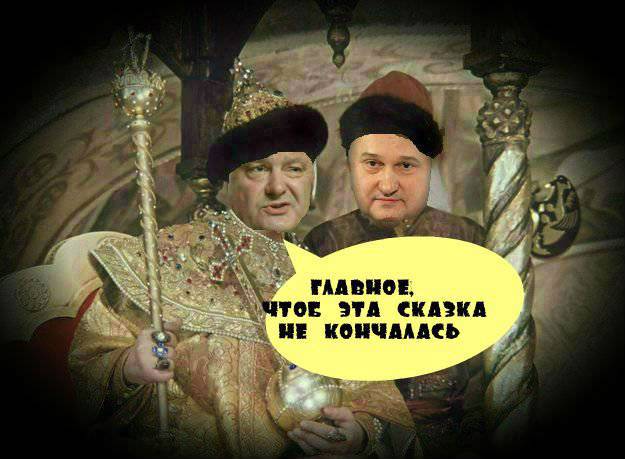 An intelligence committee will be set up in Ukraine. This stunning idea visited Poroshenko’s head exactly after a visit to the Square of the Old Woman Nuland. It is even known who will lead the new structure. Igor Smeshko, the Ukrainian political and state leader, the leader of one of the parties, the colonel general, one of the former leaders of the SBU and the former military attache of Ukraine in the United States, will take the position of head of the Intelligence Committee. It seems that in the current Square all the tracks lead across the ocean ... 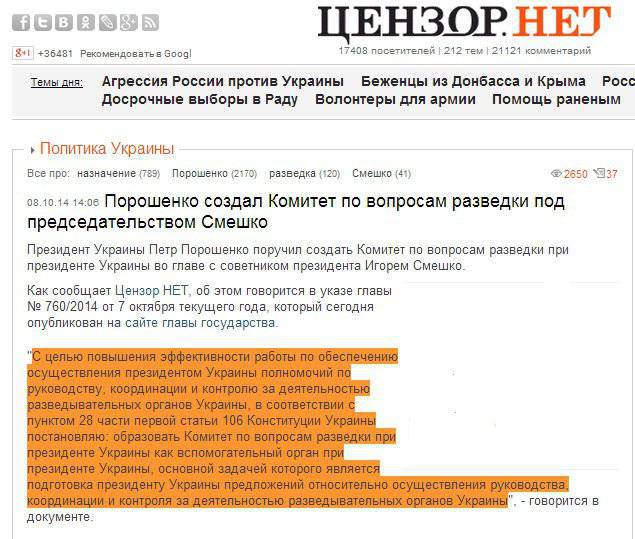 As English-speaking Wikipedia notes, Smeshko is one of those who "played an important role in preventing the fraudulent election of Viktor Yanukovich and directed the Orange Revolution to a peaceful course."). Among other things, behind Smeshko - special courses in the UK and in the Graduate School of Public Administration. J. Kennedy at Harvard University, as well as training at the Royal National Defense College in Stockholm. In addition, Smeshko managed to establish business relations with Washington and the Pentagon. So, on materials www.cripo.com.ua, thanks to the efforts of Smeshko, back in 1993, the first Memorandum of Cooperation between the military departments of the United States and Ukraine was signed.

An article titled: "IGOR SMESHKO: THE SKILL OF HOLDING A BLOW" (28.04.2005) on the above site it is noted:
"... You should pay attention to the fact that even during Igor Smeshko's stay in the USA by decree of the President of Ukraine he was given the rank of Major General. Moreover, in the 1995 year (at the time Smeshko was still at diplomatic work) he was appointed chairman of the Committee on Intelligence under the President of Ukraine. " 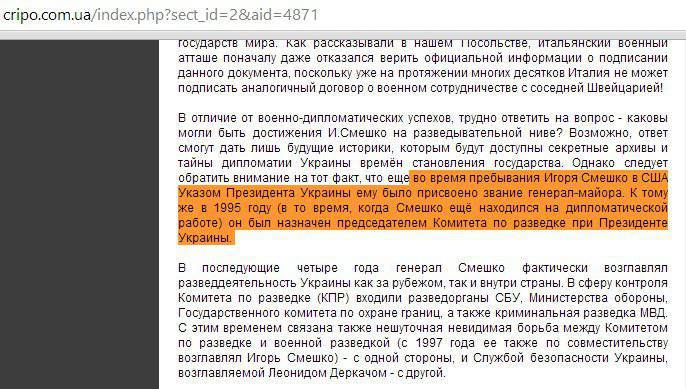 For what such services to the fatherland Smeshko in a flash turned from a colonel to a major general - a mystery covered in darkness. However, it is known that two years before that, at the end of 1993, an important conversation took place between then-military attaché Smeshko and important people in Washington.


"December 6 (1993) of the year, during a meeting of the official delegation of the Ministry of Defense of Ukraine headed by Lieutenant-General VP Shkidchenko, a private conversation took place between the Ukrainian military attache Colonel I. Smeshko and Dr. Sherman Garnett. During this conversation, the latter declared that the US government circles have practically completed the development of a decision on supporting the existing state structures of Ukraine and personal support of President L. M. Kravchuk in a crisis situation in Ukraine ... In particular, there is a plan invite President L. Kravchuk of Ukraine in February 1994 to come to the United States on an official visit. During this conversation, Dr. Garnett stressed the special role of the Pentagon in making this decision ... " 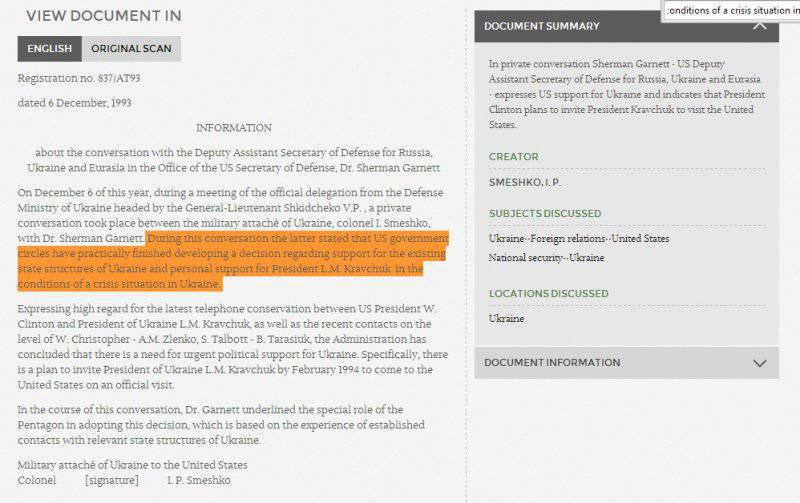 It is noteworthy that a month later, in January 1994, the CIA published an eerily-entertaining report. In it, the Yankees threatened Ukraine with the inevitable collapse of reforms, followed by the mandatory deepening of "ethnosocial contradictions with their subsequent escalation into armed confrontation." From the report it follows that:
"... Among the Russian-speaking population of the eastern regions of the republic, sentiments in favor of uniting with Russia will prevail. But the Ukrainian population of the western regions will continue to defend independence and strive to prevent the growth of pro-Russian geopolitical sympathies. The authors do not exclude that the Russian army can also intervene ". 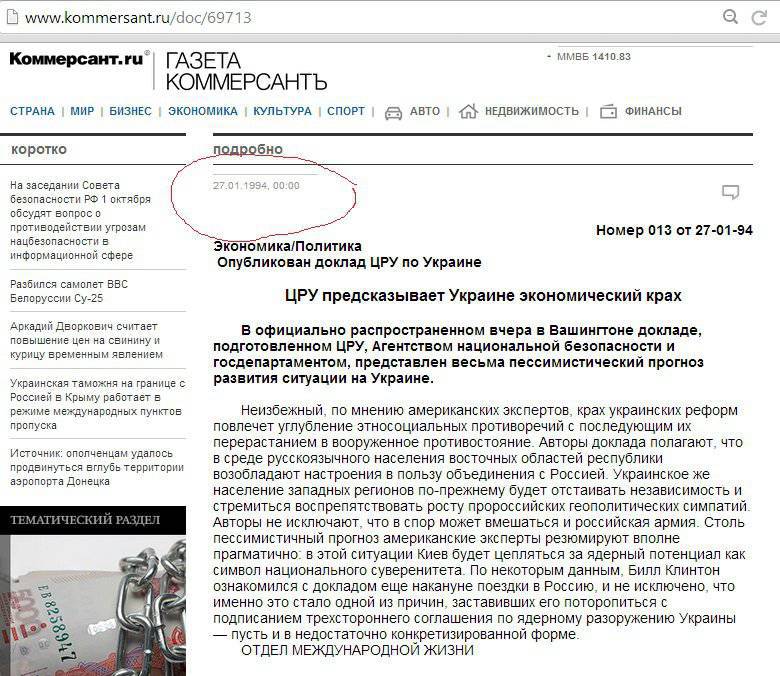 Six months later, in July of 1994, elections began in Ukraine, and the first change of government took place in the country. Kravchuk assumed the post of supposedly “pro-Russian” Kuchma, who, contrary to his former words, the expectations of Russia and Ukraine, suddenly headed for the West. Kuchma made his very first visit as President to Canada, where he signed a loan agreement with the IMF. And then he went to the United States for a meeting with Bill Clinton.

What was Smeshko doing at this time? Up until July, 1995 served as military attache for the defense of Ukraine in the United States. The internet resource ord-02.com in the article “Compromising Ukraine and Russia” writes:
"Not a single transaction of diplomatic, economic and business circles of Ukraine with the United States took place without the participation of I. Smeshko."

Just before the end of his service in America, Smeshko received the rank of Major General and went back to his homeland. There, the ex-attaché waited for the position of chairman of the Committee on Intelligence under the President of Ukraine, and then the head of the Main Intelligence Directorate of the Ministry of Defense. In 2000, Smeshko is “exiled” to Switzerland - by the military attache and concurrently the Permanent Representative of the Ministry of Defense of Ukraine at international organizations in Geneva ... And then - the leading position in the SBU ...

However, let's digress from the biographical details and pay attention to the outrageous fame of Smeshko in the world. For example, the web site whoswho.com.ua, dealing with disclosures, claims that in 1998, Smeshko and a couple of his accomplices sold Thor anti-aircraft missiles to Ecuador. And allegedly in February 2002, the General Prosecutor’s Office of Ukraine even opened a criminal case on the fact of smuggling weapons. Then the case was hushed up ... 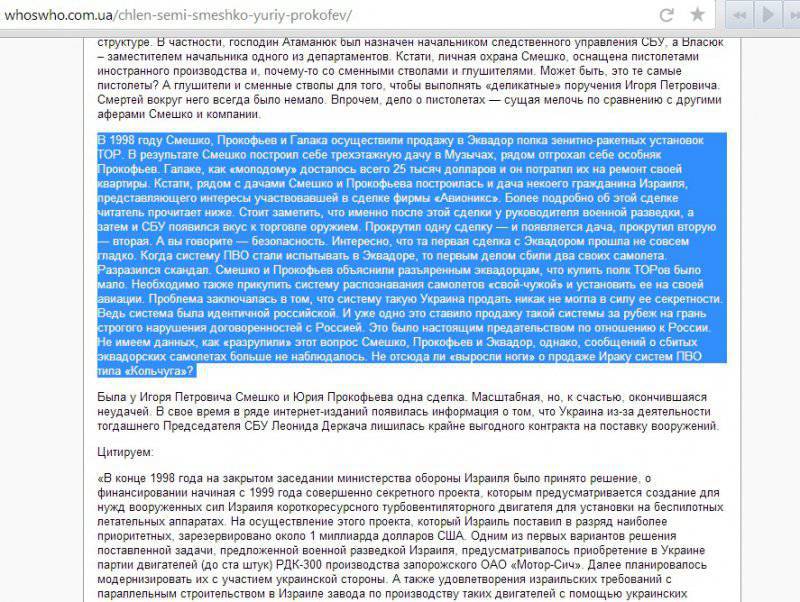 In the 2009 year around the personality Smeshko again broke serious scandal. The published book of journalist Kenneth Timmerman, The Warriors of the Shadow, stated that it was Smeshko who informed the United States and Great Britain that the Iraqi weapons of mass destruction (WMD) had allegedly been taken out of the country to Syria and Lebanon with the help of Russian special services. Apparently, Smeshko tried thereby to justify the failure of the CIA and the Pentagon in the military operation in Iraq. Timmerman’s book says that Smeshko even told the dates, names and venues of the meetings where the transfer of weapons of mass destruction to Russian special forces officers was planned. Later this information was refuted by a number of other sources, including the military.

And in March, 2014 in an interview with French "Le Figaro" Smeshko threatened troubles Russia and Putin for a possible invasion of Ukraine.

... If Yushchenko and Yanukovych scout Smeshko gone headlong into politics. He even created and headed the organization "Strength and Honor", and then the party of the same name. And, it seemed, he broke away from the affairs of the military. But the revolution was accomplished, followed by the war broke out, and Smeshko again useful.

Poroshenko’s press secretary, S. Tsegolko, said through the social networks that the head of Ukraine yesterday set Smeshko the task of “objectively informing the army, country, and the world regarding war and threats” ...