Double standards of the West. On the situation in Syria 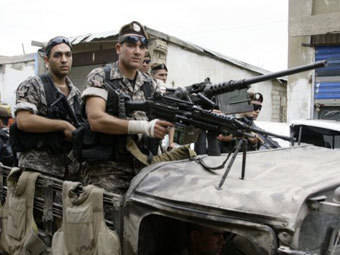 Events in Syria and the reaction to them so-called. The "world community", which usually means the states of the West and their satellite countries, provides an excellent picture, allowing you to see the system of double standards in the Western world. Thus, the events in the Syrian city of Hama (their “massacres” lauded in the West) caused a harsh reaction from the countries of the Western world, an emergency convocation of the UN Security Council was convened, which eventually adopted a statement expressing deep concern about the “deterioration of the situation in Syria and regret the deaths of hundreds of people. " Syria was convicted for "numerous violations of human rights by the Syrian authorities." True, at the same time, the Security Council demanded that the demonstrators stop the “acts of retaliation”, including attacks on state institutions.


This is the first joint statement by the Security Council since the beginning of the unrest in Syria. It does not have the force of a resolution; Berlin, Paris, London and other Western countries, Russia and China are still against it.

Double standards of the West

The Western world is overwhelmed by hysteria over the events in the city of Hama, it is the third largest city in Syria. The essence of events - the president of the country decided to restore order there, the operation led to several dozens of victims. Prior to that, he was in the hands of the Islamists, who broke transport links. One of the leaders of the "rebels" - Sheikh Arura, whose people during this period hunted for supporters of President Assad. The patience of official Damascus burst when 30 July was given the world cadres, as the gangsters dumped the bodies of those executed into the river. A military operation began in the city, where "peaceful citizens" put up armed resistance and introduced armored vehicles.

The same situation can be traced in other cases - in the area of ​​the city of Homs, Islamists killed and dismembered 11 Alavites (Alawites are a special group of the population, Muslim sect, constitute the political, military elite of Syria), the frames of this event were posted on the Internet. The Western media and the Al-Jazeera channel did not show these materials, as the officers' club did not show, where "peaceful demonstrators" burned people alive. Also, censorship processes the speeches of the leaders of the "rebels", so, Arur promised to "feed Assad's supporters to the dogs." And this is a terrible insult in the Muslim world, equal to the promise to feed the pigs, in the Middle Ages it was a terrible penalty.

Thus, Western countries, when they need a convenient enemy, are fighting with the Islamists, as in Afghanistan and Iraq, and when they need to dump legitimate power, they use them as their “ram.” Without noticing the crimes of the bandits (who are called noble rebels), the forced actions of the authorities, who are simply trying to restore order, return areas, cities to normal life. Indeed, in the plans of the global restructuring of the entire region - the Middle East, the old states should fall in the interests of the Anglo-Saxons, Israel and Saudi Arabia.

Therefore, in order to hide their true plans, in the West they unleashed a powerful information war, which continues to intensify, then subside (wave method) for more than one month against Syria (and against Iran, Belarus, Russia, all other relatively independent countries) . Crying about the "innocent victims of the tyrant," and demanding more pressure on the "bloody regime." Serious pressure is on Moscow and Beijing to give Syria to be torn apart by the pack of world predators.

Although it is clear that if the armed gang seized the third largest city in the United States or in France, the actions of the authorities would be harder than the actions of Assad, he would wait a few more weeks. Therefore, Assad does not have a choice - he must suppress the actions of the Islamists, until they turn into bloody chaos across the country, with the participation of Kurds and other national and religious groups. After all, Islamists have the strongest intentions: “Alawites to the graves” (approximately 11% of Syria’s population), destroy Assad’s regime (that is, complete change of elite, and this is chaos and anarchy for many years), expulsion of Syrian Christians, establishment of an Islamic state. Therefore, Assad has only two ways: to save the country with the most stringent methods or to flee, leaving the country to the mercy of fate. The last time he had to do this was his father, Hafez Asad, who in 1982, after the Islamists assassinated him and massacred Hama, destroying the families of officers of the local military school, destroyed the bandit abscess; after three weeks of fighting, the remnants of the Islamists were corroded from chemical underground communications weapons and the diesel fuel set on fire (according to various sources, thousands of people were destroyed from 10 to 40). These are the traditions of the East, the tougher the leader, the more stable the majority of the population can live. This massacre has allowed Syria to live in peace in fact three decades.

What does the UNSC statement say?

Most formulations are common chatter, "let's live together" verbiage. But there is a very dangerous phrase for Damascus: "The Syrian authorities must take measures to alleviate the humanitarian situation, stop using force against the affected cities and provide prompt and unhindered access to the victims by humanitarian organizations." All these actions will automatically lead Syria to the scenario already described - chaos and death, a massive genocide on religious grounds that threatens Alawite and Christians.

The cessation of the use of force will intensify the actions of the opponents of the Assad regime, who will feel the support of the world community, will believe in their impunity. The Assad regime will show its weakness in front of the inner “fifth column”. The access of “humanitarian organizations” is the access of emissaries of foreign special services who will continue to “rock the boat”. In fact, Assad was demanded to commit suicide, a favorite method of the Western world, which exerts informational pressure, presses the will to resist. These technologies were tested in 90-s in Yugoslavia, Chechnya.

The West will not stop there, there will be other requirements, so 4 August Alain Juppe (French Foreign Minister) reported that the UN Security Council could take more stringent steps if the situation did not improve. Those who believe that NATO is bound by actions in Libya, Iraq and Afghanistan are wrong. Powerful forces can use against Syria: US Navy strike groups in the Mediterranean Sea and the Persian Gulf; the armed forces of Israel and Turkey, and very few people can blame their army for poor combat training; after their strike, Damascus will be doomed; use, as in Libya, the internal "fifth column" - the Islamists, plus play the "Kurdish card."

Jerusalem does not even have to declare war, de jure it is already at war with Syria. A blow to the Syrian state of Israel will solve several problems at once: it will solve the problem of the return of the Golan Heights; eliminate the hostile regime; will hit Iran, depriving him of an ally; will create problems for hostile movements - Hamas, Hezbollah, who are assisted by Damascus. Ankara will solve a territorial dispute with Damascus about the Sandret Sand of Alexandretta, and part of the Turkish elite generally consider Syria to be their territory, which they took in 1918 year.

Syria is rapidly turning into a new front of world war, where powerful forces will be involved, the interests of the main planetary players are affected. Asad is actually already outside the law, he needs to destroy the “fifth column”, while preparing for a strike from outside.

We are in Yandex Zen
Situational analysis of the death of the MH17 flight (Malaysian Boeing 777), made on the basis of engineering analysis from 15.08.2014
Results of the week. “Yes, everything is so. Everything! They saw, condemned, waved, potryndel, smoked - and that's all. And everything is so ... "
14 comments
Information
Dear reader, to leave comments on the publication, you must to register.