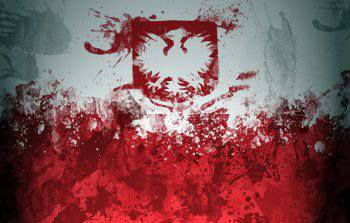 September 20 resigned Radoslaw Sikorski, Minister of Foreign Affairs of Poland. 22 September, he made his farewell speech. Yes, yes, this is the man who described the foreign affairs of his homeland with a capacious phrase: “We suck the Americans like the last fraers” and told the restaurant about the low self-esteem of the Polish people. No, no, one should not think that Sikorsky was infringed upon in office by the very people who did not like his words. Radoslaw already sat in a new chair - the speaker of the Polish Sejm.

It was quite a profitable permutation for all the actors: before, Eva Kopach was the speaker, and now she is the prime minister; Sikorsky left the government, but became the second person in the state after the president. This is the case, at least according to the Polish constitution, which, like no other, takes into account the will of the people.

Thus, one should assume that the policy of “sucking Americans off” and lowering people's self-esteem will continue.

True, the world community learned through the press that Sikorsky was allegedly "fired" for his restaurant "swearing." But such statements are not worth a penny, especially after the new chair, which Sikorsky had already warmed a few days later.

There are also rumors that the renewed Polish government, having expelled Sikorski from its ranks, decided to change the anti-Russian rhetoric. Late, of course, the apples have already rotted ... But, they say, now the Poles will be engaged not in foreign policy, but internal.

It would be nice. It would be good if in general all the states of the world are engaged in just such a policy. Starting in the USA.

In his farewell speech at the Polish Foreign Ministry 22, September, Mr. Sikorsky quoted Winston Churchill as saying: “Do you have any enemies? Good. It means you had something to defend in your life. ”

What kind of enemies did Sikorsky mean? It is not difficult to guess - Russian.

Working for seven years as a foreign minister, Sikorsky held a firm position and objected to “Russian ambitions” in Eastern Europe.

In 2009, he and Carl Bildt, the then foreign minister of Sweden, created a European Union program called the Eastern Partnership, which was launched in order to "promote cooperation with Ukraine", as well as five other post-Soviet states.

In February, 2014, at the height of euromaidan in Kiev, was precisely Sikorsky who helped conclude an agreement between the opposition and Viktor Yanukovych. (Surprisingly, the day after the agreement, Yanukovych fled.)

The hostility between Moscow and Kiev grew and spread, it came to military confrontation, and Sikorski turned out to be the most vehement supporter of strengthening Ukraine’s ties with Europe. In his opinion, Ukraine should have closer ties with the West.

Under Sikorski, Poland played an important role in the implementation of European sanctions against Russia.

The journalist asks a logical question: so what, Sikorski left the post of foreign minister, and the militant Polish foreign policy left with him?

The question is all the more logical, since the former Prime Minister of Poland, Donald Tusk, was also an "active supporter of Ukraine." Now he became president of the European Council. Grzegorz Schetyna, who lacks international experience, became the minister of foreign affairs, the journalist writes.

For European leaders who prefer a softer stance towards Russia, as well as the Kremlin, such changes may seem encouraging. In addition, the new Polish government has already announced that it intends to pay increased attention to domestic policy, and not at all to the crisis in Ukraine. Both Kopach and Shetyna both have already hinted that they are not inclined to actively support the policies of the previous government in Ukraine.

But who is Shetyna? Previously, he was Minister of the Interior and Speaker of Parliament. But he lacks the international contacts that his predecessor had. Sikorsky was educated at Oxford, but Shetyna - it is not even clear whether he speaks English. Sikorsky was prolific in Twitter, and Shetyna does not even have an account there. (The Ministry of Foreign Affairs has already confirmed that all of the Shetyna accounts existing there are fakes.)

But what does Polish society think about foreign policy?

According to a survey conducted CBOS in mid-September, 2014, 78% of Poles believe that the situation in Ukraine threatens the security of Poland. Answering the question of how the international community should respond, the largest number of respondents answered that they needed pressure on Russia (79% of respondents) and imposing even tougher economic sanctions on it (69%). But this is curious: although more than half of the respondents believe that the UN, the EU, NATO and the US should play a more active role in trying to resolve the conflict in Ukraine, only 20% said that Poland is not doing enough.

And it is here that the publicist, the source of the accent of the new leaders of Poland, who aimed at a kind of harmony between realities and public sentiments, notes.

Obviously, the journalist is skeptical about the likely changes in Polish foreign policy. Not without reason, she quotes a recent statement by Schetyna in an interview with Polish television: "I will try to make corrections ... but I intend to continue the policy of Radoslav Sikorski."

As for Kopach, on October 1, it announced a “pragmatic policy” regarding events in Ukraine, stressing the importance of cooperation with the EU and NATO and abandoning the strategy of “loners”.

“We will be safe if we rely on the appropriate alliances, rather than swinging the sword ourselves,” she said in an interview with Gazeta Wyborcza.

It turns out that Poland is ready to support Ukraine in the framework of broader Western efforts, but refuses to play a leading role in shaping the international response.

Well, what about Pan Sikorsky?

It would be a mistake to assume that Sikorski retreated from the front line of Polish politics, Chapman believes. As speaker of parliament, he will be the second state official of Poland. If the president suddenly becomes incapacitated, then the speaker becomes and. about. the president.

People’s love for the brawler and restaurant drinker Sikorsky also failed. He retained popularity: according to a recent survey, 49% of respondents said they trust him.

What can you say?

Firstly, it is clear that political careerist Sikorski will retain both ties and influence, and in the future may come to the presidency of Poland. So it will be, most likely. And the people will vote for the one who told the whole world about the reverent Polish attitude towards America.

Secondly, the words Schetyn allow us to assume that there will be no particular changes in Polish foreign policy. As Uncle Sam says, so Poland will do.

Thirdly, no matter what Eva Kopach says, it is clear to everyone: any politician who occupies a higher position starts repeating about love for the people, priorities of domestic policy, etc. No need to judge by words; need to judge by deeds.

And things will be in Washington.