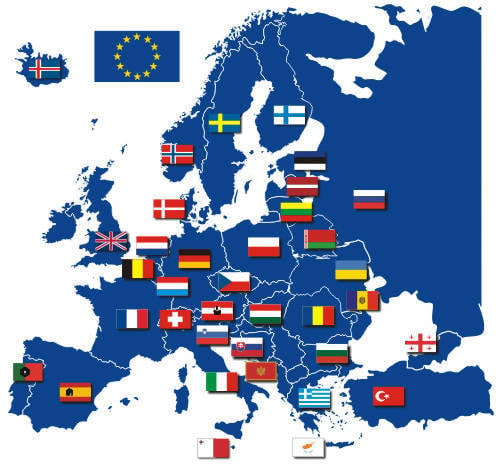 Germany and Russia, these two states separate, like a chasm, historical facts, the First and Second World Wars can not be erased from memory, but today we can say that Berlin and Moscow extended each other a hand of friendship and, according to Western analysts, this friendship has a chance of life. This week, Russian President Dmitry Medvedev met with German Chancellor Angela Merkel, and this is another confirmation that these two states can soon create a new tandem in Europe, which will eclipse all existing alliances and alliances with its economic power. One of the first states that realized this was France, whose government has recently demonstrated its good attitude to the Russian side, as evidenced by the sale of two Mistral class ships.


The field for cooperation between Germany and Russia is really great. In particular, today, when Russia is rich in natural resources, it is considering options for allocating free money. And there is a powerful resource center - Germany, which is looking for investors who are seduced by its goal of total domination in Europe. Stunning partnership perspective!

Trying not to miss your chance and France. Approved by her government, the sale of Mistral-class ships, according to Stratfor, is “the most significant transfer of advanced Western military technology to Russia since the end of the terrible Second World War.”

This is only a small part of the new European alliance, which may well become revolutionary in modern geopolitics. Paris joins Berlin in its separation from the influence of US foreign policy and instead is heading towards the eternal ideological enemy - Russia.

Western Europe realized that Russia controls a significant part of its gas supplies, back in the 2006 year. Recall, then, in the middle of a cold winter, Moscow cut off gas to neighboring Ukraine in an attempt to make the necessary concessions from it with a similar “baseball bat”. Soon the whole of Europe felt this “gas” blow.

In order to avoid this in the future, Europe quickly began to look for ways to get rid of the habit of "unstable" Russian gas. The enthusiasm for the Nabucco project, which envisages the laying of a gas pipe through Turkey, which will supply natural gas directly from the Caucasus, bypassing Russia, has increased.

But this plan will not be implemented, and this is a fact. Cause? Germany. Instead of finding ways to overcome Russia, Berlin decided, on the contrary, to join it. Now Germany is turning into a huge gas hub from Russia, and at the same time receives a part of Russian power. Despite objections from literally all other countries located on the shores of the Baltic, Germany and Russia completed the construction of a new underwater 5 miles pipeline in May of this year on 760. According to the developed schedule, it should be launched this fall, and the second additional parallel pipe will be completed later.

Across Western Europe, states refuse dangerous nuclear energy. These states will almost certainly be forced to look for a replacement for their own atomic energy, and it will be replaced by natural gas, possibly in the short term. First of all, it is easily accessible and pollutes the atmosphere much less than the same coal or oil. The International Energy Agency (MAE) recently predicted the approach of the “golden age of gas”. As a result, it means more influence and power for Russia and Germany.

France also hopes to fully participate in the processes. 20 July Russia gave the green light to the French energy giant, Total, by allowing it to join the most important Russian gas project - the development of the Yamal. This Russian peninsula is the focus of the greatest natural gas reserves in the world, and Russia will have to develop this area if it wants to continue to dominate the Western European market for natural gas supplies.

But with the development of the Yamal Peninsula is associated with a large number of problems. It is located north of the Arctic Circle and turns into a continuous swamp in summer, for this reason, drilling is possible only in dark winter. Total has vast technical expertise that is essential for the successful implementation of the project.

Given the desire of Germany and France to be friends with Russia, this will undoubtedly cause a negative reaction in the United States. And it is necessary to recognize that the reasons for Americans to worry about their influence on the states of Western Europe really are. Perhaps this was the reason for the statements of some American congressmen about the revision of the program “reset” relations with Russia. As you know, several days ago, open accusations were heard from the White House against the Russian government in destroying democracy in the country, and some Russians were banned from entering the US, accused of involvement in the death of lawyer Sergei Magnitsky.