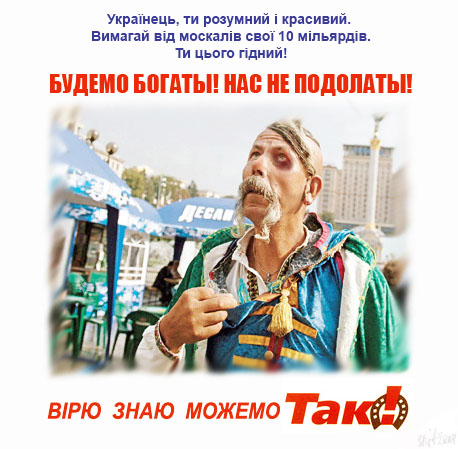 Probably, each of us asked ourselves questions "For what?" and why?" What did Russia do bad, for which svidomye Ukrainians hate her so much? And the question must be set differently. "What did GOOD Russia do that the demons curse so?" Yulia Romanova, a Russian woman, clever and just a good person, gave a clear and understandable answer to this question. I think that her thoughts coincide with the opinion of millions of Russians, I share them with you.

1. Russia created the state of Ukraine, putting it together in pieces, like a puzzle. Gave her land, open spaces, formed and strengthened.
2. Russia has always honored and respected Ukraine, called it the breadbasket, health resort, mother.
3. Russia equipped Ukraine. She invested in her heart and soul, not to mention money. Russia, on the other hand, rebuilt the Ukrainian cities after the now-beloved Hitler, the “liberator,” who did not leave a stone from the “Nenka”.
4. When Ukraine wanted independence, Russia assumed all of its debts. And continued to contain Ukraine.
5. When Ukrainian citizens had nowhere to work, Russia took them home, giving them jobs and wages of their citizens.
6. When Ukraine Maidan, Russia urged to come to their senses. And she continued to support and feed all this gang-watering thankless. But they were not enough. The greedy pack did not stop everything and everything was crying. And Russia gave more and more - how to break through the insatiable.
7. Now, when Ukraine was selling Christ and began to crush its own children with shouts: “Moskalyaku are on the way!”, Russia receives their refugees, treats them to the military, feeds their people, cleans up everything they have nakosyachili. And the end and the edge of this is not visible! And the greedy pack of hyenas and jackals just pobrehivaet: "Strip! Sala! Money! Give! Give! Yes for free! Bastards! Bastards! Few gave! Little! Give it all!"

Someone wise said: "Self-sacrifice should be prohibited by law - it corrupts those for whom they sacrifice." Ukraine is corrupted by the self-sacrifice and grace of Russia. They failed to save ANYTHING from the Russian heritage. All the pros ... Ali! EVERYTHING to a penny, to a penny. Whole generations of demons with black souls have grown up, who hunt the benefactor and all strive to get into his pocket, saw the tree on which they sit (not bitches, no - they have long been sawed), gnawing their hands and wiping their feet on charity. That's it, these demons and curse us. It is these hyenas and jackals who flock tirelessly for 30 silver coins in our forums. After all, they don’t have theirs - as, by the way, everything else.

An old Russian proverb says: "Do not do good, you will not receive evil."

Judging by how much malice and hatred Ukraine is pouring on Russia now, we have done good to TOO much! Ukraine is infinitely corrupted by our generosity and our mercy.