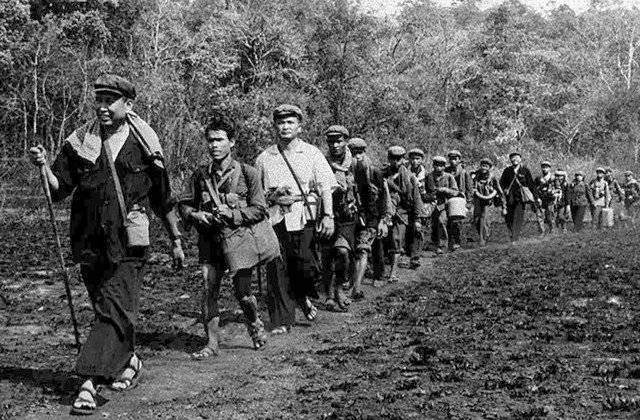 Vietnamese and Cambodian communists won at the same time - in the spring of 1975. Vietnamese communists eliminated the pro-American regime of South Vietnam, Cambodian - overthrown General Lon Nol. Both for those and for others the main opponent was “American imperialism”. However, after the flight of Americans from Vietnam, this enemy was somewhat virtual. Therefore, no communist solidarity did not work. Cambodian communists were oriented toward Peking, Vietnamese oriented toward Moscow. As you know, by this time the USSR and China from the "brothers forever" turned into open enemies. The same happened immediately with Vietnam and Cambodia.

The Cambodian Communists ("Khmer Rouge") under the leadership of Pol Pot began, in fact, the genocide of their own people (during three and a half years of their rule, three out of eight million people were killed in the country) and at the same time raids on Vietnamese territory. Moreover, from Cambodian airfields, raids on Vietnam were made by Chinese H-5 bombers (a copy of Soviet Il-28). In October, three Cambodian divisions invaded 1977 kilometers into the interior of Vietnam 10-th, only in January 1978-th managed to knock them back. In March, 1978 th story repeated. Hanoi is sick of it. In addition, more and more Cambodian refugees gradually gathered on the territory of Vietnam. Of these, the Vietnamese formed the Popular Front for the Liberation of Kampuchea (as it was then called Cambodia) of 18 thousand people. This Front launched the December 27 1978 invasion of Cambodia in order to overthrow the Pol Pot regime. Of course, alone he would not have had the slightest chance of success, but with him the parts of the Vietnamese armed forces with a total of 200 thousand people crossed the border. Three days later, the Vietnamese marines landed in the Cambodian port of Kampot, thereby cutting off half the servants from possible supplies weapons from China.

As early as January 7, 1979, Vietnamese Tanks entered Phnom Penh, on the same day, the Marines captured the only Cambodian Air Force base with all the aircraft there. Soon, only the northwest “corner” of the country remained under the control of the Polpot troops. At this moment, the "elder brother", that is, Beijing, decided to come to their aid. On February 17, seven PLA army corps totaling from 300 to 600 thousand people with one thousand tanks and 1,5 thousand guns launched an invasion of Vietnam along the entire 1460-kilometer border.

Vietnam was in an extremely difficult situation, since almost all of its best compounds were located in Cambodia. There were about 120 thousands of people against China, mainly border guards, agricultural and construction divisions and only one regular infantry division. Then, up to 80, thousands of militiamen were added to them, which did not cancel the overwhelming numerical superiority of the Chinese.

By the end of the second day, the Chinese troops advanced 15 – 20 km deep into Vietnamese territory and in February 19 took the city of Lao Cai. Then the offensive slowed sharply due to the fierce resistance of the Vietnamese. The level of combat training of the Chinese troops was very low, and at all levels, from privates to high command, they simply crushed the masses, completely ignoring the losses. The equipment was old and primitive, the interaction between the branches of the military and the units was practically absent. 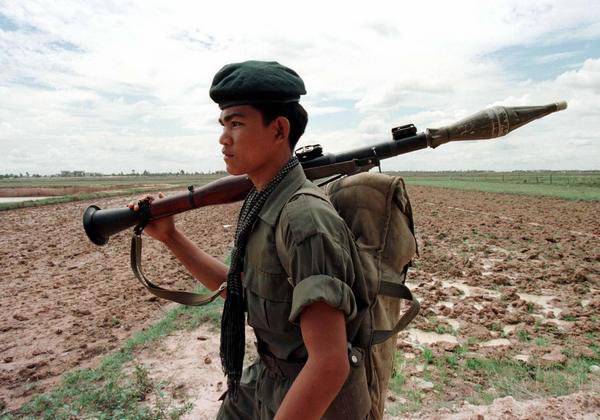 A Cambodian soldier on patrol on the outskirts of Phnom Penh 24 June 1997. Photo: Reuters

The USSR, connected with Vietnam by the treaty of mutual assistance, was to start a war against China. Moscow did not go for it, limiting itself only to urgent deliveries of weapons to Vietnam (first of all, the MLRS BM-21, very effective, as Damansky showed, against the crowds of Chinese infantry). In addition, Soviet military transport planes, carrying weapons for the new armed forces of Cambodia, began to fly Vietnamese troops back to the north, on the Chinese front. However, the Far Eastern and Trans-Baikal VO USSR Armed Forces began demonstrative exercises near the Chinese border.

2 March The Chinese took Caobang, 4 March - Lang Son, which opened a direct route to Hanoi (the kilometer remained 141 to the capital). The defense of the Vietnamese wore a focal-partisan character, part of their troops fought already in the rear of the Chinese, who in some areas advanced 30 – 50 kilometers and captured 20 settlements. Vietnam at this point has redeployed one army corps from Cambodia. After the fall of Langshun, general mobilization was announced in the country. Immediately after this, China announced the start of an “organized and planned” withdrawal of troops from the territory of Vietnam, which ended on March 18.

Both sides declared themselves winners. From the Vietnamese side, this was completely understandable; Beijing, on the other hand, stated that it wanted only to “teach a lesson” to Vietnam. The casualties of the parties killed by the parties amounted to approximately thousands of people in 20, which was, given the circumstances described above, obviously in favor of the Vietnamese. In relation to the civilian population of the country, which a decade ago was called "fraternal", the Chinese troops demonstrated absolutely Hitler's cruelty (after that in Vietnam the word "Chinese" became the most cruel insult). At the same time, the extremely low level of combat training of the PLA convinced the Chinese leadership that not only the economy but also the country's army needed radical reforms.

China failed to save the Polpotov allies (it’s already absurd to talk about China’s victory), by mid-March the Vietnamese troops, having lost about 8 thousands of people killed and one attack aircraft A-37 (American production from the former Air Force of South Vietnam), established control over the entire the territory of Cambodia.

After that, the Khmer Rouge moved on to the usual partisan struggle. Now their main ally has become a former adversary - Thailand, for whom the presence of Vietnamese troops on its border was completely unacceptable. He not only allowed the Khmer Rouge to fight from his territory, but he himself began an undeclared war against Vietnam. The first battles between the Thai and Vietnamese forces took place in June 1980, after which they took on a systematic character. Despite the very difficult natural and climatic conditions (jungle and mountains), they were carried out using armored vehicles and aviation (although on a fairly limited scale). At the same time, the very fact of the war by both sides was carefully concealed, therefore, very little is known about it.

By January, the 1985 Vietnamese troops established more or less tight control over the entire border between Cambodia and Thailand. After that, in May, Thai troops began a direct invasion of Cambodia with significant forces of their marines, which, however, the Vietnamese soon repulsed. The losses of the Thai Air Force in Cambodia by this time amounted to three attack aircraft A-37 and two reconnaissance aircraft O-1 (all of them were shot down by Vietnamese ground defense). 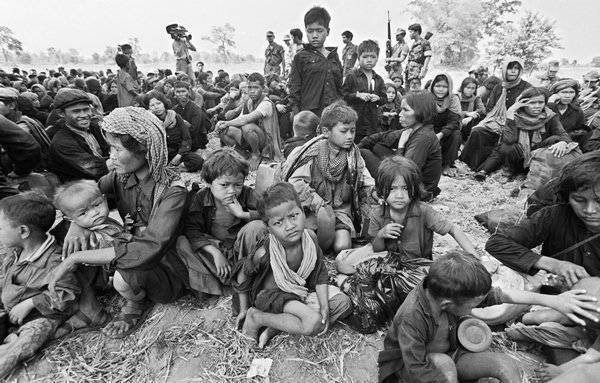 In December, 1987 - February 1988 in the region another war broke out - between Thailand and Laos over the disputed islands on the Mekong border river. Despite significant superiority in forces, Thailand lost, losing more than a thousand people killed, the F-5E fighter and the OV-10C attack aircraft. However, apparently, the Thais did not win the Lao, but again the Vietnamese, who largely controlled Laos.

By the end of 80, the Cambodian campaign began to tire Hanoi, primarily for economic reasons. The situation was aggravated by the change in the policy of the USSR and its economic degradation that had begun. Therefore, the Vietnamese began to curtail their presence in Cambodia and completed it in 1989. According to various sources, the losses amounted to thousands of people, half people and Thais - at least not less than 15 to 50. Although many regarded the departure of the Vietnamese as a defeat, this interpretation is incorrect. Vietnam fulfilled its main task - overthrew the Khmer Rouge, which was in its interests and in the interests of the people of Cambodia. In addition, from a military point of view, Vietnam has established itself as a regional superpower.

In 1991, under UN pressure, Sihanouk returned to Cambodia and became its king. After that, the wild situation with the representation of Cambodia in the UN stopped. Up to this point it was represented by the Polopot people. As mentioned above, they have destroyed almost 40% of the population of their own country, which even the most brutal dictators couldn’t dream of. And this genocide took place under communist slogans. However, the West did not worry about this at all. After all, Polpotov were allies of communist China, which from the middle of the 70-s to the events on Tiananmen Square was considered the unofficial "16-m member of NATO." And the Vietnamese, the winners of the United States and the allies of the USSR, overthrew the Poligots. Therefore, the Kampuchean communist thugs were "victims of Vietnamese aggression" and continued to represent themselves to the UN for 13 years. It is difficult to find a more vivid example of the hypocrisy of the West and the demonstration that it fought not so much with communism as with the USSR.

At the end of 1991, the half-patrons broke the truce and resumed fighting. After that, the 28-thousandth UN contingent was introduced into the country, from which, however, like all other UN contingents, there was not the slightest sense. Therefore, to fight with Polpotovtsy now had a weak Cambodian army. It was saved from a catastrophe only by the fact that half of the Pope was very seriously weakened during the years of war with the Vietnamese. In addition, Beijing refused them.

In the spring of 1994, the battle for Pailin in western Cambodia, which was considered the capital of the Khmer Rouge, was launched. He passed from hand to hand several times and, finally, remained for Polpotovtsy.

In April 1998, the aged Pol Pot finally died. After that, his army instantly collapsed, in May, government troops completely controlled the country. So ended this almost a quarter-century cruel communist war.