October 7 2014
24
American intelligence strategic drone MQ-4C Triton arrives at marine airbase aviation USA Patuxent River in Maryland. The drone spent 11 hours in the sky and covered a distance of 6 thousand kilometers by flying from Palmdale air base in California. The flight took place at an altitude of about 15 thousand meters. The path was significantly increased by the requirements of the Federal Civil Aviation Agency, which ordered an unmanned vehicle to fly along the southern border of the country, and not directly from coast to coast. For an unmanned aerial vehicle, which some have nicknamed the "silver carp" for its characteristic appearance, a new stage of testing begins, which will include about 2 thousand flight hours and should end with the achievement of initial combat readiness in 2017.

UAV MQ-4C Triton - a "sea" modification drone RQ-4 Global Hawk, which is focused on the use of the world's oceans. Changes in the design of the device are minor, but there are. Among other things have changed lightning protection system deicing reinforced fuselage and wing. This drone is fully autonomous, that is, it can be controlled by a program that was set by the device operator. If necessary, the task of "Triton" can be changed, taking into account changes in the situation.

Wingspan under 40 meters allows the machine MQ-4C Triton be in the sky to 30 hours, rising to a height of more than 18 thousand meters and accelerating momentum up to 310 components. From such a height for reconnaissance drone offers a great view. Mounted thereon radar field of view 360 ° is able to simultaneously observe the thousands of square miles of water surface. UAV is equipped with a system of identification of vessels on the signals coming from the set on their radar transponders. In addition, due to the presence of on-board cameras, UAV MQ-4C Triton operators are able to transmit high-definition picture both in visible and IR ranges. 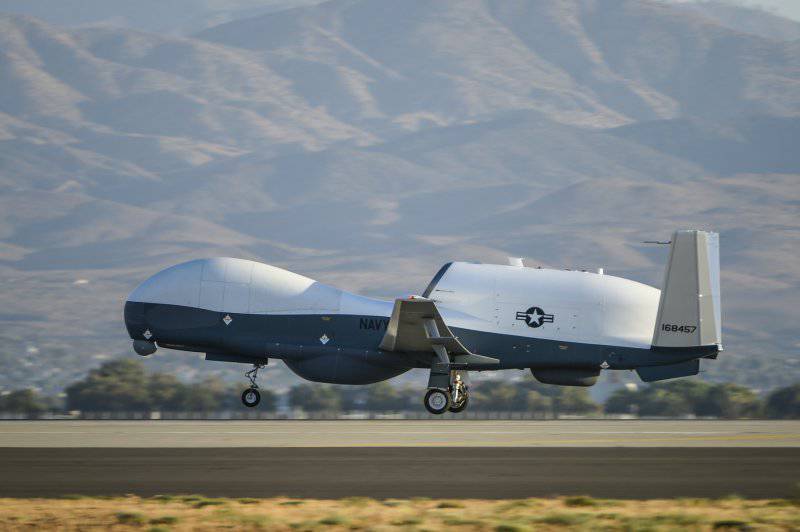 This drone is created by experts of corporation Northrop Grumman, «Triton» is based on a strategic reconnaissance UAV RQ-4 Global Hawk, which is in service with the US Air Force with 1998 years. Marine version of the UAV is designed for reconnaissance, surveillance of marine areas and reconnaissance in the interests of the United States Navy. The drone is equipped with a Rolls-Royce AE 3007 engine. Wingspan device is 39,9 meters, length - 14,5 meters, height - 4,5 meters and weight of the device is up to 14 630 kg.

UAV is equipped with multifunctional radar system, by means of which in one reconnaissance mission, he is able to cover an area of ​​7 million square kilometers. The reconnaissance equipment installed on board was created taking into account the requirements of the Navy. It includes in its composition a multifunctional radar with active phased AN / ZPY-3, electro-optical / infrared sensors, camera, radio intelligence means, a data relay system and an automatic identification (AIS) system. Installed on board the UAV equipment allows it to detect and automatically classify different types of surface targets.

Strategic reconnaissance drones RQ-4 Global Hawk in service with the US Air Force, all they were delivered 42 unit of this model. At the same time, this drone is a very expensive acquisition. The cost of each of the RQ-4 based on R & D costs are 222,7 million (131,4 million for serial UAV). The total funding for the program to create them to 2014 years inclusive cost the US budget in 10 billion dollars. 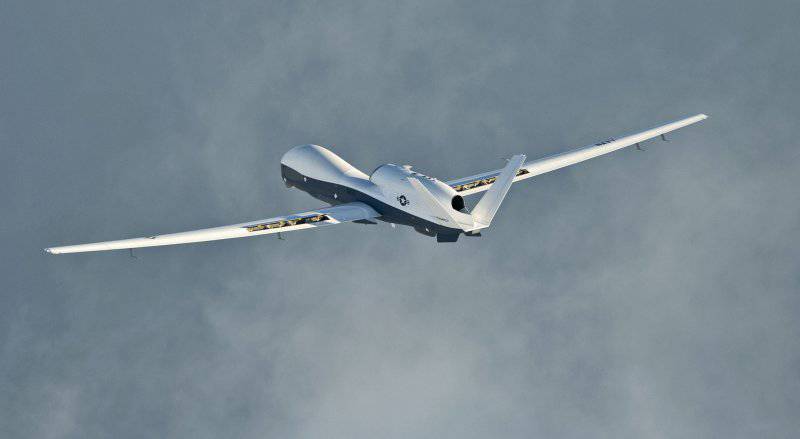 The design of the machine is very widely used modern stealth-technology, which makes it hardly noticeable to the radar, which, coupled with a large vehicle flight altitude makes it a low vulnerability to enemy weapons. Currently drone RQ-4 Global Hawk already owns a number of world records set in the class of unmanned aerial vehicles. So, launched in March 21 2001, the UAV RQ-4 30 spent hours in the sky 24 1 minute and second. On the same device, we managed to set a record for the flight altitude - 19 928 meters. Both achievements were successfully registered with the FAI - International Aviation Federation.

US Department of Defense signed a contract to develop a long-range maritime drones under the designation MQ-4C Triton 22 2008 April year. The amount of work under the contract amounted to 1,16 billion dollars. The contract provides for the construction of two fully equipped prototypes of demonstrators (already built and flying).

In terms of size, design and appearance, Triton is almost no different from its progenitor Global Hawk. A number of changes touched the bottom and the forward fuselage, where it was established powerful electronic equipment serving for the detection of sea targets. The bow of the UAV MQ-4C set optoelectronic camera with high resolution, which sees good surface targets and passes them to the picture online at the machine's control center. Also under its belly is a modern AESA AN / ZPY-3, has a greater range of water surface survey. 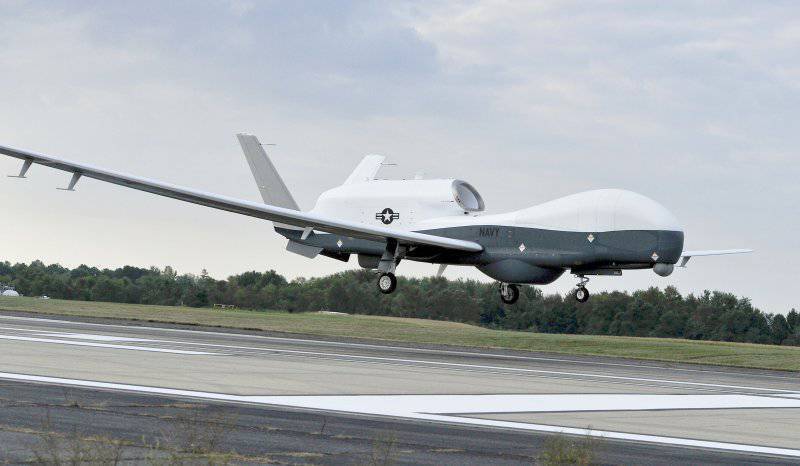 On board the drone has a modern computer, which stores in its memory the video and electronic images as modern warships and vessels naval and civilian fleets. With this solution, the end user in the control room receives from the drone is already fully "conscious" information about the situation that is emerging in a particular area of ​​the world ocean. In accordance with the concept of network-centric implemented today received information drone can take full advantage of the operational headquarters and a wide variety of levels, as well as the crews of ships and aircraft. To transmit intelligence "Triton" has developed means of communication, device positioning vessels and detectors detecting radar signals. Also on these drones, most likely in self-defense, will be installed modern means of electronic countermeasures.

New reconnaissance drones fleet Designed to replace reconnaissance aircraft in service. James Hook, Program Manager for the Enhanced Marine Intelligence System (BAMS), notes that the MQ-4C UAV will allow monitoring of ocean surfaces with greater efficiency and duration. It is assumed that the new drones will be paired with modern P-8A Poseidon patrol aircraft, which are beginning to enter the arsenal of the Navy, replacing the P-3 Orion predecessor aircraft. Also, the drone will be able to work in tandem with deck-based E-2D Advanced Hawkeye early warning and guidance aircraft. Options for their possible interaction can be very diverse. For example, the Tritons will be able to find a submarine on alert, the relevant information will be transferred on board P-8A Poseidon aircraft that carry onboard equipment for tracking submarines in the underwater position (the aircraft are equipped with sonar buoys, as well as a magnetometer) and able to accompany the submarine, and if necessary, destroy it. 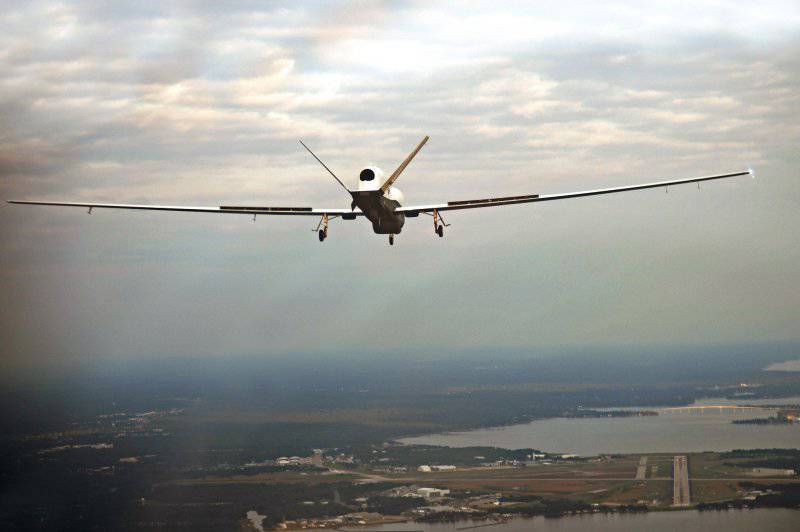 In total, as part of the program BAMS (Broad Area Maritime Surveillance) provides for the purchase 68 drone MQ-4C Triton (+ 2 vehicle demonstrator) to be operated by the fleet, together with the new generation of aircraft based patrol aircraft P-8A Poseidon (planned to purchase 117 aircraft ). According to the calculations of American admirals, the introduction of this tandem will replace actively exploited in the current fleet of obsolete aircraft P-3C Orion in the number 225 units.

It is reported that the new drones will be deployed on the islands of Guam and Hawaii in the Pacific Ocean and the island of Diego Garcia in the Indian Ocean. In addition, they will be based at air bases Jacksonville, Florida, Point Mugu in California and Sigonella in Italy. The program of active testing of aircraft data is currently ongoing. At the same time, foreign countries are also showing interest in UAVs. Australia and India have expressed interest in acquiring them.