A Donetsk-based German young came out into the steppe ... 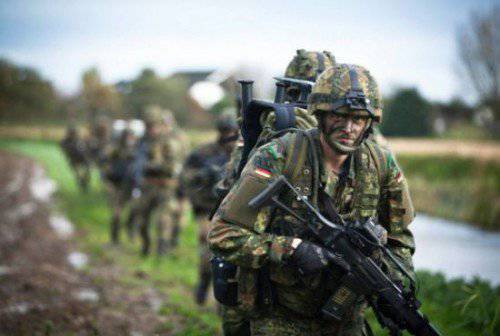 German airborne troops from Seedorf base in the federal state of Lower Saxony (Germany) will help the Organization for Security and Cooperation in Europe (OSCE) to monitor the cease-fire in eastern Ukraine. This October 3 reported the German newspaper Bild. A representative of the Ministry of Defense of Germany confirmed this message.

The publication, referring to the relevant documents of the Ministry of Defense of Germany, reports that 200 German soldiers are planned to be involved in the mission in Ukraine. 150 of them will control the situation in the crisis area with the help of unmanned aerial vehicles. Another 50 military will guard the OSCE monitors.

The planned operation of the Bundeswehr in Ukraine is a consequence of the German-French fact-finding mission carried out in the east of Ukraine in the middle of September. The agreement on such cooperation between France and Germany was reached by French President Francois Hollande and German Chancellor Angela Merkel on the sidelines of the NATO summit in Wales.

During the mission, experts from both sides came to the conclusion that the truce between the Kiev troops and the defenders of the DPR and the LPR can be monitored with the help of drones if the personnel needed for this will be guarded by armed soldiers.

The decision on how exactly the cease-fire regime will be controlled in Ukraine will be made by the OSCE. “A joint report by Germany and France on how we can help the OSCE in its important peace mission will be submitted to the organization these days,” said German Defense Minister Ursula von der Leyen. Only after this, according to her, will the specific details of the forthcoming mission in Ukraine be specified. “Our common goal is to ensure that the situation in the east of Ukraine stabilizes and develops into a peace process,” summed up the head of the German defense department.

If this organization decides to use German UAVs in the mission, the German paratroopers will be ready to perform the task assigned to them. They will accompany the uniformed mission with the OSCE stripes, but with weapons. The German Defense Ministry believes that the participation of armed soldiers of the Bundeswehr in the mission in Ukraine will require the consent of the Bundestag.

In the footsteps of von Reichenau's 6 Army

The appearance of German paratroopers, and even in such a complex region (and questions could arise even in Lviv, not to mention the Southeast) can only agitate the minds of the people of the DPR and LPR. Already painfully strong here historical memory. The paratroopers had not yet arrived, and local publications were already reprinting the infamous order of the commander of the 6th Wehrmacht Army Field Marshal Walter von Reichenau of October 10, 1941 on the behavior of military units in the East.

This order, as is well known, demanded "strict but fair punishment for the Jewish scum of humanity" and the destruction of all partisans and underground fighters, regardless of civilian casualties. By the way, the attack of the 6 Army took place just in those places, where now the paratroopers will have to pass further service. In short, the reasons for unhealthy analogies and associations - more than enough.

Especially worried about the fact that the service of the German paratroopers in the Donbass can be delayed for a long time. First, the terms of their stay in a foreign land for them are not stipulated. Secondly, the conflict itself tends to “freeze”. In other words, a situation similar to Transnistria or Nagorno-Karabakh may repeat. In this case, the Germans will have to stay here for many years. Consequently, unpleasant moments cannot be avoided, since in the eyes of the local population they will always remain “strangers”, if not at all “occupiers.”

Meanwhile, October 3 President of Belarus Alexander Lukashenko in an interview with Euronews expressed his willingness to send Belarusian peacekeepers to the Donbass to separate the warring parties. “If necessary - and this is a very dangerous and terrible thing for me - since there is Russia's distrust of the West and the West of Russia, America of Russia and Russia of America and there is a distrust of the warring parties, then I would be ready to use my armed forces to in order to separate the conflicting parties, ”the Belarusian president said.

It can be seen, the presence of Belarusians in the Donbass would be the best option in the current situation. A common language and culture, and most importantly - mutual disposition to each other is exactly what is needed in such a difficult situation.

But in Kiev, they instantly replied that they would do it on their own. “We believe that no peacekeeping troops need to be brought into Ukraine. It is necessary for the Russian Federation to fulfill the “Minsk agreements” on a cease-fire and an exchange of hostages ... The Russian Federation must withdraw its troops from the territory of Ukraine. No peacekeeping troops in Ukraine are needed. We are able to bring order to our own land if foreign troops leave it, ”said Yevgeny Perebiynis, director of the information policy department at the Foreign Ministry, on the same day.

It turned out that the Ministry of Foreign Affairs of Ukraine deceived both the citizens of Ukraine and the world community. While eloquent statements were being made, an behind-the-scenes agreement had already been prepared on the arrival of German paratroopers in Ukraine.

As for the presence of the Russian military in Ukraine, no one is hiding. The Russian military does exist on the territory of Donbass, however there are not many of them, they ensure the observance of a truce. This was stated by the permanent representative of the Russian Federation to the OSCE, Andrei Kelin. According to him, at the invitation of the General Staff of the Armed Forces of Ukraine, about 80 Russian military arrived in Ukraine. Their task is to ensure compliance with the truce, as well as work on the map, which will create a line of demarcation between the warring armies.

Kelin also noted that work on the creation of a buffer zone, when heavy weapons will be relegated to 15 − 30 km, will begin as soon as the situation calms down. He, in particular, noted that fighting is still underway in the “security zone”, and one of the hottest spots is Donetsk Airport.

Meanwhile, the German paratroopers are much more necessary at home, in Germany, than in the Donetsk steppe far from Lower Saxony. And that's why. The Minister of the Interior of Germany, Thomas de Maiziere, recently speaking in parliament, spoke of the danger posed by local Islamists. And the Bundestag, in turn, appealed to the Federal Office for the Protection of the Constitution with a request to provide data on citizens of the Federal Republic of Germany who are in a combat zone in Iraq and in Syria.

It turned out that about a hundred Islamist volunteers have already returned to Germany, about 500 people still remain in the combat zone, but can come home, that is, to Germany, from day to day. In addition, more than six hundred "sympathetic" so-called. The Islamic state, but not yet leaving the territory of Germany, is being monitored.

On the danger of the participation of a large number of German volunteers in the fighting in Syria and Iraq, major German publications warned at the beginning of 2014. In particular, the newspaper Bild in February published a review of jihadists from the Federal Republic of Germany. The editorial board urged the government to "pay attention to the particular threat posed by returnees with combat experience."

Der Spiegel magazine has published a detailed report on the German camp in Syria, where military training of German-speaking militants is being conducted. Many land publications were in favor of allocating additional funds and personnel to law enforcement agencies in order to prevent the German radicals from entering the conflict zone at an early stage.

But due to the situation in Ukraine, the attention of the German political elite and controlled media over the past six months was mainly aimed at shaping the image of "Russia-invader" and "Putin-dictator." As a result, if Islamist acts of terrorism begin in Germany, the German paratroopers will not be where they are needed most.

Of course, the presence of the German military in the Donbas can not affect the Russian-Ukrainian and Russian-German relations, and not for the better. Washington will win, again raking in the heat of someone else's hands. After all, the more strife and conflict in Europe, the easier it is to keep it under control. As for the Kiev authorities, there is not much to talk about them. Shamelessly trading in Ukraine wholesale and retail, they have long proved their anti-national essence.