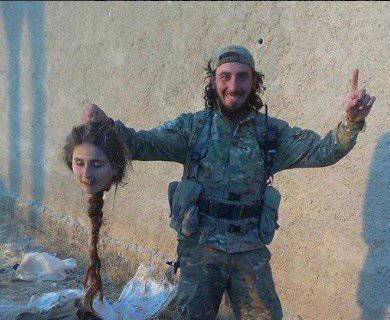 Syria celebrates the Muslim holiday of Eid al-Adha (Kurban Bayram). Notes, as usual in recent years, under the roar of shells. October 4, on the day of the beginning of the holiday, terrorists bombarded the Al-Sheikh Park in the town of Idleb, where folk festivals were held. One of the mortar shells exploded right on the playground. Four children and two adults died.

October 5 in Damascus in the quarter Barze because of a similar crime girl was injured. And in the city of Dzharamana of the province of Damascus, two residential quarters were fired by “opposition” militants - one person was injured and caused great material damage to nearby houses and a school.

And the militants of the "Islamic State" struck the world community with another brutal video, very similar to those
three that were demonstrated earlier. Again the hostage is in an orange robe, an action movie dressed in black behind him ... Again, execution through decapitation against the background of the same sandy desert landscape.

At this time, the victim of the murder was 47-year-old Briton from Manchester Alan Henning. In Syria, he was a volunteer, carrying humanitarian aid. In December, 2013 was kidnapped by “oppositionists”. Before his execution, Henning said that he was paying with his life for the decision of Britain to participate in the American military operation in Syria.

In this way, the "Syrian opposition" thanks its financiers, its support, its actual "parents."
British Prime Minister David Cameron, as usual, strongly condemned the execution, writing on his twitter: "The brutal murder of Alan Henning IG shows what these terrorists are wild and disgusting." However, this statement looks more than cynical and hypocritical, taking into account the fact that Syria, Russia, Iran constantly warned the West that the “Syrian rebels” supported by it are savages and terrorists.

Now Henning, like other citizens of Western countries, paid with his head, in fact, not for the current military operation, but for all the previous actions of Britain and its senior partner - the United States. For destabilizing the situation in Syria and other Middle Eastern countries, for their desire to overthrow the disagreeable government at any price, for the cynical use of bloody terrorists for this dirty purpose.

The eerie photograph spread by militants of the Islamic State, which besieged the city of Ras al-Arab near the Syrian-Turkish border, was much less well known. The Kurds live in this city, they call it Cobane. Unfortunately, the Islamists have captured many settlements around it and continue to attempt to invade the city itself, defended by Kurdish self-defense units.

Terrorists act without sparing anyone. The photo shows a smiling, joyful, triumphant "Syrian oppositionist" holding a young Kurdish woman's head in her hands by the hair. (However, the big question is how much this “oppositionist” is really Syrian: there are many foreign mercenaries from more than 80 countries of the world in the ranks of terrorist groups).

It is not surprising that many Kurdish women in such conditions, on a par with men, fight for their city, for their land, for their families. They had to take in hand weapon, to survive and defend their children. They had to go to war so that they would not be treated the same way as this long-haired girl. One of the women - fighters of the Kurdish self-defense detachments - near the same city of Kobane blew herself up with a grenade along with several terrorists.

The militants of the "Islamic State" are trying to spread their bloody activities to neighboring Lebanon and Syria. On the night of October 6, a large group of Islamists attempted to invade this country. The Lebanese Hezbollah fighters managed to repel the attack. The 15 members of the Islamic State were exterminated, the rest were forced to flee. Lebanon is also included in the borders of the conditional “state” inscribed by the ideologists of ISIS, where Islamists want to build a “caliphate”.

As for the so-called anti-terrorist operation carried out aviation US and allies, then, like
it was expected that without cooperation with the Syrian leadership it would have extremely low efficiency. It was not possible to stop the progress of terrorists in the region of Ras al-Arab (Koban). If, of course, the real goal of air strikes is to combat IS, then little is gained from this. In addition to the additional damage done to Syria. “Aviation managed to destroy two tank, one vehicle and six firing points, ”are roughly the reports of these attacks. When the Americans really wanted the destruction of Yugoslavia, Iraq, Libya - then the consequences of the bombing were much more significant. And with the "Islamic State" - ceremonies, apparently, for some reason, Washington and its accomplices still need it.

Under the guise of the Turkish Erdogan regime is trying to further intensify its role in the Syrian war. And so the overwhelming majority of the members of the Islamic State, as well as the Dzhebhat An-Nusra, the Islamic Front, and the notorious Syrian Free Army, penetrated into Syria precisely from Turkey. Most of the weapons and money for terrorists come from the same place. So also Erdogan asked the parliament for permission to conduct a ground operation, allegedly against the "Islamic state". And got it.

Syria appealed to the UN Security Council with a request to respond to such aggressive aspirations of its dishonest neighbor from the North. “The Turkish government is trying to deceive the whole world. The purpose of this intrigue is to obtain approval for the alleged struggle against ISIS, and in fact, in order to wage war against Syria, ”said the Deputy Foreign Minister of the SAR, Faisal Al-Mekdad.

Erdogan’s arrogant intentions were condemned in Turkey itself, in particular, the largest opposition organization, the Republican People’s Party, categorically opposed them. Its leader Kemal Kilicdaroglu called the behavior of official Ankara a disgrace for the country.

And in Syria, life goes on, the celebration continues, in spite of everything. President Bashar Al-Assad participated in the festive prayer. Defense Minister Fahed Jassem Al-Freijj visited military units and wounded in one of the Damascus hospitals, and conveyed congratulations from the head of state to the military. The army continues counter-terrorist operations - in particular, Al-Dukhania was liberated in the province of Damascus.

And from the positive News: The UN Security Council unanimously condemned the double attack in Homs on October 1, which killed dozens of schoolchildren. Earlier, most of these crimes of the “Syrian opposition” were not condemned - either the United States, France, or Britain constantly blocked statements on this subject. Now even the politicians of these states can no longer so brazenly and openly support terrorists. Apparently, a gradual change in consciousness in the West is still taking place, although this process is by no means fast.