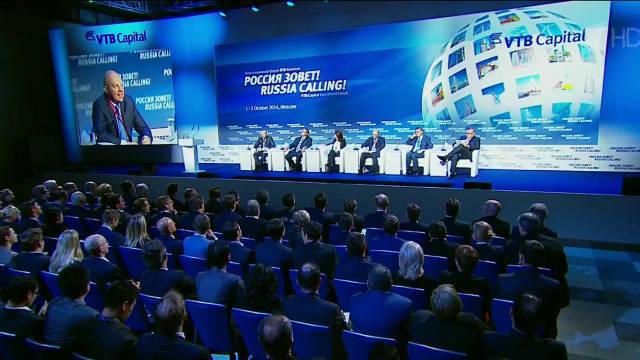 Dear readers! If you have not yet fastened your seat belts, then do it immediately - the Russian economy, without having left the zone of turbulence, is preparing for a decline. The best we can count on with the current liberal crew is a soft landing, but there are no guarantees. The bad news that the crew never landed a plane. While the pilots are experimenting with buttons and levers, we have time to talk about why this happened and how to proceed.

... I don’t know about yours, but my “Russia Calling” forum in St. Petersburg caused depressing feelings. As I understand it, not only I have one. This is despite the fact that his task was just the opposite - to advertise Russia as a country of great opportunities and brilliant prospects. The forum itself on the composition of the speakers and the theses voiced by them was not much different from previous ones, and indeed from all similar events - from the “Gaidar Forum” to the prime minister’s reports to the State Duma. This worries most of all - the world is changing, and the consciousness of the managers of our economy is not.

But the main problem, which was most clearly manifested in the forum, and in general in the actions and rhetoric of power in recent times, is the growing wave of contradictions. I will list some of them and warn you that it may hurt you when reading:

- Vladimir Putin, on the one hand, had previously set a complex task before the government, known as the “May Decrees,” but on the other hand, they were not binding. At first they were quietly sabotaged, and now with the draft budget submitted for 2015 – 17. actually merged into the scrap in terms of the growth rate of salaries of state employees;

- The elite, repeatedly warned about the insecurity of owning property abroad, is trying to push the law “on compensating Russians for losses incurred abroad at the expense of the budget,” the president is still silent;

- The government, which has been claiming that the root of all the ills of Russia in the lack of investment, which follows from the lack of predictability, is doing everything possible to destroy this predictability. It then fundamentally changes the tax legislation in the oil sector, it creates something incomprehensible with pension funds, it expels people from small businesses, it calls them back, it declares the need to impose a sales tax, then cancels the need, it declares the ridiculousness of sanctions, then (as in this forum) talks about the enormous damage from their actions, and so on.

This is not to mention simpler movements, such as having fun with the transition or cancellation of the transition to winter time, the proposal to return the alcohol to the stalls and the parallel proposal to sell alcohol-containing tinctures in pharmacies according to prescriptions (guess who the author is) and the like.

At the same time, the government outwardly continues to demonstrate adherence to liberal dogmas, but in fact it is not able to withstand any, even if liberal, course at all, shy away from side to side. It got to the point that at the Russia Calling Forum, Sberbank head German Gref almost directly points to the professional incompetence of his like-minded people from the government. Speaking about the reasons for the collapse of the USSR, he said: “There is one key reason that caused all the rest. This is a tremendous incompetence of the Soviet leadership. And first of all in the field of economics. They did not respect the laws of economic development. I will say even more: they did not know them. They were happy people, did not observe what they did not know. In the end, it caught up with them. It is very important for us to do our homework stories. We should not allow the same situation. ”

It is believed that all of the above - signs of great confusion. Knowledge and deep respect for the laws of economics, contrary to G. Gref, do not solve problems by themselves in the absence of competence. Why is that? Because this government was not intended to act in the current situation. He was destined to years of sluggish work in conditions of stable oil prices and Middle Eastern wars, blazing "somewhere far away." It knew how to work at the growth rate of GDP in 5%, but does not know how to keep the indicator from falling into a minus. It was ready to accept foreign investment, but does not know how to respond to sanctions. And so on. The government in the current ultra-liberal composition cannot understand and accept the challenge that fate has thrown to our country. All that it wants is to quickly play the situation back, get rid of sanctions and return to the usual mode of operation. And this is possible, but - only if we admit our defeat and voluntarily give up the given historical chance.

So maybe, well, it is the government? To dump an incompetent crew overboard of history and transfer the steering wheel to the strong professional hands of people who are not afraid of changes and chances. Easy, if only to know where to find them. So far, we do not even have applicants for the steering wheel, so that you can select the most sane among them. There is no competition for alternative development programs, there is no image of the future, there are no personnel capable of not only embodying this image, but even formulating it.

In this situation, it remains only to deeply sympathize with those who are forced to deal with "what is", taking the blows for the lack of talent of "what is" and taking back their promises in order to at least somehow align the path of decline.