The mess on the water: the results of the verification of the Prosecutor General's Office 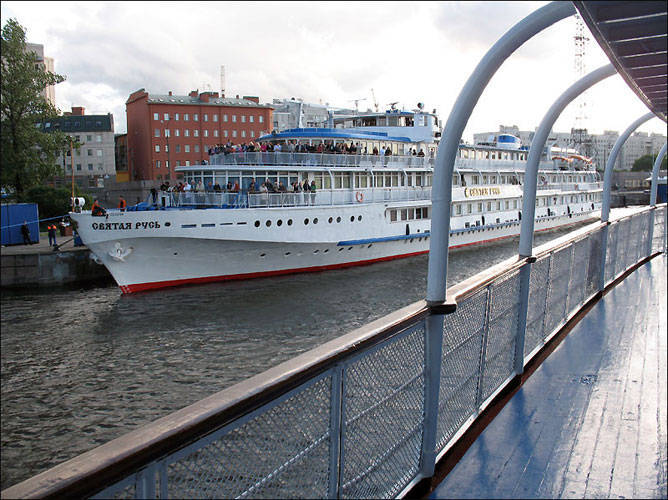 The Prosecutor General’s Office presented the results of inspections of Russian water transport to the President and the Prime Minister. It turned out that the safety of passengers shipowners are often neglected. Many violations, and the officials turn a blind eye to them.

A large-scale inspection began after the collapse of the ship "Bulgaria". Later her critical need was confirmed by the accident on the Moscow River.

There were revealed flagrant violations of the law, as well as weak control over its execution by the responsible authorities. Violations in the process of waterway passenger traffic occur very often - from the lack of the necessary documents to elementary malfunctions and negligent attitude to the rescue equipment.

The situation has already been reported to the President and the Prime Minister. The formulation used by the Prosecutor General’s Office is "the situation on inland waterways remains difficult."

For example, overload is not averse to almost all ships. And why, if accounting, too, has already moved to the non-binding status? And if you add on the age of the ships ...

The document with the results of the inspection is posted on the official website of the Prosecutor General’s Office. There is only one page. But what! Only a superficial study showed that the park is seriously outdated. More than half of all ships from those that carry passengers in Russia older than 30 years.

Discovered and engines that do not match the ship's documents, and very very "alien" equipment. For example, in St. Petersburg, Tatarstan, Chuvashia and the Nizhny Novgorod region, navigation instruments with illegal software were used when transporting passengers. Shipowners could not explain how it is.

In the Far East - the other история. According to the Prosecutor General’s Office, local carriers neglect rescue equipment. They revealed the fact of a threat to the lives of children during swimming. A ship sailed on a voyage carrying an 94 child from an orphanage. However, children's vests counted seven times less - only 13 pieces!

Water transport is almost completely rotten, industry experts admit. The fish is known to be rotting from the head. With regard to water transport, the head can be called controlling organizations. The prosecutor’s check revealed no proper state control. The river registry issues certificates of validity to courts that do not deserve it. If necessary, it may even illegally extend the validity of evidence. Or even transfer the annual re-examination "for later."

The questions were also caused by the activity of the territorial agencies of the Federal Agency for Environmental Control. She was also declared ineligible. All similar facts are being checked. The court found unfit. And previously issued "left" evidence canceled.

Since the 90s, new ships were not built in Russia. Figures that are somewhat at odds with current prosecution data were previously published by Forbes analysts. They are very curious. Almost 60% of the river fleet Russia - ships older than 40 years, such as "Bulgaria". A third - "middle peasants", they are about 30 years old. Less than 10% - 20 and 30 years. And only 2% are under 20 years from the date of production. Moreover, these are mainly small pleasure boats.

On most boats there is no air conditioning, for example. This was confirmed by a test on Amur. In addition, almost no overhaul. The legislation does not set its mandatory dates. And shipowners successfully use spaces.

According to the results of the inspection of the Prosecutor General’s Office, more than 800 people were brought to disciplinary and administrative responsibility. Six criminal cases have been initiated. The question of a few more. Several dozens of materials have been sent to the preliminary investigation bodies. These are mainly facts of abuse of authority, forgery of service and the provision of services that do not meet safety standards.

And in the case of the crash of "Bulgaria", which forced to take a closer look at the sea and river fleet, waiting for the emergence of new defendants. The investigation wants to bring to justice three officials of the State Mormonchrebnadzor.

Ctrl Enter
Noticed oshЫbku Highlight text and press. Ctrl + Enter
We are
ARMY-2016. "Neptune": on the water aki drought
1 comment
Information
Dear reader, to leave comments on the publication, you must to register.