Soviet Russia and the Entente in 1918 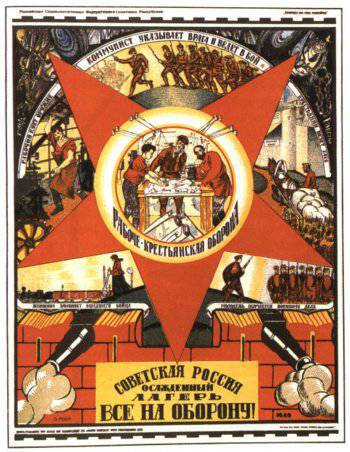 In November, the governments of the Entente [1917] and most other countries of the world, openly demonstrating hostility towards the Soviet state, refused to recognize the Soviet government. Official relations with diplomatic representatives in Russia ceased, but informal contacts took place. [1] In January, 2, the future people's commissar [1918] for foreign affairs, M.M. Litvinov was appointed Soviet plenipotentiary representative [3] in the UK. However, since all the European powers of that time (with the exception of Germany) did not recognize the Soviet government, he did not receive any official recognition. [4]

As early as December 10, Great Britain and France concluded an agreement on the areas of future operations of British and French troops in Russia. The zone of Great Britain includes the Caucasus, the Transcaspian region and the Cossack regions, the zone of France - Bessarabia, Ukraine and the Crimea. Siberia and the Far East were viewed by the Entente as areas of interest for Japan and the United States. The Entente was preparing an intervention in the southern and eastern parts of the country, providing not only the suppression of the revolution, but also the dismemberment and colonization of Russia. In fact, already then the economic blockade of the country began (see below). [6]

From the first day of its activity, the Soviet government sought to get Russia out of the First World War. December 9 The 1917 in Brest-Litovsk began peace negotiations with representatives of the Fourth Union. 10 February 1918. Allies presented an ultimatum to the RSFSR, which was rejected by the Soviet delegation headed by LD Trotsky. Negotiations were interrupted. 18 February Austro-German troops launched an offensive in the north, which later launched a general offensive in the entire belt from the Baltic to the Black Sea. In Transcaucasia, another 12 of February began the advance of the Turkish troops.

Without military forces to repel Germany, the RSFSR 3 March was forced to sign with Austria-Hungary, Bulgaria, Germany and Turkey the Brest Peace, which contained a number of political, economic, financial and legal conditions that became a heavy burden for the Soviet Republic. [7] “... The source of uncertainty about the new Soviet regime was its relationship with the outside world. Lenin instigated the seizure of power in the hope that this example would provoke the workers' revolution in other European countries, especially in Germany. As months passed, and this did not happen, it became clear that the Bolsheviks would have to fulfill their promise to stop the war not through negotiations with friendly socialist Germany, but through reaching an agreement with the old imperialist Germany. With the weakening of the Russian army, which the Bolsheviks themselves contributed to, it could only mean accepting absolutely all the conditions that the German generals would think to dictate ”[8].

Trying to involve Soviet Russia in the continuation of the war with Germany, the landing of the Entente under the pretext of protecting military warehouses from the German 6 troops in March took Murmansk. March 15 representatives of the Entente declared the non-recognition of the Brest peace and accelerated the preparation of military intervention. "... The conclusion of a separate peace between Germany and Soviet Russia 3 March 1918 pushed the Entente to direct military actions on Russian territory" [9].

After the conclusion of the Brest Peace Treaty, when it became clear that Germany would not overthrow the Soviet power, the Allied ambassadors headed by the US ambassador, who was the doyen [10], left Petrograd and moved to Vologda. The choice of a new location for diplomatic missions was not accidental, since the Entente was moving towards an active struggle against the Soviet state, and the first strike was planned from the north, through Murmansk and Arkhangelsk. “Since the beginning of the intervention pursued mainly anti-German goals. In order to prevent the mass offensive of the Germans, it was necessary to save the Eastern (Russian. - PG) front at any cost ... At the end of the summer of 1918, the nature of the intervention changed. The troops were instructed to support the anti-Bolshevik movements [11].

From October 1918, the international situation began to change rapidly. The leading states of the Fourth Union embraced a revolutionary crisis: there were revolutions in Austria-Hungary and Germany. In both countries, monarchies fell, in addition, Austria-Hungary fell apart into several nation-states. November 11, somewhat later than the other members of the Fourth Alliance, capitulated to Germany, which meant the end of the First World War.

Intervention could not play a decisive role in achieving victory over the Bolsheviks; therefore, having defeated Germany, the Entente decided to defeat Soviet Russia mainly with the forces of its own armies. [12] “The emerging white armies did enjoy some foreign support — they were helped by former allies of Russia, especially Britain and France. However, one should not exaggerate the effectiveness of this support. Perhaps the most significant contribution of the Allies was the supply of whites. weapons, ammunition and military equipment ... On the other hand, they never introduced enough people to play a decisive role in the outcome of the war; but by helping to the extent that they helped, the allies made whites vulnerable to accusations of lack of patriotism, that they encourage foreigners to interfere in the internal affairs of Russia. They also gave the Communists flawless grounds for confidence that, as Lenin had warned them, the imperialists were ready to crush the young Soviet state. The Allied intervention laid the foundation for many myths. ”[13].

Official representatives of Britain, the United States and France, abusing diplomatic immunity, conspired with counter-revolutionaries, assisting them in the fight against Soviet power. In this regard, 25 on April 1918. The Soviet government was forced to send a note to the governments of Great Britain, the United States and France demanding to “immediately withdraw their consuls from Vladivostok”, as they sought to unite the forces of counterrevolution and prepare for Siberia and the Far East to withdraw from Soviet Russia . The same activity of the diplomats of the imperialist powers was launched in Ukraine, the Caucasus, Central Asia and other regions of the country, inciting bourgeois nationalists.

From March 1918, in fact, and from 30 in May, 1918 was officially the People's Commissar for Foreign Affairs G.V. Chicherin [14], who replaced LD Trotsky. At the height of the Civil War and foreign intervention, the Chicherin took steps to organize Soviet overseas agencies. So, by 30 June 1918, issues of organization and functions of the NKID and foreign missions of the Soviet state were developed.

23 December 1918, a member of the NKID Collegium Litvinov, who was at that time in Stockholm with the authority of the Soviet government to enter into preliminary peace talks with representatives of the Entente, sent a note to the envoys of Great Britain, Italy, the USA, France and Japan in Sweden. This note contained an official proposal to establish peace with Soviet Russia. However, no answers followed. [16]

8 August 1918. The Soviet government was forced to formally end its diplomatic relations with the Entente countries. In response to this 10 in October 1919, an economic blockade of Soviet Russia was declared. [17]

An excerpt from the book of Pavel Gusterin "Soviet-British relations between the world wars." (Saarbrücken, 2014).