October 13 2014
2
After the Americans captured the main naval base (naval base) of Iraq, Umm-Qasr, in March 2003, 6 of Savari-7 type boats, converted into minelayers, were found there. 4 of them afloat and 2 flooded, but soon raised to the surface and used by the US Navy to trawling the fairways of the base. 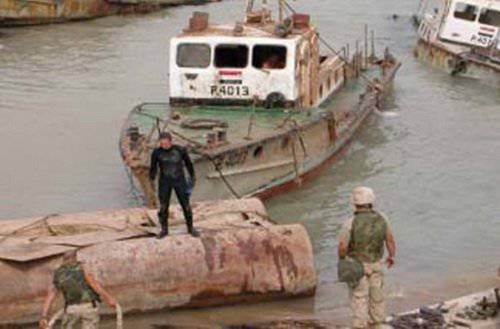 The Americans who started the construction of the new Iraqi army paid attention primarily to the ground forces, which could be thrown against the partisan movement in the country. However, in January 2004, the creation of Iraqi coastal defense forces was announced, initially consisting of 214 volunteers, who on October 1 of the same year began to patrol. By the time of the official re-creation of the Iraqi Navy in January 2005, there were only 5 patrol boats of the Nasir type (project Predator 81) built in Taiwan. Despite the fact that they were relatively new (all were built in 2000-2002) and had a modern look, they were almost open-air in the United Arab Emirates for almost 2, and during this time they became largely unusable. That is why already in February 2004, the first two boats PC-102 and PC-103 were delivered for repair to the dry dock in Jebel Ali. After repairing the 30 boat on April 2004, they made the transition from Manama (Bahrain) to the Iraqi port of Umm Qasr, thus becoming the first combat boats of the revived Iraqi Navy. By January, 2005, the rest of the 3 boats arrived in Iraq: w / o PC-101, PC-104 and PC-105, the amount of repair work on which was somewhat smaller. 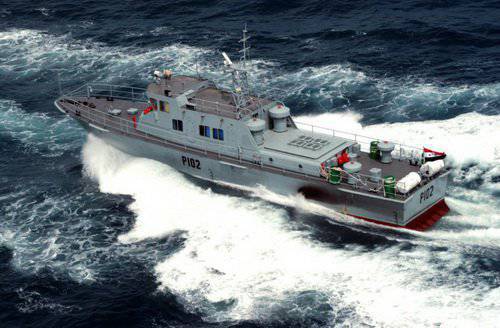 The first combat unit of the revived Iraqi Navy is the Nasir-type P-102 patrol boat.

At the same time, on the territory of Iraq itself, at the shipbuilding plant in Basra, the forces of American and Iraqi specialists brought the patrol boats of the Iraqi project Al-Ubor (Al Uboor) to a limited-combat state of the 2 patrol boats. After entering the Iraqi Navy, they occasionally went to sea. Used mainly as training and auxiliary boats, and already in 2010, they were enlisted in the reserve.

7 patrol boats turned out to be extremely small even for the small Iraqi Navy. Moreover, they did not quite meet modern requirements. In particular, boarding units (due to small rooms and a small upper deck) and inflatable motorboats were poorly placed on boats of a large size. Moreover, it turned out that the shipbuilding facilities in Basrah have retained their performance. Therefore, on the basis of the Al-Ubur project, it was decided to build a new, more sophisticated patrol boat, the project of which was called Al-Fao. 17 February 2005 was signed a contract to build six new Iraqi patrol boats to support the local economy. The first boat of the PC-201 or Al-Faw-1 project was put into service in the Iraqi Navy six months after construction began, and the last series - PC-206 or Al-Faw-6 - July 17 2006, that is, after the 18 months since the signing of the contract. 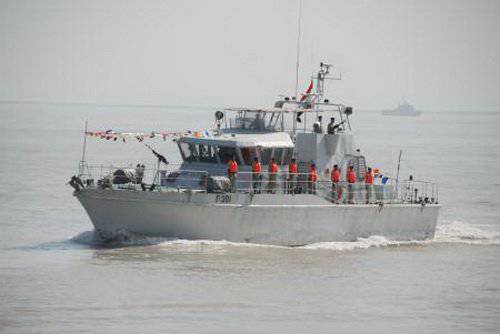 In the 2005-2008 years, the United States transferred the 10 lightweight speedboats to the new Iraqi Navy (in fact, motor boats with a rigid hull and outboard petrol engines).

After the withdrawal of US troops 11 November 2008, the creation of a new Iraqi Navy was officially announced.

Currently, the Iraqi Navy has about 1500 people and includes: 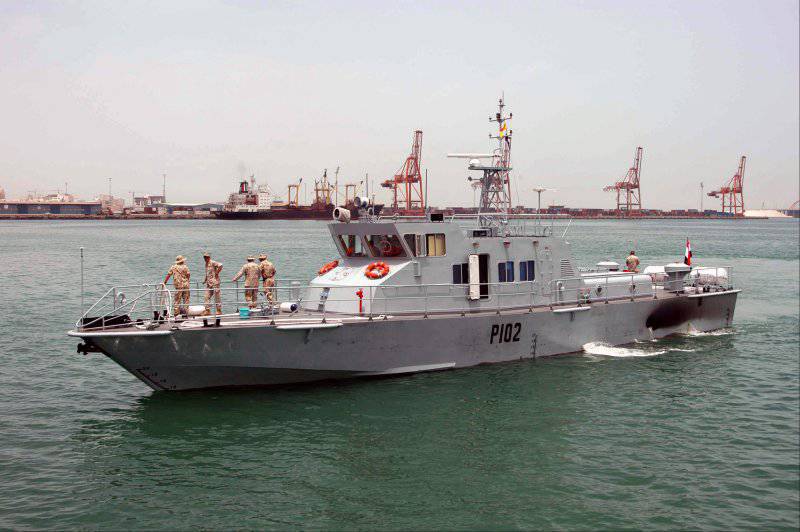 - 2 US-built patrol ships of the OSV 401 type (Al Basrah OSV 401 and Al Fayhaa OSV 402). Transferred in December 2012. The ships have a steel hull structure with an aluminum superstructure. The total displacement of the ship is 1400 tons, the length of 60 meters, the width of 11.2 meters, the deepening of the full load 3,8 meters. The power plant includes two Caterpillar 3516C diesel engines with 3150 horsepower. with jet propulsion. Maximum speed of 16 knots, cruising range to 4000 miles on 10 knots. Crew 42 man. The armament includes one MSI-Defense Systems Seahawk A30 2-mm remote-controlled automatic artillery mount, as well as four 12,7-mm and six 7,62-mm machine guns. The ship is equipped with three quickly launched semi-rigid 9-meter motorboats, and can be used to transport cargo containers or larger boats.

The new ships were to become the largest military units of the Iraqi Navy, designed to patrol coastal waters in the northern part of the Persian Gulf and used as floating bases and supply vessels for offshore oil platforms. The ships have a steel hull structure with an aluminum superstructure. 20 December 2012 of the year during a ceremony at the main naval base of Iraq, Umm Qasr, these ships are officially handed over to the Naval Forces of the Iraqi Republic. In fact, the introduction of multi-purpose patrol ships of the Al Basra type into the Iraqi Navy ends the formation of a new Navy of the country, which took a total of 8 years and about 1 billion dollars. 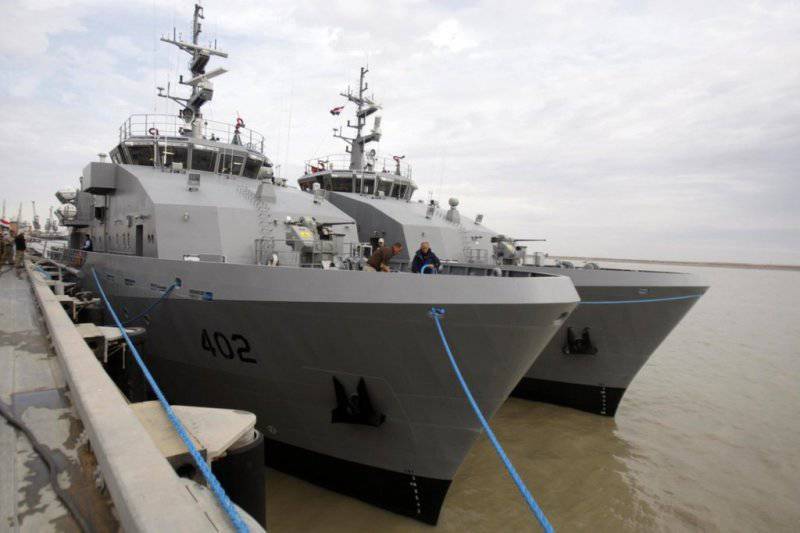 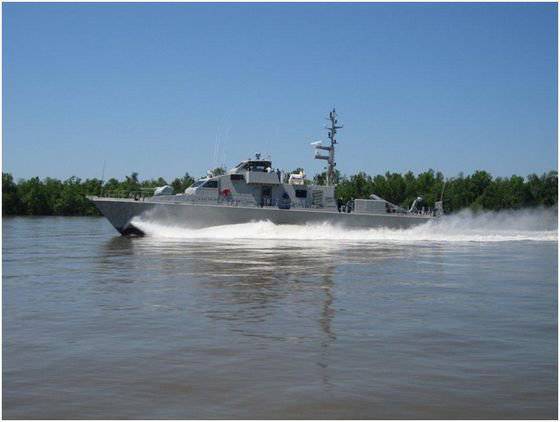 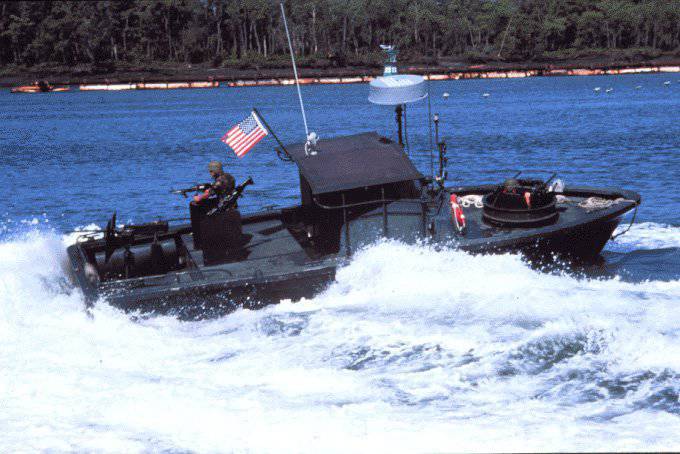 15 May 2014, the Iraqi government officially announced the final agreement for the transfer of the Iraqi navy of two Assad corvettes built in Italy for the government of Saddam Hussein and almost 30 years laid up in Italy by the Italian shipbuilding association Fincantieri. 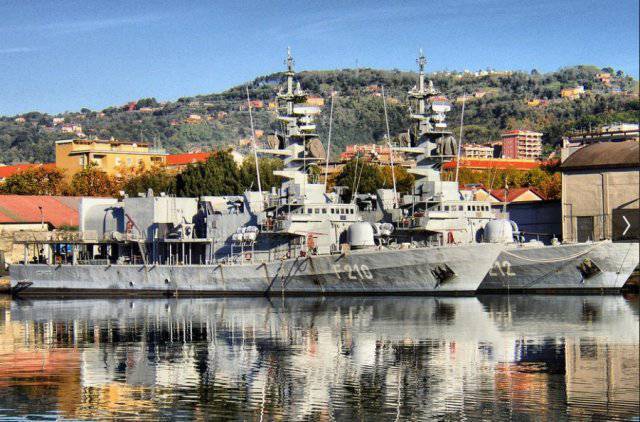 In 2010, a floating dock was finally towed to Iraq from Alexandria, now being used for civilian purposes. In 2011, the mentioned agreement was signed to repair, upgrade and return two Assad corvettes Musa Bin Nusayr and Tariq Bin Ziad and Agnadeen tanker, which were officially transferred to the Iraqi Navy in 1986. However, according to the latest reports, the contract has now been finalized with Fincantieri only two Corvettes from Spice are laid up for 28 years old, and the tanker in Alexandria will probably not be repaired and will be scrapped. 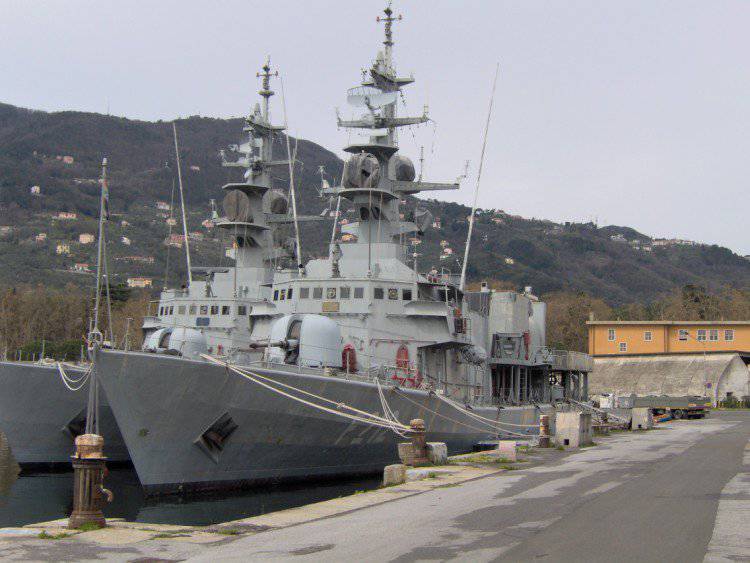 Details of the planned modernization of the two corvettes (full displacement 680 t, length 62 m) are not disclosed, however, their 76-mm Oto Melara Compact artillery mounts will be replaced with more modern Super Rapid. Apparently, the ships will receive a new anti-ship missile system. After commissioning, both of these ships will become the most powerful units of the new Iraqi Navy.

The military-political leadership of Iraq probes the soil for the construction no later than 2015 of a series of the latest missile boats, the acquisition of coastal missile systems of a mobile type, marine aviation and a sharp expansion of the combat capabilities of the country's marine corps. Today, preliminary consent for the construction of a missile boat division (5 units) for the Iraqi Navy has already been expressed by the relevant structures of Italy, Germany, France and China. In the future (until 2020), the government of Iraq for the country's Navy and missile ships (corvettes) with a large strike potential and range (2-4 units) cannot be ruled out. Moreover, in all cases, the choice of the type of anti-ship missile was made - this is the French Exocet, which has proven itself in the "Saddam" Navy of Iraq. True, now this is her latest modification - MM-40 blok 3.

Another type of warships, the acquisition of which for the Iraqi Navy was actively considered, starting with 2011, is mine-trawling ships. Where and in what quantity it was planned to build minesweepers - not reported.

For naval aviation, which they intend to create in the Republic of Iraq, by 2015, it is planned to acquire a squadron of search and rescue helicopters (at least 8 units), as well as at least 1 basic patrol aircraft or observation aircraft of the type available in the coast guard of leading countries of the world (the option of re-equipment for naval functions and 1-2 of the An-2012Б military transport aircraft delivered to Iraq in 32 by Ukraine is not excluded). Apparently, these aircraft will be equipped with strike missile weapons.

Given the experience gained by the modern Iraqi Navy, in the near future it is planned to significantly expand the capabilities of the marines. In particular, the question of creating two or even three brigades of marines is being considered. At the same time, one of the crews will be responsible for the safety of offshore drilling platforms and oil export terminals, and some of its units will act as boarding parties on patrol ships and boats of the Iraqi Navy. The second brigade will protect the ports and naval bases of the country, as well as perform the functions of coastal defense. The same tasks may be assigned to the third brigade.

The scenario of creating three brigades of marines of Iraq is not excluded. Under this option, the two brigades will be directly subordinate to the command of the country's Navy with the task of defending the coast. So, in the event of a military danger, they will be used as a strike component on the coastal direction or in a swampy area (for example, in the Shatt al-Arab delta or in the Majnon swamp area. The third brigade will be part of special operations forces countries (as it was in 1980-s, when a similar unit was part of the Republican Guard of Iraq) and only quickly will be subordinated to the command of the naval forces of the Iraqi Republic. 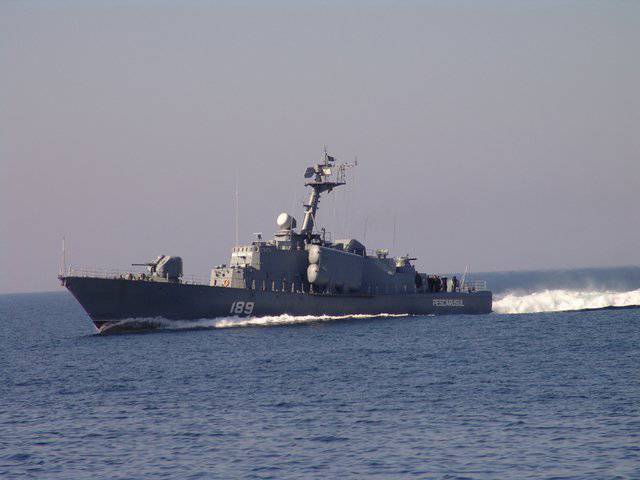 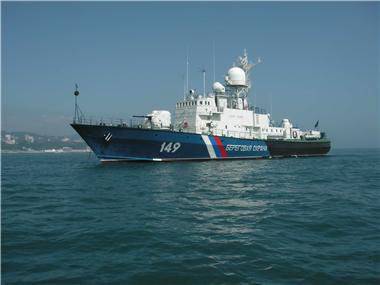