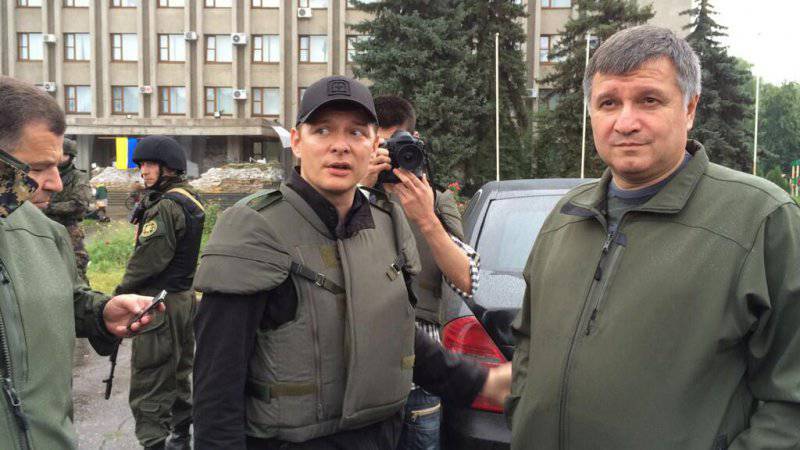 Arsen Avakov, one of the leaders of the Kiev junta, in his Facebook page called “marginal morons” neo-Nazi militants who had beaten Verkhovna Rada deputy Nestor Shufrich in Odessa. Because by this they discredit Ukraine in the eyes of Europe and America, which therefore can “turn away” from Ukraine.

In response, the deputy Lyashko, the militants who participated in the beating-lustration of the objectionable Shufrych, also answered through Facebook on Avakov: “The moron himself”.

Today, this children's caller (“fool himself”) is erected in Ukraine by political leaders. She is floated for any reason and at any political level. Starting with Euromaidan, his opponents shoot themselves, burn them (in Odessa), kill their own with the sole purpose: to discredit the Ukrainian "patriots" who, according to ukrology, are not Nazis at all, not fascists, but practically Europeans. This is Russia - a fascist, and Putin is Hitler, and the Ukrainians are all noble "lytsari", which declares Poroshenko, who came to power on the bits of the militants of Bandera, and therefore the fascist, "Right Sector". Here is the Ukrainian know-how. And European "lytsi" completely trust him.

But then Lyashko applied this political logic (“fool himself”) to Avakov, and the circle closed. Soon, anyone who doubts the lyricism of the pro-fascist militants will receive accusations of debilism and fascism from Lyashko and other fahrion ...

However, this “stupid” ideology was invented by not svidomye Ukrainians - they only brought it to childish absurdity. It has been used by the West for a long time, only in a more decent form: the policy of “double standards”, transferring problems from one's sore head to some healthy one, rewriting stories “For themselves”, civilized, while all the others are automatically bringing ... into uncivilized. Still, it is only natural that Hitler appeared in “civilized” Europe, and now Obama has appeared in America - a person with a complex of “exclusivity” of the American nation.

According to this "stupid logic" professors from Cambridge and Harvard have long put Hitler and Stalin on the same level. Great professors! What can be said about their Ukrainian followers, who only creatively develop European historical discoveries ... True, in Ukraine the ideology of “the fool himself” became self-sufficient and extremely vulgar: they reached the point of vandalism and mockery of historical monuments, rudeness to foreign statesmen. Not only the Russian president, but also the Czech Zeman got for a misunderstanding of the Ukrainian events.

Europe and America are silent, that is, they approve of the political rudeness of Ukrainian politicians and the media. This shows how much their “civilization” and “democracy” actually cost: they are not worth the paper on which Harvard professors write its praises.

In general, in the world today there are, by and large, only two independent countries: the United States and Russia. This was proved by the “Snowden effect”, and he also showed that the United States is a real police state, striving to become already a world gendarme. Russia is a truly free and democratic state whose political leader is supported by the overwhelming majority of the country's population. Not a single “developed democracy” can boast such an achievement, and they simply “do not see” it, God knows what (according to the logic of “on-children”).

The alternative in the current situation in the world is simple: either the world will bend under the cudgel of the American gendarme, or, together with Russia, liberate itself from American dictate. Despite the sanctions, the Second Cold War begins for Russia in more favorable conditions. Russia-USSR confronted the “golden billion” of the West almost single-handedly, its allies were more likely to be parasites, and what they cost in reality was shown by the 90s.

Today, Russia has real allies that can be relied upon, who have already come to Russia for help, helping to withstand the sanctions blow of the West. The BRICS and SCO countries are a reliable rear of Russia, they understand that their national interests coincide today with Russia's, and therefore Russia doesn’t need to prove anything to them. They understand that if Russia bends under the West in Ukraine, they will also be unsatisfied. But Russia will not bend, because today there is someone to rely on.