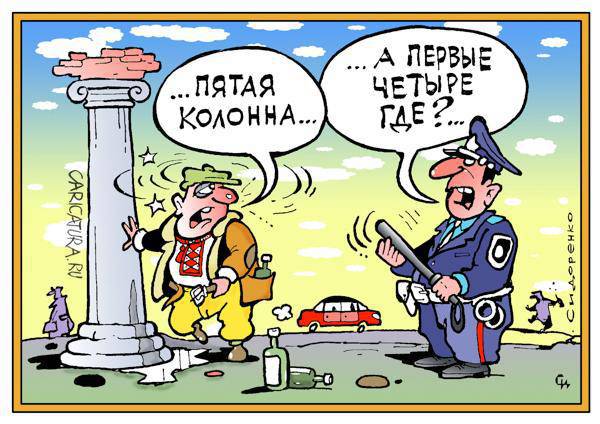 The term “5-I column” has been used by mankind for a long time, for several generations already, and long enough for the origin of the term to start hiding in the darkness of eternity. It has already reached the point that members of the Internet community voluntarily assume the responsibility to educate those who are not so tempted in stories colleagues about who and when introduced into the political revolution this concept.

I, too, will take the trouble to remind, but not in order to demonstrate reading, but to indicate the existing gap.

So, the authorship of the term "fifth column" is attributed to various people (up to Mussolini), and the difference in the date of appearance varies from several weeks to two decades.

According to classical views, it was originally the figurative name of the Francoist agents in besieged Madrid, which was supposed to support the attacks of the four army columns of General Emilio Mol from the rear.

During the years of WWII, the term "Fifth Column" called German agents in European countries.

But Hitler's Germany was not there for a long time, and the term not only remained, but also gained a new meaning.

Today, it means internal enemies, namely:
- foreign agents;
- agents of influence;
- political groups that secretly or explicitly oppose the basic policy of the state in their own interests;
- terrorists;
- businessmen with interests abroad.

It should be noted that, by analogy with the “Fifth Graph”, all the above-mentioned are often added to the Jewish population of Russia, implying that a Jew is born with a stone in his bosom, and he has been wondering all his life how to bargain “this country”. But a discussion of the validity of such a statement is beyond the scope of this article.

A fleeting excursion into history was needed in order to show that the existence of the “Fifth Column” notion does not mean that the first and the second exist somewhere. This term is independent, and the number does not mean numbers in order. But still, in perception, the term seems to be taken out of context by a piece of some sort of classification.

It would be possible not to speak about this, if lately more and more often the sixth column was not mentioned. That is, there are actually two of them. And if so, the question is, why start the countdown with the fifth and where are the first four?

And here, given the fact that the civil war in Spain is increasingly shifting to the area of ​​legends and legends, it is time to deal with the terms and give the system some kind of slimness.

I am not sure that my classification will be introduced into wide use, but, nevertheless, I will try to dream up what the first and subsequent columns could be in relation to the state and the people.

The first, the smallest, is people who put the interests of their country (not to be confused with the state) above their own. Above so much that they are ready to give their lives for them. It is from these people that volunteer units are formed and popular leaders are born. These people went to the militia in the First World War, in the First and Second World War, fought in Abkhazia and the Balkans, rushed to Ossetia in 2008, and now they smash svidomitov in the Donbas. These people understand that they will not be able to sit out, and it is better to stop the misfortune earlier, before it has reached the threshold of your own house.

The second is people who share the views of the first, ready to work and deprivation. But they will give life only if there is no other way out. In this case, their heroism and self-sacrifice will be no less than that of the first column. In the meantime, they vote for independence, as militiamen can help, and they die after being captured as accomplices.

The third - in principle, is not opposed to reap the benefits of the efforts of the first two columns, but on the condition that you don’t have to do anything yourself, and the misfortunes and deprivations will not affect them personally. Their maximum participation - Like. All scandalous reports about the shaking rights of Ukrainian refugees in Russia describe individuals of this particular category. The only thing I can say in their defense is that the lack of state thinking is not a sign of promiscuity, it is a natural feature (like color blindness).

Fourth - the classic "hatsoskrayniki", ready to swear to anyone who will gnobit not very much and will allow more or less tolerable to exist. These people are able to adapt to any power, order, religion, morality. These people make up the majority in the electoral lists; politicians in election manifestos appeal to them and appeal to their “public opinion” when they need to do something dirty. But they do not determine the course of history.

Separately, I want to share my conclusion that the fourth column is the social base of a democratic society. While in the authoritarian base are the first and second, for the leaders, despots and kings relied primarily on the active part of the population, for whom loyalty, honor and loyalty to the oath is not an empty phrase.

The fifth column is, in my understanding, paid agents of foreign states, deliberately harming their people. The same can be attributed to agents of influence who ingenuously think that by committing an act of betrayal, they thereby pursue higher goals, therefore they are holy ascetics who are not subject to the laws of karma and who suffer innocently.

Again, I can not voice a personal relationship. I can't forgive the paid ones, but I can understand. I cannot understand and forgive those who betray the country, sincerely believing that they are committing an act of “good” to it and that the sacrifices are in the name of such good and not the victim at all, but a justified necessity.

The term “sixth column” appeared first of all describes businessmen with interests abroad who are not hirelings of foreign intelligence services, but for whom betrayal is an element of business preservation. It is these individuals who are now listed in society as responsible for the discharge of Novorossia. Perhaps, in private, they would be wholeheartedly and for. But business, business suffers from sanctions. As they say, nothing personal. Often this category also includes our top officials, who are quite satisfied with the status quo and for which Russia's reinforcement is an excessive anxiety and inconvenience (life without jamon, Parisian shopping, difficulties with movement and the acquisition of real estate in Europe).

This could be finished if it were a homogeneous society. But this is not. In reality, society is divided into those in power and the rest, who are called the word "electorate", which in fact is a tolerant replacement for the words "ohlos" and "cattle".

That is, the true picture of the world is at least a two-layer one. And between them there can be numerous layers of the type of creative intelligentsia, mouth singers, feather jackals, “creacles” and “glamorous worms”, which differ from each other only in color and degree of fatness.

But the main, boundary, layers of two - like the two halves of the roll, they hold between them a little appetizing content in the ugliest generation of urbanization.

If we use such a scheme, then we can formulate the upper, additional layer for each of the columns, consisting not of ordinary people, but of those in power.

The first. Nationally oriented bourgeoisie and bureaucracy. Unfortunately, modern Russia has not revealed those, or they are cleverly disguised. But the world knows such cases. All colonial empires really moved by these people. The East India Company is the clearest example. When the interests of Britain completely coincided with the mercantile interests of shareholders, the company actually ruled India.

Theoretically, Rosatom, Gazprom, and the military industrial complex are claiming the role of such a company. But these are state-owned companies. Of the oil companies carry out economic expansion in Iraq, Venezuela, Vietnam, too, state-owned companies - Rosneft, Gazpromneft. And private oil barons, on the contrary, are ready to trade profitably with their property. Recall Khodorkovsky. Let's imagine that instead of trying to sell Yukos, he bought several oil companies abroad, bought up technologies, transferred profits in Russia. In this case, the words of his presidency would not have caused a sarcastic grin.

The second. The business community, which is economically beneficial to a strong national state due to the expansion of the domestic market, and by protecting the interests of national entrepreneurship abroad. Metallurgists, for example.

Third. Entrepreneurs, whose business environment is highly dependent on the stable state of the state and who may lose profits in internal and external conflicts. Therefore, stability at any cost is a basic requirement for them.

Fourth. Entrepreneurs who are confident that their business will be claimed by any authority, therefore, for the sake of their own preservation, they can simultaneously finance both democrats and communists just in case. Gazprom, which is financing Echo of Moscow, was noted here, which only confirms the thesis on the deep penetration of the column into state structures.

The sixth. But the sixth column practically consists of the upper layer. There is no bottom for traitors from among the inhabitants remain at the 5 level. Including remain on the fifth level and hamonofili left without their favorite food.

The result is a curious design.

If the sixth column has no bottom, then the first has no tire.

And if the second-fifth columns existed for a long time and somehow learned to coexist, then the first and sixth are outspoken and irreconcilable antagonists. They are antagonists to such an extent that they have a vested interest in destroying each other. And vital in the truest sense. The victory of one column means the physical elimination of the second.

The sixth column is afraid that the volunteers returning from Novorossia will take it. And reasonably afraid. I am convinced that all the unjustified losses of our volunteers are the work of the frightened sixth column. From here and "arrival" on Strelkova who is capable to lead people.
Accordingly, for the first column, the treachery from the sixth side passed from the abstract concept to the most practical plane.

This was noticed by many analysts and they are already discussing: who will win in the upcoming battle for the future of the country ...

But first you need to win in New Russia. This is the key to victory over the fifth and sixth columns.