The Pentagon creates a global network of tactical groups 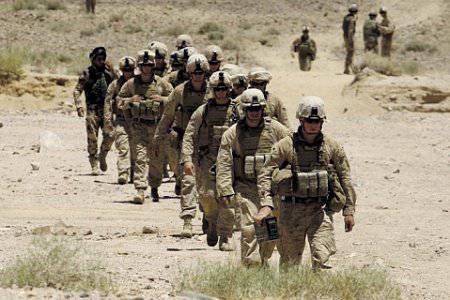 The Pentagon is creating a tactical group of rapid reaction forces in the Persian Gulf. She will be stationed in Kuwait, will consist of marines and will have 2,3 thousand military personnel. Washington plans to use it, including against the militants of the "Islamic State" (IG). Special purpose mobile units become the basis of the American strategy to respond to world challenges, experts say.

The commander of the US Marine Corps, General James Amos, reported that about half of the planned number of troops arrived in Kuwait. The connection within the US Central Command is planned to be provided with an air component. According to some data, we are talking about shock and military transport aircraft, AV-8B Harrier attack aircraft, MV-22B Osprey tiltroplanes and KC-130J Super Hercules refueling aircraft.

The rapid reaction force in Kuwait is being set up in response to the terrorist attack in the Libyan city of Benghazi on 11 on September 2012, when Ambassador Christopher Stevens and three more American citizens died. There was a need to ensure the possibility of a quick evacuation of the US diplomatic mission in the event of a similar aggravation of the situation in a particular Middle Eastern country.

So, the group was conceived before Washington launched a war against the IG. However, since the task of the rapid reaction forces is to respond promptly to emerging security threats and humanitarian crises in the region, marines, according to Amos, can be used to strengthen the security of the US embassy in Baghdad, rescue pilots shot down during air strikes against jihadists or advisory function to the Iraqi army. Adding fundamentally different tasks is not excluded, because, according to the commander of the 8 regiment of the 2 division of the Marine Corps, Colonel Kenneth Detryu, we need to look at the situation through policy and diplomacy points: “We just need to remain flexible and mobile ".

Similar marines already exist at Moron bases in Spain and Sigonella bases in Italy, and were also created in response to the Benghazi incident, but under the US African command. In a short time, this group was expanded from 500 to 1,4 thousand military personnel, it was reinforced with new units aviation (e.g. C-130 Hercules military transport aircraft). The marines of the African command showed themselves at the time of the last crisis in Libya. On July 26, a group of 80 marines took more than 150 employees of the American embassy through the desert to the Tunisian border. The trip lasted six hours. The group was ready to carry out transportation on convertiplanes, but the head of the diplomatic mission, Deborah Jones, considered this way too risky. However, during the operation, both the MV-22B Osprey and the KC-130J Super Hercules were still involved.

In US military terminology, such units are called special-purpose airborne tactical groups of the Marine Corps (VNTGMSN) and change the traditional understanding of the actions of the marines as military personnel landing from the sea. The number of tactical groups is likely to grow. According to Amos, Washington’s goal is to turn VNTGMSN into a kind of global service “911”. According to Brigadier General John Love, another VNTGMSN should be created under the US Southern Command (Central and South America, the Caribbean), but so far there is a shortage of budget funds. In addition, the Third Marine Expeditionary Division, now consisting of four battalions, has been restored in the Asia-Pacific region, and the presence of the US Marine Corps is increasing in Darwin and on the island of Guam (US territory).

Analyst of the New American Security Center, retired US Navy officer Jerry Hendrix believes: further development of the Marines' rapid response forces should follow the path of reducing the number of groups and placing them on coastal control ships and high-speed ships in order to unite forces at the right moment. On the pages of the Wall Street Journal, Amos answered the expert: “In a perfect world, we would rather create just such sea-based groups. But now we don't have enough ships. ”

Thus, in the light of the experience of the protracted ground campaigns in Iraq and Afghanistan, the Pentagon relies mainly on small rapid reaction forces. Pavel Zolotarev, Deputy Director of the Institute of the USA and Canada, RAS, emphasized in an interview with NG that the creation of a tactical group of marines in Kuwait illustrates a general trend that John Kennedy designated after the Caribbean crisis. Opening the special forces training school, he said that there would never be a war between the USSR and the USA, therefore the use of special forces is relevant. After the end of the Cold War, the United States took the path of closing down the bases with a large number of personnel and replacing them with small groups. “The open use of the Armed Forces in modern conditions is very problematic (it is necessary to hide behind semi-legitimate forms such as“ peacekeeping operation ”or“ humanitarian mission ”), unlike using special forces, the expert explained. “Despite the fact that now in the USA the pace of increasing defense spending is slowing down, sequestration forces are the least affected. This is a well-established priority. ”