The ring around Transnistria is compressed 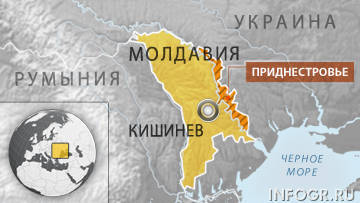 Soon the fairy tale is felt, but it is not done soon, but nevertheless, Ukraine and Moldova are eager to become full-fledged subjects of the European Union. At the same time, passionate speeches are heard from Bucharest about the upcoming unification of Moldova and Romania by the will of either the Romanian people or the Romanian prime minister. The main person of Transnistria, Yevgeny Shevchuk, visited Moscow and spoke about the great difficulties that the unrecognized republic faced.

It is quite obvious that the dark world forces have chosen the Pridnestrovian Moldavian Republic as the next object, which turned out to be in the strip of geopolitical confrontation with Russia. On the side of the dark forces are the governments of the European Union states, dancing to the tune of not only bureaucrats from Brussels, but also Washington. The same dance is danced by politicians from Moldova and Ukraine. American music seems to like a lot. But Russian music, unlike the Soviet one, is not very impressive.

The unfortunate Transnistrians are actually in economic blockade. Some of their neighbors, and indeed a significant part of the so-called world community, declared a boycott to them. The non-existent referendum in Kosovo, about which Mr. Obama from the White House recently announced, is the will of the “Kosovo people”, while the real referendum in Transnistria (2006), in which more than 97% of voters voted for joining Russia, - it is as if nothing. Apparently, because Moscow can be seen beyond Tiraspol, and Moscow, as everyone now knows, has fallen out of love with the West. Unlike Chisinau or Kiev, which Brussels shoes are ready to clean.

In the current political conflict between the West and Russia, aggravated by the situation in Ukraine, Europe and the United States use all means to destabilize the regional situation. And Transdniestria, which already does not look like a paradise, can be as good as possible for solving imperialist tasks.

That is why the “international community” is not at all agitated by what is happening on the border of Transnistria (where Ukrainians dig in and where they bring heavy military equipment), as well as inside the unrecognized republic. There are no voices of the OSCE, nor the UN, nor any famous "human rights activists" and fighters for the rights of Homo sapiens. The ventriloquists of the open world economy and liberal preachers of competition are also something not to be heard. All the water in your mouth scored!

Meanwhile, a crisis situation developed in Transnistria. The PMR president even left everything to do and arrived in Moscow. To talk about how and how the republic lives.

Speaking at a press conference at which representatives of the major media asked him questions, Comrade Shevchuk said that Moldova violated obligations under the Moscow memorandum by signing an association agreement with the European Union.

“According to this memorandum concluded at the highest level in the presence of OSCE representatives,” he quotes ITAR-TASS- Moldova had to make a decision in coordination with Transnistria. ”

Shevchuk stated that the association agreement does not take into account the interests of Transnistrian commodity producers. “We are interested in integration with the Customs Union and are trying to build our relations in this direction, although, of course, we are ready to cooperate with all countries and markets,” said the President of the PMR.

Also, Transnistria does not like the lack of publicity in the actions of Moldova and Romania in the field of security. Chisinau and Bucharest recently signed a military cooperation agreement. And the provisions of the document, Shevchuk believes, "allow the participation of the Romanian army in some operations on the territory of Moldova." Of course, this causes “well-founded fears” among Transnistrian authorities.

In addition, there are calls for the withdrawal of Russian peacekeepers from the region. According to Shevchuk, it is necessary to find a political solution to resolving the situation, and only then "it will be possible to talk about it, and now it only destabilizes the situation."

With regard to the difficult economic situation of the PMR, the president noted that the republic would like to increase exports to Russia. However, the PMR lacks investment.

“At present, Russia accounts for 16% of Transnistrian exports,” said Shevchuk. - Within the framework of interdepartmental contacts, agreements were reached on increasing supplies, the volume of which in the first eight months of the current year increased by 24%. We hope to return to the Russian market primarily with our high-quality food products, but the reorientation will require additional investments associated with changes in product groups that would be in demand in Russia. ”

The crisis situation in the regional economy is connected with the decision of the Moldovan authorities. The President recalled that in the 2006 year, Moldova had changed the mode of exporting Transnistrian goods in order to divert the flow of products from east to west. The result for Pridnestrovie turned out to be predictably sad: trade with Russia and the CIS countries was sharply reduced, the Transnistrian economy suffered losses (in total for all the past years - 480 million dollars). Especially this man-made crisis hit the transport enterprises engaged in international cargo transportation. And now the conflict in Ukraine. As a result, cross-border trade in Transnistria has declined, trade has fallen, and budget revenues have decreased.

Because of the actual blockade of the republic, the PMR does not have money to pay for Russian gas at market prices.

“We, as proper partners, are ready to switch to the program of transition to settlements at market prices for gas supplied from Russia to Transnistria when releasing the Transnistrian economy. To do this, all participants in the negotiation format, not only the Russian Federation, but also Moldova, Ukraine and the OSCE as a participant in the negotiation process, and the EU need to create for the economy not any preferential, but usual conditions for the transit of our goods, ”said the President of the PMR.

RIA "News»Also cites some data on the state of the economy in the republic. Transnistrian Foreign Minister Nina Shtanski reported earlier that only in 2013, the direct losses of Transnistrian economic agents amounted to 250 million dollars. The announced amount is comparable to the current consolidated budget of Transnistria. The economic blockade affected not only the transport sector, but also the banking system.

Moldova’s signing of the Association Agreement with the EU “without taking into account the interests of Transnistria” coupled with the blockade led to “pressure in the republic, budget revenues are falling, there are problems with the employment of citizens, unemployment,” the PMR said.

In addition, Yevgeny Shevchuk reported that there are difficulties with the movement of men with Russian citizenship across the Transnistrian-Ukrainian border. “The number of people not missed on the border with Ukraine is already from 600 to a thousand people. We have always had good, good-neighborly relations with Ukraine. In Transnistria, the situation in this country is being resolved. We wish our partners in Ukraine to find political consensus ", - Shevchuk quotes IA "News of Transnistria".

The head of the Transdniestrian Moldavian Republic also told about the difficult political situation that has developed around Moldova's euro interest.

“As for Moldova, as you know, they now have political events held within the framework of elections. It is obvious that Moldova is following the path of increasing integration with Romania. Many different advisers appear in the power ministries in Moldova, including in the Ministry of Defense, and in the information security service. Advisers from the Romanian Ministry of the Interior are already arriving. I don’t know what they advise there, but lately, for some reason, the interaction between Tiraspol and Chisinau has intensified. As you know, criminal cases are initiated against our officials. Just recently, Moldova blocked the issuance of certificates for our agricultural producers, as well as taking a number of other unfriendly actions regarding Transnistria. But we very much hope that this has nothing to do with the fact that some political forces in Moldova themselves have come up with a paradigm for themselves, within which they want to divert attention from the problems within Moldova to the problems of the worsening situation between Tiraspol and Chisinau. We hope that the elections will be held, and the situation will stabilize. So far Transnistria is not actively responding to provocations.

Shevchyuk's fears about Moldova’s rapprochement with Romania are well-founded. Recall, the Romanian Prime Minister Victor Ponta 14 September stated that no later than 2018, the “second great unification of Romania” could be accomplished. Ponta is the man who decided to change Traian Basescu as president. Elections in Romania will be held soon - November 2.

At a meeting with an activist of the Romanian Social Democratic Party in the city of Alba Iuli, Mr. Ponta bluntly stated that Moldova would become part of Romanian territory.

In the Russian Foreign Ministry they resented: “From the candid appeals of the candidate for the presidency of Romania to“ make the second great union by 2018, ”it is clear that certain political circles in Bucharest still feed the annexationist plans of the neighboring sovereign neutral country.”

It is, however, highly doubtful that such "annexationist plans" should be realized. If the Romanians are not averse to getting rid of the Moldovan territories, then the Moldovans are not at all eager to become Romanians. Several hundred thousand citizens with Romanian passports are all who have already “voted” for “Greater Romania”. In fact, these people are just looking for work in the EU countries.

As for the blockade of Transnistria, which wants to draw closer to Russia, that is, fresh historical examples. One of the outcomes of the Ukrainian crisis was the return of Crimea to Russia. Infringement, squeezing in the economic grip of Transnistria will sooner or later lead to an adequate reaction, and Transnistria will again raise the issue of Transdniestria as part of the Russian Federation.

Recall that in March of this year, the Supreme Council of the Transdniestrian Moldavian Republic proposed the State Duma of Russia to develop a law that would allow the republic to be accepted into the Russian Federation.