Key words of Vladimir Putin at the investment forum "Russia is calling!" 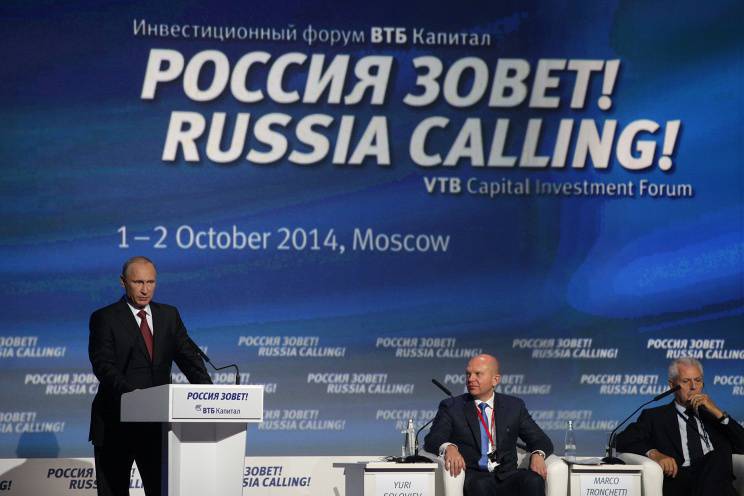 Russian President Vladimir Putin took part in the “VTB Capital” 6 Annual Investment Forum “Russia Calling!”. The session, in the framework of which the head of state spoke, is called "Development of Russia: in search of new opportunities." According to the presidential press service, the agenda included topics of attracting international investors to Russian markets and increasing investments in the Russian economy in the current situation in the world and sanctions imposed on Russia.

This was the second and final day of the forum. On the eve, the leaders of the largest Russian companies and representatives of the financial and economic bloc of the government spoke on it.

In particular, Vladimir Putin said that he expects Russia to be a "free and prosperous country."

"We are persistently moving towards the goals we have set ourselves. We sincerely want to build a strong, prosperous, free and open to the world country," the Russian leader said.

On sanctions against the Russian Federation

The President of the Russian Federation called the “complete foolishness” the actions of foreign governments, which limit their business in such a promising market as Russia.

Moscow calmly regards the restrictions imposed on it. “You shouldn’t dwell on it,” advised Vladimir Putin. However, he believes that the sanctions "violate the fundamental principles of the WTO, undermine the credibility of international financial institutions, currencies." In his opinion, sanctions will also have long-term negative consequences for the global economy.

External restrictions create an additional incentive for Russia to achieve results in priority areas of development. "We will consistently solve the tasks facing Russia."

At the same time, Putin guaranteed assistance to domestic organizations suffering from sanctions: "The state is ready to support those sectors and companies that have come under the immediate effect of sanctions, including taking part in increasing the capital of Russian banks."

About cooperation in the framework of the WTO

"We share the principles of the WTO, unlike some of the" founding fathers ", it seems, of this organization," said the president. According to the head of state, the Russian Federation will strive to develop as an open, market economy. “This strategic course remains unchanged,” Putin assured.

According to Putin, the EAEU created from 1 in January 2015 will represent the 170 million market "with free movement of goods, services, capital". "This project is able to bring serious benefits for domestic companies and foreign investors," said the president.

On the economy of the Russian Federation

In January-August of this year, the federal budget of the Russian Federation has a surplus of over 900 billion rubles. The federal budget of 2015 of the year and for the period of 2016-2017 of the year, which the government sent to the Duma, suggests a very moderate deficit - only 0,5-0,6% of GDP, with the base price of oil $ 96 per barrel. These are stable basic parameters that allow one to strictly fulfill all budget commitments, including social ones, ”the head of state concluded.

According to him, the reason for this increase is clear - "it is in the growth of prices for some food products." “This is an additional incentive for us to develop our own agriculture,” Putin said. He stated that "monetary inflation does not exceed the figure for 5% planned for the year."

Despite currency fluctuations, the fundamental factors that ensure the stability of the Russian economy are very strong.

“I would emphasize the main point: the fundamental factors that ensure stability are very strong and reliable: it is a deficit-free budget, significant reserves, and a strong balance of payments,” the head of state emphasized.

Putin recalled that 15 years ago had the task of doubling GDP and "many just laughed at us." “And we did it,” the president stated. Speaking about the current situation, he admitted that the trend in the economy has changed, although no one can predict by 100% what, for example, will be the price of oil, and other important indicators and risks. “We still believe that we leave the goals unchanged, but we will have to look for tools that will allow us to achieve them, or at least come close to these goals,” Putin said.

The President did not rule out the incorporation and IPO of some energy companies and defense industry enterprises. "Our defense industry today produces 25% of civilian products, and in order to make these enterprises more flexible, more efficient, more competitive, we do not exclude that some of them can be corporatized and put on the stock market, on the market," Putin said. . "We are now considering the possibility of entering the market with large packages of our largest energy companies," he added.

Putin noted that the transition of the Central Bank to a floating exchange rate does not mean a complete abandonment of currency interventions. “The Bank of Russia has enough tools to ensure financial stability,” he explained.

He does not intend to overhaul the internal debt either. “We will increase domestic debt, because it is at a record low level here. But we will act carefully,” the head of state said. After all, economic growth must be ensured "not at the expense of pumping with liquidity or financial instruments, but at the expense of structural changes in the economy of the Russian Federation."

Russian banks will be able to work on the territory of the country with the cards of leading foreign payment systems, even if they are disconnected from these systems, Putin assured. According to him, "mechanisms have already been created that allow operations with the use of plastic cards of leading payment systems to be performed on the territory of the Russian Federation even if domestic banks are disconnected from these systems." And during 2015, a national payment card system with an infrastructure independent of the international systems will be created: a single operational center and its own payment instruments. It should ensure the safety and confidentiality of payments.

He is pleased that many serious foreign investors continue to work in Russia. "Along with the development of foreign trade, export promotion, participation in integration projects, we intend to fully use one of Russia's competitive advantages - a large domestic market," the head of state stressed, recalling that in terms of volume, he ranks sixth in the world.

“Our task is to make an industrial breakthrough in the coming years, to create strong national companies in the manufacturing sectors capable of producing competitive products,” Putin said.

Moreover, "in renewing the economy and infrastructure, they intend to use both their own financial resources and sources, and to intensify cooperation with investment funds, banks from other states."

On the prospects for imposing restrictions on capital movements

On revising the results of privatization and the case of Bashneft

“There will be no mass revision of the privatization results,” the head of state emphasized. At the same time, Putin drew attention to the fact that one case may differ significantly from another systemically and qualitatively.

Speaking about the situation with Bashneft, Putin stressed. that is not going to interfere with it and give any directives. "This does not mean at all that the state is aiming to start revising the privatization results on a massive scale; this will not be accurate," he concluded.

Moscow is not interested in curtailing economic ties with Europe, however, it considers cooperation with Asian countries, primarily with China, the most promising.

Responding to questions from participants in the Russia Calling Forum, the head of state drew attention to the vigorous growth of the economies of Asian countries, particularly China. Putin believes that China’s economic growth should be used to develop the economies of other countries.

"Russia also thinks about it. And it does not think yesterday, not in connection with sanctions and restrictions of a political nature," the president stressed.
Russia is pursuing a course on the increasing use of the national currency in foreign economic calculations. The pioneer here was Gazpromneft, which was the first in a trial mode to put oil for rubles to China. "In the future, we intend to actively use national currencies when trading energy resources, while making other foreign trade settlements, both with China and with other countries," said the head of state. He recalled that a corresponding mechanism was created within the framework of BRICS. “We see in the use of national currencies a serious mechanism for reducing risks, new opportunities for participants in economic life,” Putin said.

He called cooperation with China as a whole a trend that did not emerge today, during Western anti-Russian sanctions, but a few years ago. “Among the priorities is the deepening of business, trade, investment, technology partnerships with the countries of Latin America, the Asia-Pacific states, with our BRICS colleagues, including with China,” Putin said.

On the situation in Ukraine