The offensive of the IG is beneficial to Russia ("Reportér magazín", Czech Republic) 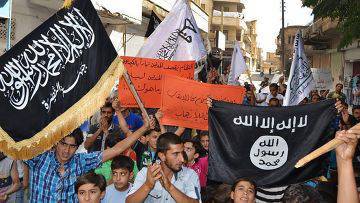 Politicians and experts argue who represents the greatest threat - Russia or the Islamists. But it is clear that Russia can benefit from the conflict in Iraq and Syria.

In recent months and weeks, the international community’s attention has been attracted by the conflict between pro-Russian separatists and Kiev in the east of Ukraine, as well as the fierce “Islamic State” campaign in Iraq and Syria. At the recent summit of the North Atlantic Alliance, its participants came to the general opinion that the West was faced with the most serious deterioration of the security situation since the end of the wars in the former Yugoslavia.

It is clear that current events cause many experts, and politicians, the question: what is the greatest threat to the international order. “Islamic state” or Vladimir Putin, who, according to many, aspires to the actual revival of the Soviet Union? However, the answers to this question are much more complicated than I might seem at first glance.

The outgoing NATO Secretary General, Anders Fogh Rasmussen, who will be replaced by Jens Stoltenberg at the beginning of October, recently said that Russia, unlike the Islamic State, is not a threat to the North Atlantic Alliance. Despite the fact that Russia's behavior in Eastern Ukraine is unacceptable, and in this light, NATO will take a number of specific measures that are intended to besiege Russia in its aggressive policy towards its neighbors, Rasmussen believes that Moscow is very well aware of the Alliance’s determination in collective defense issues. , and a certain line, which is a direct attack on one of the NATO member countries, Russia will not cross. Rasmussen also adds that unlike fanatics from the “Islamic State”, Vladimir Putin can be engaged in dialogue.

Eastern Ukraine on the way to freezing the conflict

A similar opinion is shared by Kurt Debeuf, a former member of the European Parliament from the liberal faction ALDE, who in a study for the Carnegie Europe tink tank emphasized that what Moscow is trying to do in Eastern Ukraine is not new and not surprising: "Philosophy is clear - if you will leave me, I will do everything so that you will not be with anyone else, ”paraphrase Debeuf’s approach of Moscow and assumes that everything is moving towards establishing a status quo like that in Moldova, Georgia or Azerbaijan, that is, frozen confley the.

Nonetheless, Lina Khatib, director of the Middle East Study Center at the Carnegie Europe Center, is unconditionally convinced that the Islamic State is most definitely a threat to international security.

Former British Defense Secretary Bob Ainsworth, who recently declared to the Guardian, fundamentally disagrees with this point of view, that modern Russia poses a greater threat to world peace than the Islamic State. Ainsworth believes that no matter how inhuman and inconceivable would be the crimes of the “Islamic state”, this is still a non-state subject that does not have a fraction of the human and material potential of Russia, which, under the leadership of Vladimir Putin, is going to put the world in cold war, as Stalin did.

Ozgur Unlugisarchikli, director of the Turkish branch of the American Marshall Center, believes that the question of who poses the greatest threat, the Islamic State or Russia, depends on the angle of view and is very individual. Yes, from the point of view of Europe, primarily from the positions of Eastern European countries that are very dependent on gas supplies from Russia, Russian expansion towards the Black Sea can be a much bigger problem than the terrorist campaign for their own state in the Middle East. For Turkey itself, the answer - “Islamic State” or Putin - is not so simple. Yes, almost 70% it depends on the supply of energy raw materials from Russia, but on the other hand, the country is in close proximity to the areas controlled by the "Islamic State". In addition, the Islamic State has recently kidnapped several Turkish citizens from Mosul and is holding them hostage.

The described dispute has found its continuation in the Czech Republic. Former Foreign Minister Karel Schwarzenberg criticizes the alleged cynicism with which Russia treats the threat of the “Islamic State”, and is skeptical about the possibility of normalizing relations with Russia because of the terrorist threat, until Russia stops supporting pro-Russian separatists in eastern Ukraine and does not return the Crimea. President Zeman at a conference on the Greek island of Rhodes, organized by his friend (and also a figure close to Putin, and the general director of Russian Railways, Vladimir Yakunin), downplayed the significance of the conflict in Ukraine and called for the lifting of sanctions and alliance with Russia in the fight against “Islamic State ". While the crisis in Ukraine, according to Zeman, is a “temporary flu”, the “Islamic state” is “cancer”, over which the West should cooperate with Russia. Pro-Russian, which has already entered and Peter Nechas. According to the Echo24 server, at a conference at the CEVRO Institute, he called for an end to the escalation of hostility towards Russia and for the demonization of Russian President Putin to stop. The former prime minister had to add that in the medium and long term, Russia is a potential ally of the West in connection with such threats as the “Islamic State” or conflicts in Africa.

Contrary to the Russian position, which accuses the West of its current activity of the “Islamic State” and its support, which it had previously provided the Syrian rebels, in fact, the offensive of the “Islamic State” plays to Moscow. The horrific footage of the executed journalists and the reports from the Iraqi-Syrian battlefield, where the West initiated the third armed campaign with unclear results, come to Russia’s considerable joy, as it all distracts from the quiet war she wages in Ukraine. And it works not only for Russia.

Moscow could take advantage of the escalation of Islamism in Chechnya

In this regard, the decade that followed 11 September 2001 of the year is instructive. While the United States was engaged in operations in Afghanistan and Iraq, China managed to build a navy, which today plays a significant geopolitical role against the background of the deteriorating security situation in the East China Sea. Similarly, Russia took advantage of this period and modernized its armed forces, and also learned from its “Caucasian campaign” in 2008, in order to then demonstrate the capabilities of its armed forces in the Ukrainian conflict. There are also messages that indicate that jihadist fanaticism may spread from the Levant just to Chechnya or Dagestan. So Moscow would gladly take advantage of the global anti-jihadist struggle to strengthen its position in the Caucasus.

In general, any security threat is specific in its own way, and it is very difficult to say whether it has the potential for further escalation, when it will be, and under what scenario. It is indisputable that for the Western civilization, as well as for Putin, the “Islamic state” is a great threat. The question is, can the Islamic State become a catalyst in the relations between Putin and the West? Putin will need the West to avoid isolation, and on the other hand, the West can use Putin to suppress the Islamists. The question remains the price of this partnership.