October 3 2014
49
Well, tell me: how can you not “love” the current Ukraine? .. This is a miracle state with miracle rulers! You make sure of it every time when you get acquainted with the aspirations and initiatives of the Ukrainian authorities and the most active Maidan-men. Dumping the monuments of Ilyich, knocking down symbols of the Soviet Union from the walls of buildings with machine butts or baseball bats, cursing "tips" and "Bolshevik contagion," sometimes appear absolutely incredible for the current "Square" thing to come to the fore. What is the wave of initiatives from state and regional authorities to revive the Soviet system of basic military training in Ukrainian schools ...

It all began with the adviser to the Minister of Internal Affairs of Ukraine, Mr. Gerashchenko, who said the following:
We need to strengthen our defenses in all its directions. Including, for example, starting to cultivate respect for military duty, for military duty from school years. As it was instituted in the Soviet Union and was undeservedly forgotten. 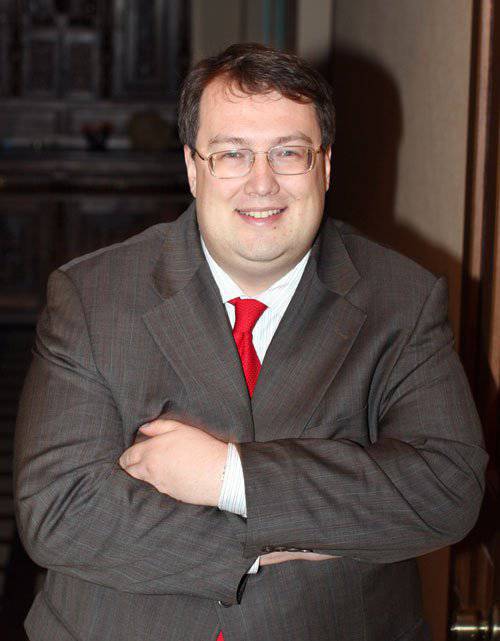 After this, it remains to use the popular Internet meme of all-consuming perplexity: "Shta ??? !!!"

Well, definitely the country of defeated logic. First, to cheat the Soviet system in all its manifestations, to bring the degree of media hatred to everything Soviet, which Kiev associates in any form with the Russian, to transcendent values, and then it's just to take and recall the Soviet educational and educational experience ... Well done! Applause, turning into an ovation, for the sequence!

The Gerashchenko initiative, as it turned out, was not buried in the Maidan garbage can with Gerashchenko himself. She cheerfully picked up in the government and "on the ground." Among those caught up was the Ukrainian Ministry of Education. Then the initiative “launched” into the regions. The chairman of the Ivano-Frankivsk Regional Council, Vasiliy Skrypnychuk, plans to take the most active part in the implementation of the initiative. He declares that the Ministry of Education is pushing the initiative to the regions. This Ukrainian local official said that in schools, the “independent” course of military studies should be introduced from the 6 class.

What, according to Skrypnichuk, need to be implemented as a training program? First, it is the techniques of handling weapons. Secondly, the basics of military-specific medical care: the treatment of firearms, shrapnel wounds, burns, etc. By the 14-15 years, Ukrainian students will have to go to a special course in which they will be informed (attention!) Of strategic military planning and intelligence activities. Ivano-Frankivsk MP suggests calling such a course “Defender of the Fatherland”.

We supported the idea of ​​starting military training in schools in Ukraine and in other regions of the country. For example, the education department of Vinnitsa region stated that the need to teach children the basics of military affairs was overdue (quote) "due to the conflict situation in the country."

Well, if overdue, so overdue. But is this course being introduced in a timely manner? The beginning of teaching military training (from the 6 class) in Ukrainian schools today for the most collapsing into parts of Ukraine is akin to the fact that jogging in the mornings and hardening was prescribed as a course of treatment for a terminally ill person bedridden ... late to drink Borjomi ...

By the way, you should pay attention to the personality of Skrypnichuk who supported the initiative of Gerashchenko. This 56-year-old deputy is a frankly Nazi party "Svoboda", the leader of which - Pyagnibok - recently sent to the "ATO" zone another batch of cannon fodder under the guise of the Sich battalion. In July, Skripnichuk himself wrote a statement to the military registration and enlistment office in order to be taken to the ATO as a volunteer in the wake of “pre-dovayovsky ukropatriotism”. More than 2 months have passed since then, and news of how “bravely Skrypnichuk fought the enemy” was not reported to the press ... Apparently, the press in Ukraine could not detect either Skrypnichuk, not even a person like Skrypnichuk, zone "ATO". Such an ambiguous silence in the media probably prompted the Ivano-Frankivsk official to remind himself, focusing on the military training initiative of 6-graders.

If we consider who will be preparing, then this will not be the Soviet experience, which Gerashchenko will suddenly recall, but a peculiar variant of the Hitler Youth ... Well, or, as the Military Review attached, about the training of the Sokol children's battalion, screaming (1 : 16-1: 17) "Muscovites - Death" - a junta.

Here is the video:


And this is a photo of 15-16-year-old teenagers training in one of the Neo-Bandera training camps in Lviv region. 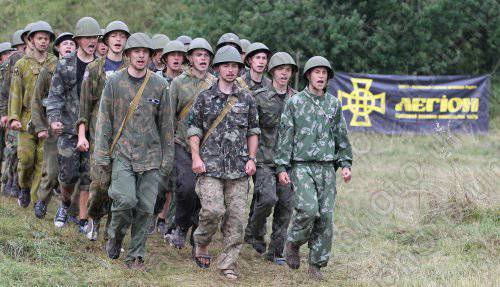 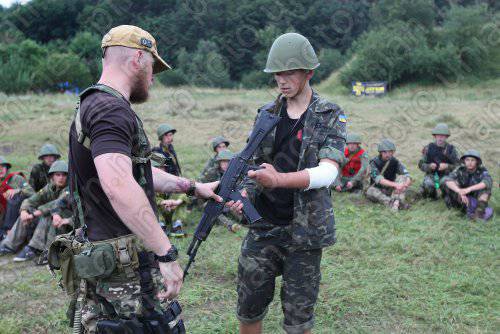 Symbols appropriate, instructor - also
And this country still has plans for the future? ..