About the Turkish peaceful atom

October 3 2014
11
The other day in the Western press appeared assumptions about Ankara's “baton”. Analysts, experts, bloggers revived, and within a week Erdoganov's Turkey became almost a new Iran, allegedly secretly making a nuclear bomb from scrap materials. Ankara, having paused a little, the statements about the underground development of nuclear weapons refuted. 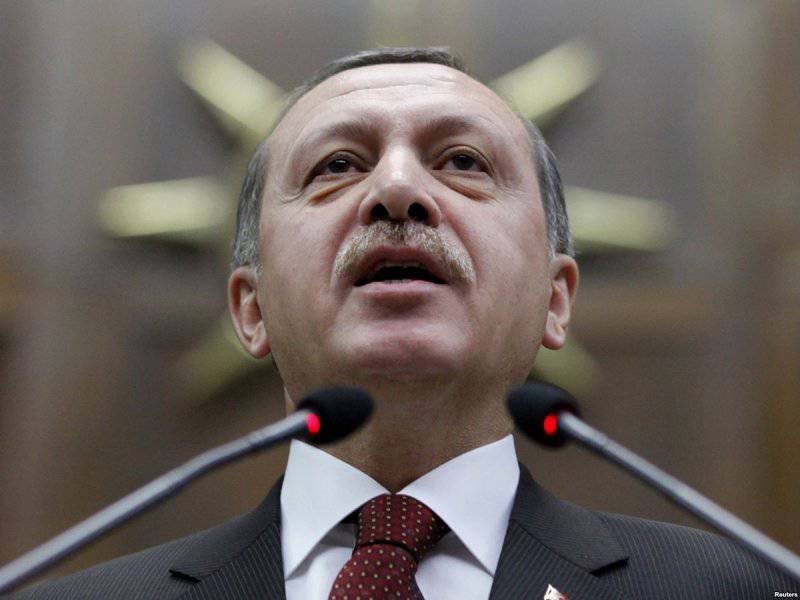 Original source news on the nuclear plans of R.T. Erdogan - article by Hans Rühle (Hans Rühle) in the German newspaper «Die Welt». The material has a hitter headline: "Auf dem Weg zur Bombe?" ("On the way to the bomb?")

According to Ryule, who at one time (from 1982 to 1988) worked as the head of personnel planning at the Ministry of Defense, the Federal Intelligence Service (BND) is spying on Turkey. Intelligence may concern a nuclear weapons program. The author of the article considers that there is evidence.

There is more evidence that Erdogan wants to strengthen Turkey with nuclear weapons. But if the controversy surrounding the Iranian nuclear program and talks about provocations of North Korea appear regularly in the media, then the work of Turkey (the expert reads its obvious) is "practically not discussed publicly."

Meanwhile, intelligence from Western countries largely converge on this issue.

According to the analyst, the Turks have clearly chosen Iran as a model for their own strategy. Ankara, like Tehran, is developing nuclear weapons "under the guise of a civilian nuclear program." No wonder Turkey in recent years has launched a large-scale program of civilian civil energy, reminds Ruhle.

Ankara has adopted uranium enrichment technology. For nuclear power plants to operate, uranium must be enriched from 3,5 to 5%, in order to create nuclear weapons, to at least 80%. But the technical process is basically the same, the expert writes. And so the peaceful atom as a cover is suitable for those who are not averse to acquire nuclear weapons.

According to the Federal Intelligence Service, Erdogan already prepared in 2010 a secret construction of uranium enrichment facilities. According to other intelligence, Turkey already has a significant number of centrifuges from Pakistan. It may well be that Turkey has both materials and Pakistani know-how.

The analyst also stops at the Turkish rocket program. In December 2011, Erdogan suggested that the defense industry develop long-range missiles. True, the program on medium-range missiles is currently being implemented. The type of missiles with a range of 1500 kilometers the Turks tested in the 2012 year, and a rocket with a range of 2500 km should be ready for the 2015 year. The medium-range missiles, Rüle explains, because of their low accuracy and payload are only suitable for weapons of mass destruction. And the program for their preparation is a strong and even “very strong” argument pointing to Ankara’s current program to develop nuclear weapons, the expert said.

However, what exactly is pushing the political leadership of Turkey to create nuclear weapons?

In August, 2011, the Turkish ambassador to the US, Namik Tan said: "We cannot allow Iran to have nuclear weapons."

Two years later, Turkish President Abdullah Gul clarified this position in an interview with Foreign Affairs magazine: “Turkey will not allow a neighboring country to have such weapons that Turkey does not have.”

In a survey conducted in 2012, 54% of Turkish respondents from among the 1500 respondents favored creating their own nuclear weapons - in order to have a counterbalance to Iran.

Given that Israel already has nuclear weapons and that nuclear Iran can also become nuclear, the expert concludes, the Turkish Prime Minister has no choice but to give his country a bomb - especially if he wants to realize his vision of Turkey as great. powers.

There are other experts who are confident in Turkey’s nuclear "vision".

Gazeta.ru cites the opinion of the leading analyst of the military and political analysis center INEGMA in Dubai, Theodore Karasik. He believes that Ankara’s desire to acquire nuclear weapons is associated with “Turkish nationalism.” Nevertheless, she will have to play by the rules: “Despite the fact that the United States keeps its nuclear weapons in Turkey, Ankara wants to develop its own nuclear forces, which will require it to comply with international protocols.”

"Turkey is a member of NATO, and within the alliance there is a tough nuclear strategy for the participating countries," said in an interview "Free Press" Academician of the Academy of Geopolitical Problems, Colonel-General Leonid Ivashov. “Therefore, Ankara without the consent of Washington — and the United States dominates NATO, especially in the nuclear direction — will not take a single step in the military atomic field. This means that the attempts of the Turks to unleash a nuclear program should be viewed as an agreed American-Turkish project. Apparently, the United States makes a certain stake on Turkey, most likely, they are trying to impose responsibility on it for the entire adjacent large region, including the Middle East. ”

Yevgeny Satanovsky, President of the Institute of the Middle East, shared his opinion with “SP”:

“Turkey’s nuclear weapons will inevitably appear. The problem is that today the non-proliferation regime is bursting at the seams. This proves, for example, the fact that the notorious world community could not do anything with the Iranian nuclear program, and will not succeed. As a result, Tehran at the talks with the "six" (five permanent members of the UN Security Council and Germany) on the nuclear program is engaged in bringing partners by the nose. "

As for the reaction of the inhabitants of the Middle East, Satanovsky presents the picture as follows: Israel "is preparing for anything, including a big war"; Iran’s neighbors are trying to acquire nuclear weapons; Turkey will try to develop it on its own; Saudi Arabia is likely to get everything from Pakistan.

Well, what does Turkey itself say?

And she refutes everything.

As reported ITAR-TASS, The Turkish Foreign Ministry called in any way inconsistent with the reality of the publication in the German press about the development of Ankara nuclear weapons.

"Turkey actively supports measures to disarm the region from nuclear weapons and is a supporter of international agreements in this sphere, primarily the Treaty on the Non-Proliferation of Nuclear Weapons," ITAR-TASS quoted the statement of the foreign ministry. The Turkish Foreign Ministry noted that "the appearance of such information in the press of the country, which, like Turkey, is a member of NATO and a member of the collective security system, is surprising."

If, however, we add on our own, to return to what the German expert H. Rühle wrote, especially to the comparison of the Turkish peaceful atom with the Iranian peaceful atom, then this statement of the Turkish Foreign Ministry will be exactly in line with the Germans' assumptions. Compare Ankara's denials with Tehran's denials. Except for the mention of NATO, everything else is practically Turkish tracing from the time when Iran’s president was Comrade Ahmadinejad.