I can see everything from above, and you know

October 2 2014
74
Currently, the topic of satellite imagery has become very relevant. This topic attracts the attention of ordinary people. A surge of interest followed after a terrible catastrophe that occurred in the skies over the Donbas in July 2014. Then, not far from Donetsk, the passenger liner of Malaysia Airlines was allegedly shot down from the ground. All 298 people aboard the Boeing-777 died. Both sides of the conflict in eastern Ukraine blamed each other for what happened. Actually, it was this disaster that raised the degree of interest in satellite imagery.

Immediately after the crash, US officials said that their spy satellites had recorded the launch of a ground-to-air missile. However, things did not go further than the words, and the pictures were never presented to the public. In response, the Ministry of Defense of Russia organized a press conference at which it presented its satellite images, which proved the deployment of Ukrainian air defense systems in the conflict zone, in particular, the Buk air defense system.

Actually, from the pictures published by Russia, one can draw some conclusions about the capabilities of such a reconnaissance system. It's funny that at the same time on TV at this time retold the myths of the Cold War in every way. We have all heard these myths more than once. This is a discussion about the possibility of "reading the newspaper, car number and counting the stars on the officer’s uniform." However, not one country in the world has such capabilities and technologies today. Moreover, the pictures published by the Russian Ministry of Defense give us a rough idea of ​​the capabilities of reconnaissance satellites. They (primarily specialists) can distinguish BMP from tanktank from air defense systems and so on. There is no talk of any reading of automobile license plates from outer space, and this is not required. 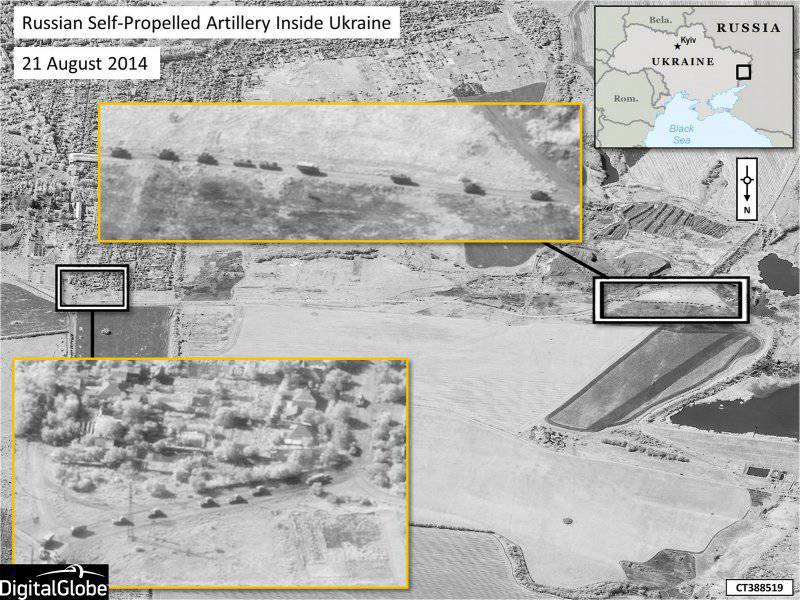 NATO published images were taken by a private company DigitalGlobe

Moreover, there are no idiots in the military department. That is why the Russian army buys and is actively interested in inflatable mock-ups of various military equipment. Modern weight and size models can fool any adversary, because it is almost impossible to determine from a space which tank in front of you - inflatable or real. Modern pneumatic mockups, which are able to imitate even operating engines, effectively solve their problems. Namely, they distract the blows of the enemy from the present technology, mislead him about the amount of equipment, its location on the ground and the locations of its deployment.

Now we will look at real photographs of what modern space optics are really capable of, and whether everything is visible from above. It is worth saying a special thank you bloggerwho collected material with these photos online.

For a start, a small discovery. The popular Google Map map service does not publish images that would exceed 50 cm per pixel. Moreover, until recently, the commercial distribution of images of similar detail was prohibited in the United States. Therefore, if you got a picture somewhere where you can see people walking along the streets, as well as other smaller details, then you have aerial photography. Posting aerial photography is allowed. This contradiction has long worried private companies, and they still managed to lobby for the weakening of the law. Now they are allowed to sell images that have a resolution of 25 cm per pixel. This indicator is the limit for modern commercial shooting from space.

It is worth noting that even in order to take pictures with a resolution of 25 cm per pixel, you need a very expensive, extremely complex technique. For example, DigitalGlobe’s modern WorldView-3 satellite is able to take pictures at 31 resolution per pixel. At the same time, a satellite uses a telescope with a diameter of the 1,1 mirror meter, and the total cost of the satellite is nearly 650 million dollars. This satellite was launched into 13 August 2014 orbit. 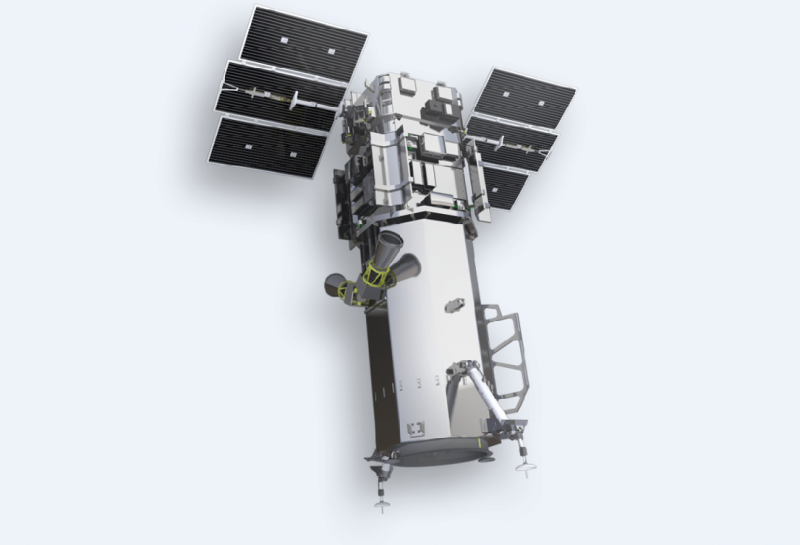 The satellite-observer Worldview-3 was designed by DigitalGlobe, which is a recognized leader among global providers of content for high-resolution earth surface maps. This company uses the services of NASA, as well as various US federal services. All cartographic Internet services, including Google Maps, Bing and Yandex maps, are also used by this company. At the same time, the more correct name of the Worldview-3 device is the Earth Remote Sensing (ERS) spacecraft.

This spacecraft consists of an 1,1-meter telescope equipped with an aperture filter, a shortwave infrared scanner (SWIR - Shortwave Infrared, technology allows you to shoot through fog, haze, dust, smog, smoke and clouds) and the CAVIS sensor specially developed by The Ball Aerospace (Clouds, Aerosol, water Vapor, Ice, and Snow), which allows for atmospheric correction of images. Every day, a similar remote sensing spacecraft can photograph up to 680 000 square kilometers of territory. The device is located in a solar-synchronous orbit at an altitude of 620 kilometers above the Earth's surface.

Already at the end of August 2014, the company DigitalGlobe presented the images taken by the WorldView-3 device - these are Madrid test shots with 40 resolution per pixel. To date, this is the most detailed images of the earth's surface, which have ever been published in the public domain. 21 August snapshots allow users to more easily determine the type of vehicles (trucks or cars, their models), as well as the direction of travel and speed. According to the company's specialists, for someone this can be very valuable information. 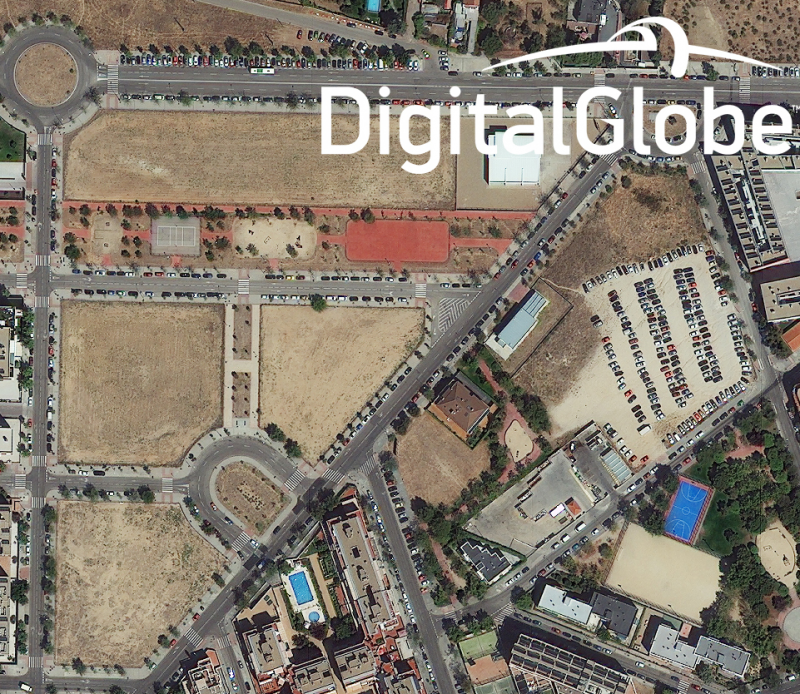 Fragment of the satellite imagery of Madrid using WorldView-3

On the published images of Madrid you can see a large number of details. Cars are easily distinguished from trucks, and in some places you can even see people swimming in pools, even if only in the form of small points. Madrid was not chosen by chance as a test survey: the closer the terrain is to the equator, the less cloudiness. It is also very often that the largest city in the UAE, Dubai, is chosen to demonstrate the capabilities of modern satellites. On the territory of the city a large number of interesting objects to observe, and the desert weather contributes to shooting.

The huge financial costs of developing such private spacecraft, which provide such quality of shooting, raise a reasonable question: how do they pay off? The secret is simple: more than 50% of orders from a private company DigitalGlobe - orders straight from the Pentagon. The rest is paid by companies like Google and individual customers. However, this is still a commercial private satellite. But what about the spy satellites that the CIA, for example, has?

Here everything is much more complicated, but quite predictable. Currently, the most famous and most powerful American spy satellite is a device belonging to the Keyhole-11 series. Key Hole in translation from English "Keyhole". A total of 16 satellites of this type were launched. The first launch took place 19 December 1976 of the year, the last - 28 August 2013 of the year. Reliably about these satellites almost nothing is known, even their appearance is not completely clear. Sometimes they can only be considered by amateur astronomers. It is worth noting that it was Keyhole-11 (KH-11) series devices that became the first US spy satellites to use an optical-electronic digital camera and that could transmit an image to Earth almost immediately after the survey was completed.

It is known that the most famous space telescope in the world, Hubble, assembled on the same production lines from which these spy satellites descended. A few years ago, the National Reconnaissance Office, the National Aerospace Intelligence Agency, donated two telescopes with a diameter of 2,4 meters to NASA, which they had in store. Taking this into account, as well as the fact that both the reconnaissance satellites and the Hubble telescope were put into orbit in identical containers, we can assume that the Keyhole-11 spy satellites also have an 2,4-meter mirror. 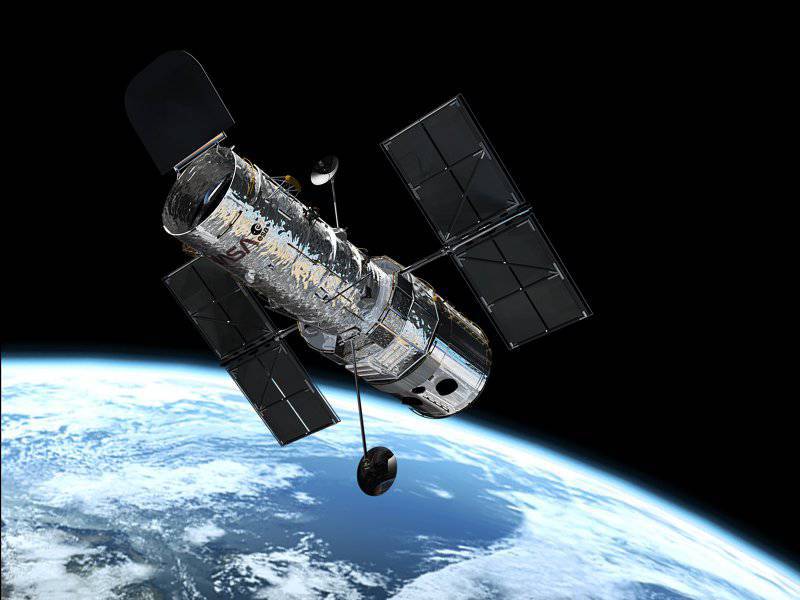 The most famous space telescope Hubble

If you make a simple comparison with the most sophisticated civilian satellite WorldView-3, whose telescope mirror size is 1,1 meters, you can determine by simple calculations that the quality of the spy satellite images should be about 2,3 times better (this is a rough calculation). And there is a difference. The WorldView-3 satellite orbits 620 km in altitude, while the youngest spy satellite Keyhole-11 (USA-245) flies from 270 to 970 kilometers above the surface of our planet.

It is known that, under ideal shooting conditions, the Hubble space telescope, located at an altitude of 700 kilometers, could have shot the Earth with a resolution of up to 15 cm per pixel if it were allowed to do so by technical capabilities. Accordingly, the Keyhole spy satellite at its lowest point could provide an image with a resolution of up to 5 cm per pixel. But It is worth noting that this is possible only under ideal conditions, in the absence of various atmospheric distortions, when there is neither smog, nor fog, nor dust, nor clouds over the subject. Due to the influence of the atmosphere and other factors, the actual resolution of the survey would hardly be lower than the same 15 cm per pixel as the Hubble telescope.

It is for this reason that the US military and various intelligence agencies are willing to pay private companies for the photographs provided. They simply lack their technical means of control. It is much easier to buy the necessary images from private companies than to create a huge number of reconnaissance satellites, the cost of which is currently comparable to the cost of large warships fleet. The Russian MSTA-S self-propelled guns or the Grad MLRS can equally well be photographed by modern civilian satellites and spy satellites. Moreover, the resolution of the latter in this case may even be excessive. 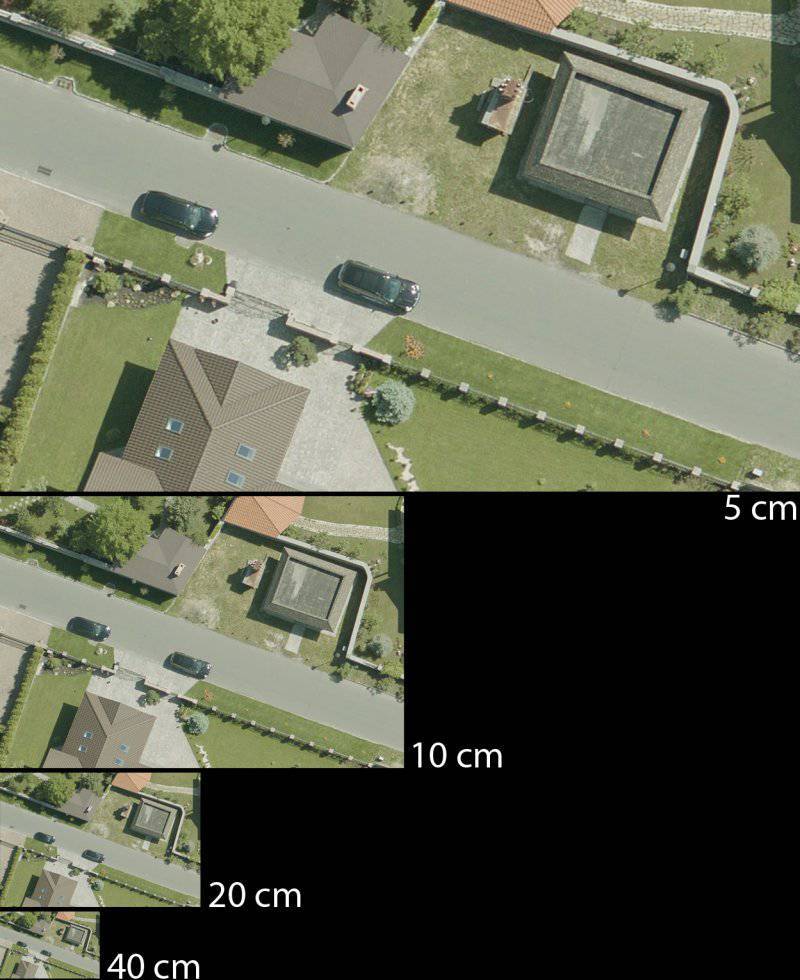 In order to visualize the quality of images in different resolutions, the above is a picture that is based on data obtained using aerial photographs of the area. The picture gives a clear idea that even in the most ideal conditions, theoretically achieving the image resolution in 5 cm per pixel, just one spy satellite will help you see the license plate on the car. In this case, you will see the number plate in the form of a series of white pixels, that is, you will find out that it is there, but under no circumstances can you read the number on it, not to mention reading the newspapers and looking at the shoulder straps: such tricks are physically impossible for now.