"Ukraine will no longer be a single state" ©

October 2 2014
80
The heat of discussion on the Ukrainian topic has not been reduced since the first radicals appeared in Kiev’s Maidan who organized an extremist sabbath in the center of the Ukrainian capital. The experts then thought about the fact that after using them as a resource, the radicals, who aspire to power, will rush to rush back into the holes and forest “plots”. 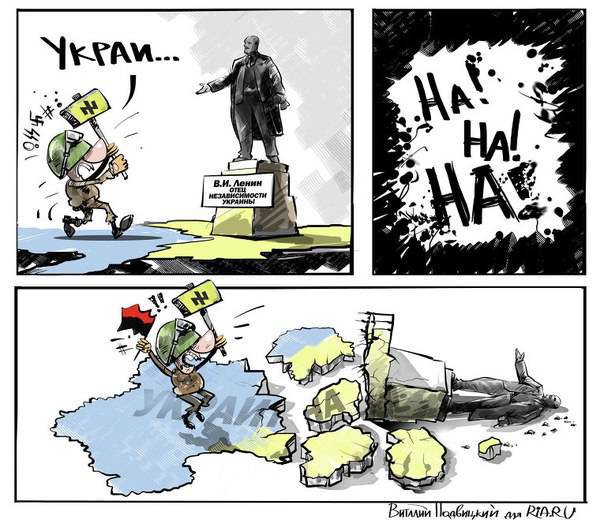 The idea that “the Moor has done his work, the Moor can leave,” was especially actively exaggerated after the physical destruction of one of the leaders of ukrootmorozkov - Sashko Muzychko (Bilogo). Avakov then announced that Sashko “shot himself himself” twice, and this gave reason not only in Russia, but also in Ukraine to think that Kiev was beginning to get rid of the most odious people.

But time passed, but odious people were not going to be removed from the Ukrainian political field. They have grown to the junta’s leaders so much that the latter actually didn’t have room for a demarcation maneuver with the neo-Nazi radicals. In the end, it came to the point that the Kiev authorities, merging with radical thugs in ecstasy, themselves lost all contact with objective reality, painting themselves (almost according to Klitschko ...) in frankly fascist colors. And when you hear from someone that you, they say, have gone completely crazy in Russia, for there are no fascists in Ukraine, then you want to send such a person away. If there are no fascists, then who started with the massacre of the offices of the Communist Party and Molotov cocktails on the Maidan, and ended up desecrating the memorial at Babi Yar, burning people in Odessa and shooting down civilians in the Donbas? Not fascists, but fighters for “human rights”? Well, if now it is called so, then it is clear ...

Watching the Ukrainian events in recent months, there are many questions that are difficult to answer. One of these questions can be formulated using the phrase from the film by Alexey Balabanov “Brother”, which the taxi driver utters (role played by Konstantin Zheldin): “There were people like people, and suddenly all of them became cretins! Paradox..."

And indeed, it could not have happened that in a state with more than 40-million population, brought up mostly by the same laws and moral principles as the Russian population, the vast majority of people suddenly rushed into trouble, with ecstasy perceiving information about the demolition of monuments, killings of civilians, torture, executions, persecutions? Couldn’t it happen that people took and massively oskokilis at the click of the fingers of one oligarchy, who replaced the oligarchy with another?

This question is answered by a man who at one time found himself in the thick of Kiev events - where the radical crowd met the appetites of vileness, rushing to power. This man represented one of the Ukrainian power structures and, fulfilling his duty, tried to resist the rampant Maidan radicals. At the personal request of the interlocutor, "Military Review" does not publish his real name and information about the unit in which he served.

Why such a conspiracy? - Some of our readers may wonder. To prevent such a question from arising, I explain right away: he still lives in Kiev, and plus he is actively involved in helping the militia in the Donbas. And to live in Kiev and make efforts to help the militias, exposing such activities for a general review with the publication of personal data is a sentence in today's Ukraine (without any exaggeration).

- No, not all of Ukraine has become a “zombie”. I will say more: the overwhelming majority of Ukrainians (based on numerous contacts in different cities of the country) do not support the authorities in Kiev. Cattle were always there, but now they just had a reason, material support and, most importantly, a chance. It also pushes them on new "feats".

But why, then, is what happens in the country: outrages, massacre without trial, torture, and the execution of civilians near Donetsk?

“So it happens that everything is without trial and investigation, as you yourself put it.” People understand that the main pillar of the current government is fascist scumbags. And not everyone can afford to express an opinion in the open. See what's happening in Kharkov today. But what is happening does not mean that all of Kharkiv is radical, neo-Nazi and fighters with monuments. The majority of people really fear for their lives and the lives of their loved ones, not expressing themselves openly. And this bulk does not want for its city to become a fascist stronghold. [/ I]

Is there an opportunity to really help those who are ready to fight the regime in Ukraine?

- And such assistance is already underway. After all, you are well aware of the partisan movements that are in the same Kharkov. These movements are not so powerful, and the bad thing is that they do not have a single focal point, but help comes through the confrontation line ... the front ... and to them.

Not so long ago, an interview with a volunteer from Russia came out on the Military Review, who said that people in the southeast did not know what they were fighting for, and neither those nor the others - nor the Ukrainian troops, nor the militia. Do you agree with this opinion?

- It is difficult for me to judge the opinion of another person ... But my personal opinion is the opposite. Many have a simple and understandable goal: to throw off the junta and return Ukraine a full peace. It is a pity that Ukraine will no longer be a single state - this is understandable by the split that occurred not only geographically, but also between people. Some hold power by scaring people into intimidation weapons, street reprisals (and it quite suits someone), while others are ready to fight this plague. It is clear that in the Ukrainian media everything is presented as if everyone in Ukraine supports the current government, but millions of Ukrainians (I am among them) do not believe the Ukrainian media today, well, we don’t take galloping zombies into account ...

This brief interview gives reason to judge that the lack of support by the majority of the population of Ukraine sent to the "Square" policy does not give a single chance to the junta and its henchmen. Yes - most are frightened and are, in fact, in a state of shock from a split and obscurantism. But the shock is sure to pass, and then the Ukrainian majority will say its weighty word. Will say!