China is developing a combat walker

Machines with walking propulsion have long attracted the attention of scientists and designers around the world. This technique in theory has a large cross in comparison with machines equipped with wheels or tracks. Nevertheless, despite the expected high performance, walkers, in all senses of the word, have so far failed to go beyond the laboratories and test sites. The real possibilities of such a technique are affected by the complexity of the design and the numerous difficulties that arise during the development. Nevertheless, scientists are not stopping work on promising technology with an unusual propulsion unit.

Not so long ago, it became known that the theme of the walkers, among others, are Chinese specialists. Dai Jingsong and other employees of Nanjing University of Technology have been doing various research techniques with a walking propulsion for the last time. One of the research topics is the study of the prospects for the creation of combat vehicles based on similar platforms. To date, three scientific papers have been published, which describe the progress and results of research. The articles are united by a common theme: they deal with the problems of creating a combat vehicle with a walking propeller carrying an automatic gun.

As follows from the available data, the three published articles address various aspects of a prospective project. So, the first describes the design of the base platform-walker and the combat module, the second deals with the features of the use of computer-aided design systems in the development and testing of equipment, and the third is devoted to the walking machine control systems, which ensure the effective joint operation of various components.

In the published materials, the development of the combat walker is considered on the example of a prototype, while it exists only in the form of drawings. This is a platform equipped with a walking propeller, a combat module with a cannon and supports for stabilization during firing. For obvious reasons, if the project continues, the appearance of the car can seriously change. In addition, the reason for additional changes may be the preparation for the production of the prototype.

The combat vehicle described by Chinese experts has an original appearance, due to the use of a non-standard propulsion. The basis of the machine is a rectangular box-shaped case on which all elements of the propulsion unit, combat module, etc. are installed. The internal volumes of the body are given for the placement of various units. It is probably proposed to arrange the case according to the classical tank scheme: the fighting compartment should be in the middle of the hull, and the feed is given for the power unit. 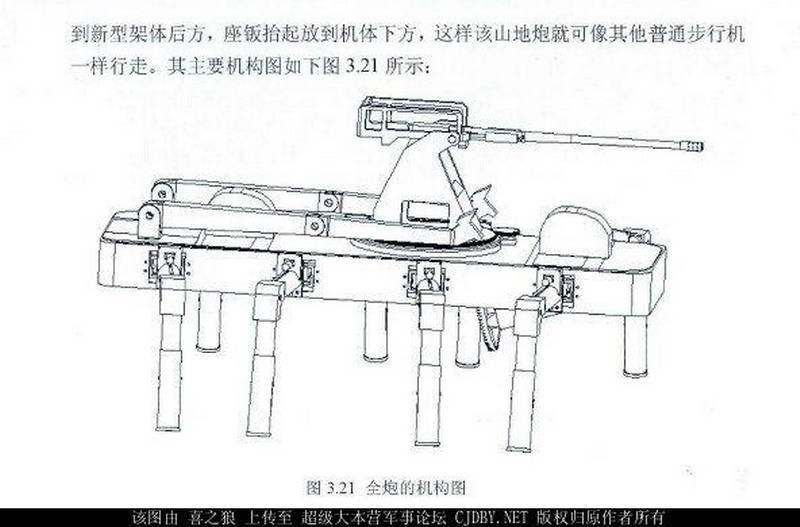 Apparently, in the proposed form, the Chinese combat walker cannot fire from an automatic cannon without preparation. To stabilize the machine when firing on the bottom in the front of the hull provides a lowered support. Two folding outriggers are located in the aft part of the hull and in the stowed position lie on its roof. If necessary, they fold out and abut the ground with openers, transferring to it the recoil of the gun and unloading the propulsion unit.

The combat vehicle depicted in the published pictures carries an uninhabited combat module, armed with an 30-mm automatic cannon. The combat module must be equipped with a number of necessary equipment that will allow you to monitor the situation, find and attack targets.

According to reports, the proposed walker has a total length of about 6 meters and a width (including propulsion) of about 2 m. The combat weight is unknown. Such dimensions make the car airborne, it can be transported by military transport aircraft and heavy transport helicopters.

Of course, the proposal of Chinese specialists is of great interest from a technical point of view. Unusual for walking military equipment, the propulsion unit should provide the vehicle with high cross-country performance on surfaces of various types, including cross-country terrain. Depending on certain features of the design, such walkers can overcome more serious obstacles than wheeled vehicles, approaching or exceeding tracked vehicles in their characteristics.

However, walking machines are not deprived of all sorts of flaws. First of all, it is the complexity of the mover. Such a minus is characteristic of all walkers, including those proposed by Chinese scientists. In the design of the undercarriage of a promising machine, it is proposed to use eight complex assemblies at once, incorporating various drives, sensors and other equipment. This situation is complicated by the need to use a special control system, which must independently assess the position of the car in space, track the position of the legs and pillars and manage their work in accordance with the driver’s commands. 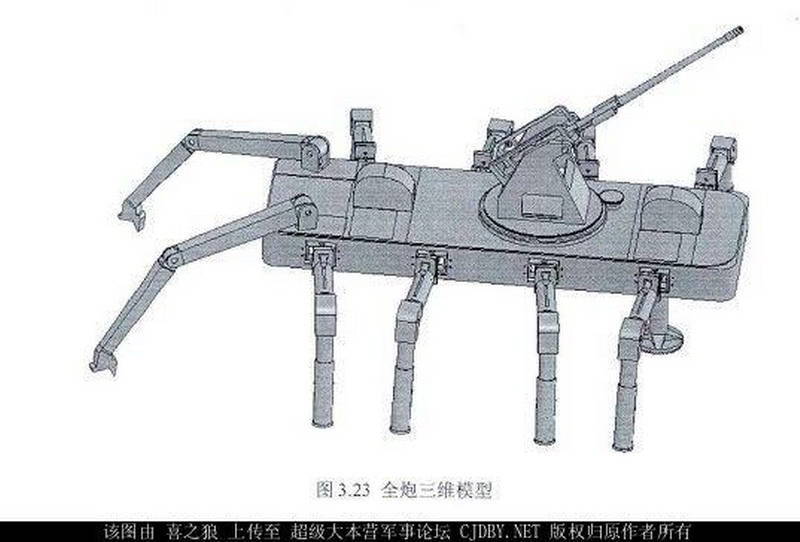 It can be noted that the staff of Nanjing University of Technology to some extent reduced the complexity of the walking propulsion unit. On the published diagrams it can be seen that complex drives are available only on the upper parts of the legs. The lower parts of the supports, apparently, are made in the simplest possible way. This allows you to simplify the design of the machine and control system, however, limits the permeability. First of all, the possibilities for overcoming obstacles are deteriorating, the maximum height of which decreases markedly. In addition, the lack of adaptive supports limits the steepness of the climb and the maximum roll of the machine.

In fact, in the present form, the Chinese combat walker can only move efficiently along roads, for example, in urban environments. With certain restrictions, the machine can work in other areas, both on the plains and in the mountains. In this case, however, it is necessary to take into account the features of the propulsion unit and the associated limitations. The use of 30-mm automatic cannon will allow the machine to carry out fire support for troops in direct collision with the enemy.

For obvious reasons, now you can only study the published information, draw conclusions and predict the prospects for the development of Nanjing University of Technology. For some quite a long time, the proposed combat walker will remain an exclusively experimental project aimed at exploring the features and prospects of such equipment. As for the combat module with an automatic cannon, it is most likely used exclusively as an attribute of the combat vehicle, which allows for a more complete study of the prospects of such equipment.

The Chinese draft of the military walker is of great interest, but its prospects are at least ambiguous. Scientists around the world have been actively engaged in such technology over the past few decades, but even the most successful samples have so far failed to exit the prototype test stage. With all its interesting features, Chinese development is unlikely to be able to break such an unpleasant "tradition." Moreover, it can remain at all at the stage of creating drawings and theoretical study of the concept.

Nevertheless, the very fact of the existence of the project of the combat walker can say that China is engaged not only in projects that can be beneficial in the near future. Promising areas are also interested in Chinese specialists. At the same time, however, we should not forget that the subject of walkers is very complex and therefore it is not necessary to believe that Chinese scientists will be able to quickly and successfully complete existing and promising projects in this area.