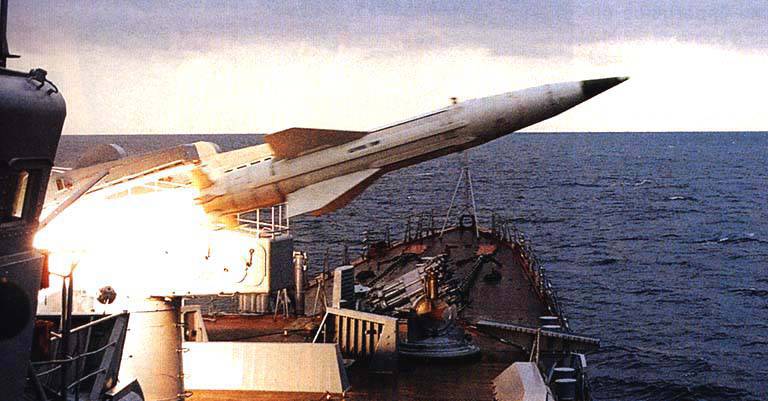 The development of cruise missiles is closely related to the work of Soviet scientists. Rocket weaponIt was precisely as the main shock tool that first appeared on warships of the Soviet Union at the turn of the 50-60 of the last century. Other countries did not appreciate it at first. But after October 1967, the situation has changed. During the Arab-Israeli conflict, which lasted six days, the Egyptian-type Komar rocket boat, which was equipped with Soviet anti-ship missiles, destroyed the Israelis destroyer Eilat from the first attack.

This event had a great influence on countries rethinking their weapons. Leading naval powers began to actively develop this type of naval tactical weapon. The most famous examples of this class of weapons were created at that time: the French Exocet rocket (started development in 1968) and the American Harpoon (started working on the project in the late 60s). During this period of time, the first developments by the Soviet Union of an anti-ship missile (RCC) of a similar class - 3M-24E (aviation an analogue of this weapon - X-35E). It is noteworthy that all three samples from the point of view of military-technical ideology are almost identical.

These missiles are also similar in terms of targeting. In all of these types, an inertial guidance system is used in conjunction with a radio altimeter, which has high accuracy, and an active radar homing head (later the satellite navigation system was used, but on some samples the passive method was used). For the most part, the detection of CRP is difficult due to the flight at subsonic speed and a small movement altitude (from 3 to 5 meters).

When the United States and France only developed the first subsonic anti-ship missiles, the Soviet Union was already successfully working on developing guided missiles that had high flight performance. These were the Moskit-E ship complex (3М-80Е missile, the flight speed is about 800 meters per second) and the X-31А aviation anti-ship missile (the flight speed reached 1000 meters per second). Due to the high speed of movement decreases the time when the rocket is in the so-called anti-missile defense systems of the enemy. Thus, the risk of the destruction of these missiles by the enemy is reduced. The creators of these samples, experts say, have made a real breakthrough in the development of technology, which, mainly, has become possible thanks to the introduction of a combined propulsion system of a new type. It included a ramjet engine and a booster solid-fuel unit. Even now, this technology of Russian developers is not used by any foreign company. France is only working on some possible options for its implementation.

Now Russia is successfully implementing these two areas of RCC development: both small-sized subsonic and supersonic.

Recently, several more Russian samples of supersonic RCCs of the Club system with 3М-54Е (ТЭ) and 3М-14Э (ТЭ) rockets, developed by Novator Design Bureau, and Yakhont with RPC 3М-55Э, developed by NPO Mashinostroeniya ". In terms of their combat capabilities, these systems are the operational-tactical class of anti-ship weapons. It should be noted that during the creation of the latest RCC some original technical solutions were applied, thanks to which the RK Design School of Russia is rated as the best in the world.

Because of the 90 crisis, the 3М-24Е (X-35E) missile was tested and modified for a long time. But as soon as it appeared on many carriers, it immediately established itself as a universal and effective weapon. As part of military and technical cooperation, the Uran-E ship complex with the 3-24E ASM is supplied to some countries. Naturally, the Russian ships are also arming this complex. Having shown excellent results of state tests, the mobile coastal complex "Bal-E" with such a missile is now being used by the Navy. One of the first complexes has already been sent to protect the Caspian coast. Experts believe that Bal-E has a good export perspective. Already, many countries are receiving bids for its acquisition. The X-35E, the aviation version, has already been tested on some types of aircraft. This rocket is part of the armament of the MiG-29K and MiG-29KUB carrier-based fighters that are being used by the Indian army, namely: the aircraft carrier Vikramaditya (this ship is the improved Admiral Gorshkov).

In the second half of the last century, the effectiveness of RCC systems in a number of military operations was already demonstrated. The most notable moments of the use of PKR are related to the military conflict between the two countries: England and Argentina fought for the Falkland Islands from April to June of 1982. Then the British government sent a large operational force to the South Atlantic, which included two thirds of the Navy's combat strength. The ships were equipped at the time with sophisticated weapons and new technical means. Passed combat training crews in full. But the Argentine Air Forces still sank the English container ship Atlantic Conveyor and the destroyer Sheffield with their Exocet AM.39 missiles. The war ended with the victory of Great Britain.

In February 1983 of the year and until mid-summer of the 1984 of the year, during the fighting between Iran and Iraq, it was recorded that 112 had hit Iraqi anti-ship missiles in ships once. In 60% of cases, the attacked targets were either badly damaged or sunk.

In the past ten years, anti-ship missiles have not been used in military clashes. But this does not mean that they ceased to be a formidable and powerful weapon. Experts are wondering what are the prospects for the development of PKR in the near future? Since the collapse of the USSR and the end of the Cold War, there has been a continuous review of military and maritime doctrines by leading powers. Of great interest are some points in the US naval strategy, according to which, instead of battles in the ocean and sea areas against enemy fleets, that is, “war at sea”, emphasis is placed on “war from the sea”. In other words, in possible offshore operations, goals change. Now they become boats and enemy ships in coastal waters. Objects that are on the beach. Objects that are located deep in the territories and that need to be attacked from the sea. Littoral warships have already been created in the United States, which are intended for military operations in coastal zones.

They can not but reflect on the re-equipment and development of weapons, including anti-ship missiles, the military-political situation in the world. It can be said that CRPs are transformed from a means of struggle on water into weapons for struggle in coastal and coastal zones. The latest domestic and foreign RCC designs confirm this point. They are able to successfully deliver accurate strikes not only on targets located in the open sea, but also on ships and coastal objects located in harbors, including those remote from the coast. Such rockets are usually equipped with satellite navigation systems.

For example, in this direction, a family of Exocet-type rockets is being developed, in which an improved version of Block III is modified specifically for firing at coastal targets. The latest developments of the Harpoon Block II Plus missiles provide software support that not only controls the flight path at a low altitude, but also allows you to go around the terrain. Harpoon Block III is equipped with tools that recognize targets.

Today it is safe to say that a new class of sea missiles has appeared, which, unlike anti-ship missiles, can hit any targets, and not just naval ones. One of the first samples of this class are Russian 3М-14Е (ТЭ) missiles. For exact defeats of the purposes on the coast the rocket is equipped with the warhead intended for it. The homing head is able to allocate on the surface even weakly visible targets of small size.

It can be said with confidence that the development of CRP by Russian specialists not only does not lag behind the best Western designs, but even surpasses them in the originality of technical solutions.

New aspects of modern military naval strategies greatly increase the importance of mobile coastal universal rocket systems in them. They are capable of inflicting damage on enemy ships, which are in a different stage of an offensive operation, and can also strike airborne troops, objects on the coast, and territories captured by the enemy. Possessing such characteristics as mobility and the ability to “hide” on the ground, coastal missile systems can provide effective protection of coastal areas, without excessively high costs. Such functions are performed by the Bal-E DBK. For the creation of the Bal-E DBK, the specialists who worked in the Tactical Missile Weapons Corporation were awarded state awards by presidential decree.

Currently, the developer of the Russian X-35E type anti-ship missiles (3М-24E) is the domestic Tactical Missile Weapons Corporation. She reports that she is ready for production of the X-35UE — a new missile of this class. It will exceed the prototype in basic tactical and technical characteristics by two or even two and a half times. There is no doubt that the latest version of the national rocket production is used in the new version of the anti-ship missile defense system, and they take into account the features of the development of anti-ship weapons that are characteristic of new models produced by the leading companies in the world.

After analyzing the global trends in the development of PKR, the experts came to the conclusion that now this type of weaponry does not lose its significance. In the near future, his improvements will concern an increase in the number of targets he targets, as well as maximum standardization of his carriers.

It is believed that subsonic rockets have some advantage in operations carried out in the coastal zone. It consists in a smaller visibility, higher than that of supersonic missiles, maneuverability and the presence of a larger amount of ammunition.

For Russia, the development of coastal defense systems also remains relevant. This task can be solved by a sufficient supply of the Bal-E DBK in combination with the Bastion operational coastal tactical complexes (developed based on 3М-55Е) or Club-М (developed on the basis of 3М-54КЕ and 3М-14КЕ) to potentially dangerous coastal areas.
Ctrl Enter

We are in Yandex Zen
Soviet tactical missile system 9K72 "Elbrus"
Missile attack on Europe: myth or reality?
Add a comment
Information
Dear reader, to leave comments on the publication, you must to register.