Ukrainian security forces attacked the militia in the Donetsk airport

October 1 2014
76
The commander of the militia unit with the call sign "Green" reported that they were tasked with clearing the terminal of the Donetsk airport within 24 hours. 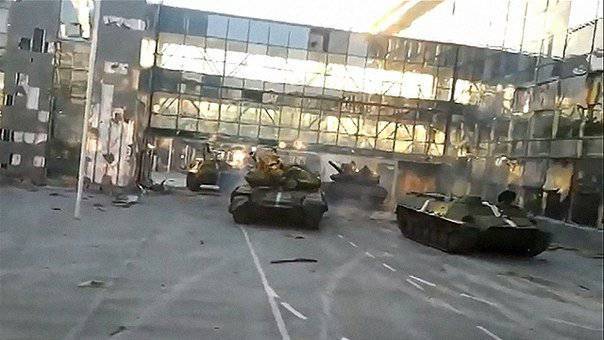 “Artillery has already worked, intelligence has already passed. Now we will knock them out. That's the whole task: to gain a foothold and keep the airport. So that there will be no more villains there, ”the militiaman quotes LifeNews.

“Grads” of the Ukrainian security forces fired on the positions of the DPR militia throughout Tuesday. Moreover, the shells fly to the private sector.

In the battles for the Donetsk airport, one of the heroes of the report died LifeNews - platoon commander with the call sign "Yalta". He and the other fighters of the Somalia battalion-tactical group were shot from an armored troop-carrier when they tried to reach the building of the hotel in the territory of the air port.

"Reports from the militia of Novorossia" note that the DPR army offered Ukrainian security officials to leave the airport, but they refused. Moreover, the Ukrainian media published a message to the colonel of the Armed Forces of Ukraine, who said that in recent days the National Guard has lost a lot of equipment and soldiers.


DNR Prime Minister Alexander Zakharchenko said that the full sweep of the airport will take about 20 hours, but this will have to cancel the cease-fire.

“The airport should not last more than a week. We processed it from what is possible, today we actively used “Weave” (“Rapier” cannons). It is reported that our colleagues from Lugansk are bringing us Hyacinths and other good "as a gift." They smoked them out of the Lugansk airport, we smoked out the bastards with them and from Donetsk, ”one of the militiamen said.