October 1 2014
32
17 September 2014, Russian Prime Minister Dmitry Medvedev held a meeting with the heads of relevant ministries and departments as part of the military-industrial conference held in the Moscow Region entitled “Prospects for the Development of Robotic Systems and Unmanned Aerial Vehicles”. The conference was held from 15 to 17 in September on the territory of a special test range of the military-industrial complex of the Russian Federation - FKP Scientific Research Institute "Geodesy".

The meeting was attended by many Russian ministers, as well as the Deputy Minister of Defense of the Russian Federation, Y. I. Borisov, and the Governor of the Moscow Region, A. Yu. Vorobyov. The main topic raised at the conference were issues that related to the prospects for the development of various robotic systems and systems in Russia. At the conference, participants were able to get acquainted with modern Russian models of various robotized complexes of land, sea (including underwater) and air-based.

The exhibition, which took place in mid-September in the Moscow region, proves that the domestic robotics remains one of the best in the world. In Krasnoarmeysk, on the territory of the landfill of the Research Institute "Geodesy", it was possible to assemble a huge number of various devices that perform the most complex work without direct human participation. At the site were presented unmanned aerial vehicles and those robotic systems that can work even deeply under water. The problems of development of robotics in our country were discussed by representatives of industry, science, as well as all Russian law enforcement agencies. 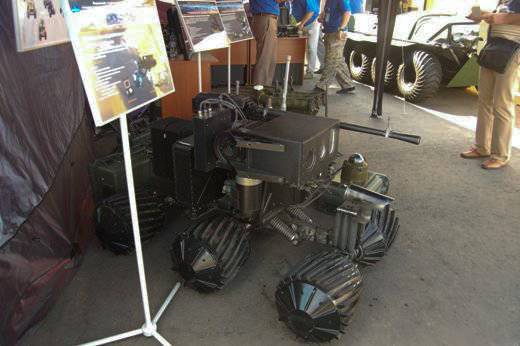 The exhibitors were able to see for themselves and try to assess the level of Russian robotics, jointly develop recommendations for its development. A key role in the organization of this scientific forum was played by the Fund for Advanced Studies, which was established on the initiative of Deputy Prime Minister Dmitry Rogozin. The conference in the Moscow region once again showed that the Russian Federation in all areas of robotics has very good development prospects that are not elusive, but quite realizable. At the same time, they have not forgotten how to create robots in Russia, approaching this issue quite creatively.

The exhibition demonstrated a huge number of ground-based robotic complexes, which were represented by devices for audiovisual intelligence of the environment, decontamination of explosive devices, extinguishing fires, as well as conducting active reconnaissance and combat work. Among other products, the remote-controlled reconnaissance and strike platform created at the State Research Institute for Applied Problems was particularly notable. Externally, this platform was more like a rover or lunar rover, designed to move on the surface of other planets. This thought was suggested by peculiar wheels of the model. However, in fact it is a real combat vehicle for land use.

His history an enterprise from St. Petersburg leads from 18 May 1989 of the year. In February 1999, the institute was transferred to the State Technical Commission under the President of the Russian Federation (starting from 2004, the Federal Service for Technical and Export Control of the Russian Federation). From 2000, the institute officially became known as the Federal State Unitary Enterprise “GosNIIPP” - the Federal State Unitary Enterprise “State Research Institute for Applied Problems”. One of its activities is the development and production of military equipment and weapons. 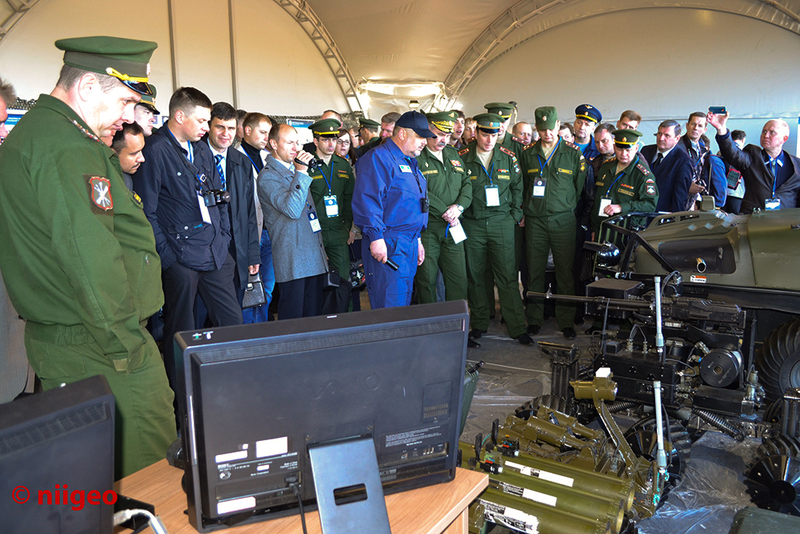 The land drone presented by the specialists of this enterprise is intended for solving problems of reconnaissance of the area. In addition, he can carry out the defeat of manpower and various objects of the enemy. Against enemy infantry, he can use a PKT machine gun of the caliber 7,62 mm, as well as the RSHG-2 (jet-assault grenades). If a RPG-26 rocket-propelled grenade launcher is installed on its chassis, the robotic chassis has the ability to hit even heavier targets, even well-protected by armor. Having found an armored personnel carrier or even an enemy tank on the battlefield, the device operator can take the robot to the required distance, and then launch a volley into the most vulnerable area of ​​the enemy vehicles.

The weight of the presented platform is only 248 kg. It can work continuously for 3 hours or standby for up to 72 hours. According to the manufacturers, the maximum speed of the controlled reconnaissance and shock platform is 5 km / h, the power reserve is 6 kilometers. At the same time, the distance of the remote control of the device is 1 kilometer, using wired communication - up to 5 kilometers. According to some military experts, in addition to military objectives, the chassis of the presented ground robot can also be used in civilian missions and even in the implementation of space exploration programs.

Currently, a lot of attention is paid to the development of robotics in Russia. In 2014, a special laboratory of combat robotics was created in the country, the new structure has already successfully begun work. Oleg Bochkarev, deputy chairman of the Military-Industrial Commission under the Russian government, told journalists about this in May. According to him, the laboratory created was headed by Oleg Martyanov. 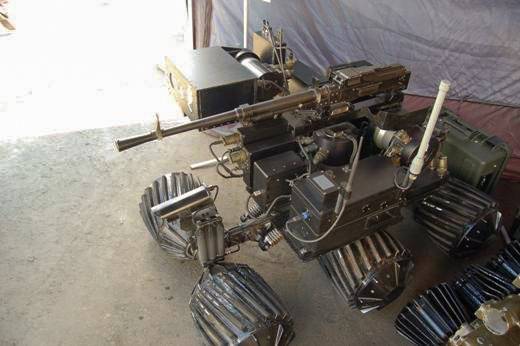 Earlier, Deputy Prime Minister Dmitry Rogozin spoke about creating such a laboratory. The new institution was planned to deploy on the basis of the plant. Degtyarev. According to him, the laboratory is necessary for conducting various experiments, creating samples and conducting tests. At present, the development of promising robotic systems and complexes in Russia is being carried out in the interests of the RF Ministry of Defense in the framework of the current state armaments program for the 2011-2020 years.