October 1 2014
39
Protests in Chinese Hong Kong over the weekend led to clashes with the police and arrests. The local authorities hope that they will be able to achieve the end of the "occupy" in a peaceful way, without resorting to the help of the army - but in any case, the protests will further complicate relations between China and the United States. In Beijing, Americans are directly accused of instructing protest organizers.

On Monday in Hong Kong, classes in schools located in the city center were canceled after protest actions that started at a local university at the beginning of last week spilled out into the business center area on weekends. Several thousand people, mostly students, gathered on September 27 near the building of the Hong Kong administration under the slogan "We need real democracy and general elections." Hundreds of demonstrators entered the administration building, while the rest tried to block the work of the business center of the city - the Central district.

“Occupy Central” began - with clashes with the police (in which about 30 demonstrators and policemen were injured), detentions (not too large - only a few dozen people were detained, including one of the leaders of the students, Joshua Vaughn, most were soon released), tear gas and batons. The Air Force reported that the protests allegedly spread throughout the city - “in many places spontaneous barricades began to arise, about three thousand people were able to block the main road that runs through the bay in Mong Kok, more than a thousand people began to confront the special forces police in busy shopping area, which is located in central Hong Kong. ” Reuters talks about 80 to thousands of protestors, the Chinese media about a few thousand, and in the photos it can be seen that on the patch near the administration there will physically not contain more than ten thousand. On Wednesday, the opposition appointed an action of civil disobedience - but the authorities hope to calm the protesters.

The head of the Hong Kong administration, Liang Zhening, called on the organizers of the Occupy Central movement to “stop this action” on the basis of common interests ”and“ peacefully disperse as soon as possible ”, stressing that“ for a long time the stable development of Hong Kong was based on respect and respect by residents of the law. " In addition, Liang said that "in the past few hours, a version was circulated about the use of PLA forces and the opening of fire by the police, which has no basis," and urged residents to "keep cool and not believe lies." Representatives of the central Chinese government in Hong Kong supported the actions of the regional government and expressed "confidence that the wide layers of the Syanggan population would not bring law and order, peace and prosperity in the area to the sacrifice of the radical activities of several individuals." What do the protesters want?

The topic of electoral law reform has been haunting Hong Kongers for more than ten years now - but this summer it has reached a new level. In the summer of Hong Kong, an independent online survey was held, in which 800 thousands of people from seven million local residents took part - they were in favor of the first direct elections of the head of the region coming in 2017, without any filters.

Now the opposition wants to achieve not just direct elections - the central government has already agreed to this a long time ago, it wants to remove the filter through which the candidates will pass. Beijing will not do this - there is already a corresponding decision of the Chinese parliament. The logic of the PRC authorities is clear - China is interested in the gradual integration of Hong Kong into a single political system, and not in the deepening of differences. The point is not that in Beijing they strongly fear the victory of an objectionable candidate or, even worse, a separatist - according to all polls this is unrealistic, but there they don’t fundamentally want to weaken the already rather formal control over the internal structure of this territory that has not yet fully returned to its homeland.

Hong Kong was returned by Britain to China only in 1997, after a century and a half of colonial status. At the same time, Hong Kong received a guarantee from the Beijing 50-year transition period on the principle of "one country - two systems". It was important for both Hong Kong and the Chinese government - the city is the largest financial center in Asia and one of the world's financial capitals. After the return of Xiangang, the next, far from being the first stories, the gathering of Chinese lands was almost over - now only Taiwan remains, which Beijing intends to return by peaceful means. But in order to convince Taiwanese of the need for and the possibility of a peaceful reunion with their homeland, the Chinese authorities need to conduct the reintegration process with Hong Kong as carefully and gently as possible. 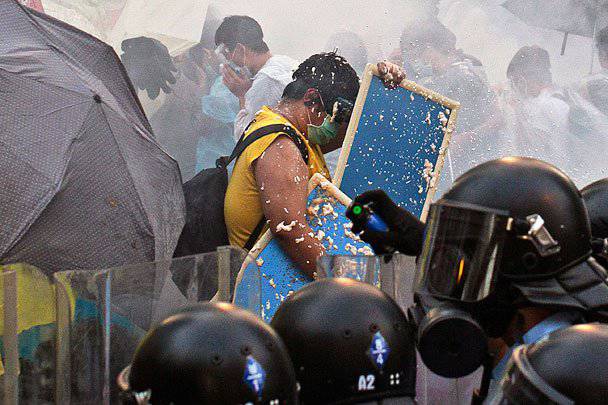 All this cannot please the main opponent of China on the world stage — the USA. Containment of China in the Pacific region is America’s main strategic task - and Washington is going to carry out this policy not only inflating fear of China among its neighbors of the Middle Kingdom, but also using China’s internal pain points. Along with the attempt to play the national-religious card with minorities - the Muslim in Xinjiang and the Buddhist in Tibet - Hong Kong is also given a lot of attention. For this, there are staffing opportunities - after all, in one and a half centuries of the Anglo-Saxon domination of the Hong Kong Chinese, a special outlook was formed - and the geopolitical one.

In essence, Hong Kong is becoming a new global financial center. The very fact of its transfer to China meant the transfer of the center of gravity of globalization to Asia - while the Anglo-Saxon "game masters" not only relied on China, but also hoped that Hong Kong would become an important tool, if not to tame the Chinese dragon, then at least to create with it some kind of "common cause", "partnership for managing the world." China did not give, and could not give any promise to be an obedient tool of globalizers - but at least in the Hong Kong situation he showed that he was ready to take their interests into account.

Now China has almost reached its main goal - it has essentially become the first economy in the world and is beginning to emerge from the shadow of foreign policy, articulating its interests and goals more clearly and clearly. Moreover, he openly rejects the proposed US division of the world for two - the idea of ​​the "big two" was rejected by Xi Jinping immediately after his election as chairman of the PRC two years ago. The conflict between Russia and the West not only demonstrated that Moscow and Beijing came closer together much more than it seemed to the Anglo-Saxons, but also led the struggle to change the world order to a completely different level.

Russia has actually challenged the United States, but has not yet voiced in a tough form all its claims to the "owners of the game." And if she does this together with China, all Anglo-Saxon’s calculations for peaceful coexistence with the dragon taking off (as long as they failed to build a layered defense against him) can finally be written off into the archive, and the collapse of the “American-style world” will accelerate. Under these conditions, China is trying, if not to knock off the course, then at least to divert to other topics - and Hong Kong is one of the best points for this.

But in Beijing they understand perfectly well with whom and what game they play. A week ago, an article appeared in the Chinese newspaper “Huanqiu Shibao” that American intelligence agencies were trying to transfer the successful experience of the “color revolutions” in Eastern Europe to Hong Kong. The submission notes that the leaders of the Occupy Central protest movement held training seminars at the Hong Kong-American Center, a non-profit organization designed to “promote better understanding between Chinese and Americans.”

The events held in this institution, which were attended by, among others, employees of the US Consulate General, demanded that student activists “promote democratic change”, promising support from Washington, including the opportunity to study and live in America. “During the seminars, some international experts taught them tactics of protest actions, strategies for negotiating with the authorities in the context of large-scale popular speeches, and singled out items from the list of political demands that should never be refused,” Huangyu Shibao informed, citing representatives administration of hong kong.

The newspaper calls the head of Morton Holbrooke’s Hong Kong-American center a “major spy” who has worked in the American intelligence structures for 30 for years - he, like Hong Kong media mogul Jimmy Lai, who sponsors the opposition, is close to former US Secretary of Defense Paul Wolfowitz.

In any case, Beijing will not allow the development of the situation in Hong Kong to follow the “color revolution” scenario. And, most likely, he will be able to do this without involving army units, because the majority of Hong Kong residents are not inclined to revolt against the central government. But the main result of the unrest will undoubtedly be that China-US relations will become even more tense - and Russia and China will come together in a common struggle for a new, just world order.