"Just shot in the head" 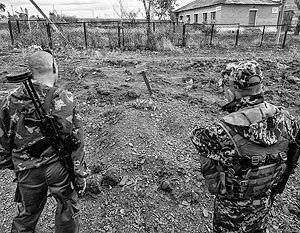 “It was possible to talk with the mother of a dead guy who was shot. His fault was that he brought food to the roadblocks for the militia, ”said Estonian human rights activist Dmitry Linter to the VZGLYAD newspaper. On the eve of the leaders of several non-governmental organizations, he visited the mass graves in the Donbass.

On the eve, the leaders of several European non-governmental organizations visited the sites for the discovery of graves in the Donbas. They examined the graves on the territory of the Kommunar mine, as well as in other places. They were shown photographs taken directly on the bodies of the dead. Human rights activists met with representatives of the executive power and law enforcement agencies of the Donetsk People's Republic and talked with the relatives of the victims.

On Monday, near Donetsk, another mass grave was found in the village of Nizhnyaya Krynka. Experts removed the body of a man killed, according to preliminary estimates, in the tenth of April. According to representatives of the militia, during this period, the Lower Krynka was occupied by Ukrainian security forces.

In a joint statement at the end of the trip, human rights activists "strongly condemned the revealed facts of the most severe reprisals against people, the crudest violation of the norms of international humanitarian law." They appealed to the UN High Commissioner for Human Rights Zeid Raad Al-Hussein, Council of Europe Commissioner for Human Rights Nils Muiznieks, OSCE Secretary General Lamberto Zannier, international human rights organizations, foreign media called “to initiate an urgent investigation into the discovered burials near Donetsk, which must be promptly conducted by an independent international commission, impartially and objectively. ”

About what the human rights activists saw and what the local residents are talking about, one of the participants of the trip, Dmitry Linter, a member of the Russian Alliance of Estonian NGOs, told the VIEW VIEW.

VIEW: Dmitry Sergeevich, from whom did you receive the invitation and why did you decide to visit the burial sites?

Dmitry Linter: I was invited by representatives of not official authorities, but people who write about what is happening. Accordingly, we have written off with our other colleagues who are engaged in human rights activities. For them, as for me, it was the first war. For the first time, we saw what war is in the truest sense of the word.

I am not talking about the legal, but about the emotional aspect. When you see the destroyed houses of civilians, absolutely sane people, collected, doing their job well, working, you talk to them and understand that this person was killed by the closest son, father, husband, very emotionally distracted. Immediately penetrate. It would be desirable not just to support people who have suffered from the insane actions of the Ukrainian armed forces, who have taken an absolutely terrorist position — destroy the infrastructure, destroy the civilian population simply in order to make them afraid. This is very amazing. This is a bright emotional moment.

VIEW: What of what you heard most shocked you?

D. L .: I was told history, as the veterans of the Great Patriotic War simply took away the awards. These awards were then found by the militia from those whom they took prisoner. In one of the villages, a woman told that they were approached by representatives of the armed forces of Ukraine, the National Guard. They ordered hands to be shown. Seeing the rings, the military demanded to remove them. Young girls were hid in basements, somewhere they were taken away, so that, God forbid, they did not catch the eye of the Ukrainian military. Girls could hide in cellars for months in order not to get caught by these bastards. This is not a very human rights term, but I cannot find another word.

It is incomprehensible to me how, being in an officer's uniform, wearing epaulets, being a representative of the armed forces, behave so in relation to, as they say, to their own population. If we move away from emotional assessments and talk about the legal aspect, it is not clear on what grounds the so-called anti-terrorist operation is carried out. What is this term in relation to the civilian population, and why has the Ukrainian authorities not yet begun detaining those people who are involved in these massacres, the fact of which is practically established?

VIEW: How many graves did you have time to examine?

D. L .: I was at three mass graves. Tel is no longer there. There are flowers. We talked to the investigators who run these cases. We were called different numbers. Four people are buried in one, two in the other, and over a dozen people in the third. Investigations are ongoing.

We are talking about dozens of such cases. They shot those who were involved in the militia or sympathized with it.

VIEW: Why is Kiev still not taking any action?

D. L .: Obviously, the Ukrainian authorities share these terrorist methods, or they do not want to notice these crimes of their own armed forces.

VIEW: Did you communicate with the locals? Who was able to talk?

D.L.: It was possible to talk with the mother of a dead guy who was shot. His fault was that he brought food to the militia at the checkpoint. One of the people told the National Guard under this - it was the 25-I airborne assault division from Dnepropetrovsk. There is a question on these paratroopers who destroy civilians. They grabbed this guy, took him away, tortured him. He was tied up and simply shot in the back of the head for expressing sympathy and bringing food.

VIEW: Who should conduct an investigation of such cases?

D. L .: The investigation should be conducted not only by human rights activists. Human rights activists should do this, we should raise this wave, we should transfer our conversations with the victims. This mother, who buried her son yesterday (after being identified), held out with great dignity. She came and talked to us. The pain in her words is a strong emotional shock. The most amazing thing is that when you ask: “What will happen next?” - they say: “No, we will not be with this country, we want to be independent, and we will never accept the fact that they are killing our loved ones, that mass executions of people who do not agree with the political position of the government that is now in Kiev. ”

VIEW: A statement on the results of the trip states that according to the results of the investigation, everything must be done to bring the perpetrators to criminal responsibility under international law. Who should answer for their actions?

It is already obvious that this silent solidarity to cover these crimes is a political position. We need to see how the law enforcement agencies of Ukraine will act in the future in relation to people who have committed these crimes. If this is not done, it means that the political will of the Ukrainian leadership is to hide these people and these crimes.

VIEW: What actions do you expect from the Ukrainian authorities?

D. L .: I guess they will want to turn away from these crimes, but accusing the other side. It is obvious that it is difficult to explain to relatives that their native people were killed not by the national guardsmen or paratroopers who had been in the area for several months, but by some militiamen. It is clear that it is not. These mass executions, torture of people whose graves we saw should be fully investigated. And if the Ukrainian side, as I understand it, does not intend to investigate these crimes, which emotionally can only be called fascism, then it is obvious that the political leadership is in solidarity with criminal offenses against humanity against the inhabitants of Novorossia. Obviously, they should be responsible for this further.

VIEW: PACE President Anne Brassere believes that before making any statements on such serious accusations, it is necessary to have all the possible facts. Are there enough facts?

D.L.: I lived for a long time in Europe, communicated in different European structures and understand what is being said. Europeans need to save face. The fact of a crime is obvious. The actions aimed at the destruction of the civilian population during the occupation are obvious. The fact that torture was used is obvious. Do PACE members want to learn these facts? Nobody forbids them to come. I am more than confident that they will be able to provide security and the opportunity to be present in those places that are destroyed by shells or intentionally destroyed by Ukrainian troops.

I saw a destroyed bridge. This is the deliberate destruction of infrastructure only so that later it would be possible to cause maximum damage to the local residents. In any case, no one bothers the Europeans to join. On the contrary, everyone would be happy if the representatives of this esteemed organization wanted to really study the facts, and not just make statements.

VIEW: Why does Europe take this position?

D. L .: European politics vibrates with every American sigh. It will not change until there is a team from Washington.

It is necessary to pay attention to the fact that European politicians gave carte blanche to the new regime in Kiev for the accomplishment of illegal actions. Maidan was also an anti-constitutional act aimed at overthrowing the government. Some people simply decided that they were entitled to determine policies throughout Ukraine, for the entire 48-million population. Accordingly, they are faced with the fact that some regions directly disagree and are ready for confrontation. This is a conflict not with elite groups, but with residents of the regions. Accordingly, all this time, Europe pretended that these problems do not exist. When the account of the victims went to tens of thousands, when mass graves of dead people are discovered, they quietly begin to show that something needs to be done with this attitude.
This is an ambiguous position that nothing happens and everything is fine. This cannot go unnoticed, and, of course, in the European establishment, in the European media penetrates the truth about the crimes committed by the Ukrainian armed forces. This forces the European political elites to react in a certain way. But they do not want to admit that they are wrong, so they are trying to drag out time, to somehow justify themselves, to delay the political decision-making process.

It seems to me that if the Ukrainian leadership does not initiate criminal proceedings against those guilty of crimes on the territory of Novorossia, it is obvious that it is in solidarity with these crimes. Accordingly, Europeans need to understand who they are dealing with. Well, if Europeans cover, then it is clear what political goals they pursue. It seems to me that the European leadership should look less at the United States, and deal with its own sovereignty and national interests.