Under the Donetsk found a new mass grave. OSCE does not exclude trafficking in human organs

30 September 2014
39
Under Donetsk in the village of Nizhnyaya Krynka another burial was discovered. So far removed one body. This is a man, allegedly a militiaman, who died in April, when the village was occupied by Ukrainian security forces. Reports about it RIA News. 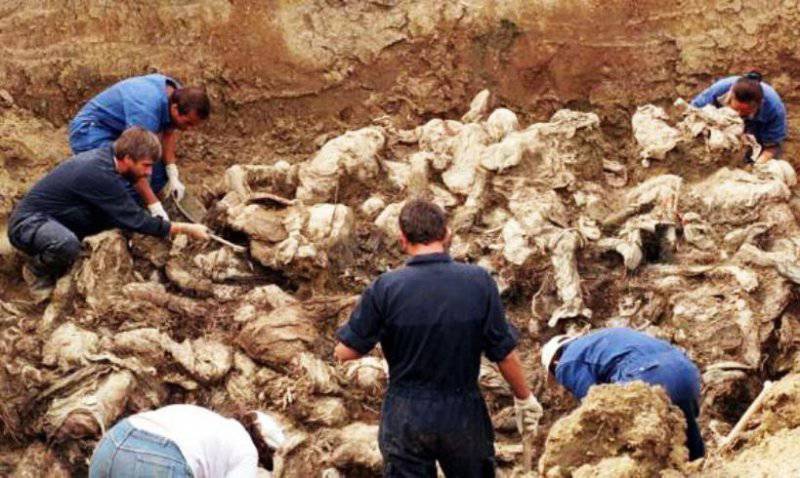 According to preliminary data, the time of death of a man coincides with the time of the death of other citizens whose bodies were found earlier.

According to OSCE Special Representative for the Fight against Trafficking in Persons Madina Dzharbusynova, the existing evidence that the bodies removed from the graves were without viscera can speak about trafficking in human organs.

“Last week, at a meeting of the OSCE on the implementation of human rights obligations, a statement was made by a representative of a non-governmental organization that allegedly burials had been found in eastern Ukraine, where, according to evidence, the bodies were left without internal organs. That is, the question was raised that there is such a trade in organs. But at the same meeting it was announced that the observers of the OSCE mission would thoroughly investigate the information and should not be politicized. It is necessary to study with the involvement of international experts, Ukrainian experts said that they themselves are interested in giving answers to these questions, ”Dzharbusynova said in an interview to 112 Ukraine.

Yesterday, international observers examined the burial sites. The information that the overwhelming majority of those killed were civilians was confirmed.

“Now in the morgues of Donetsk and nearby cities there are 400 bodies on identification. 350 of them are civilians. Many are in such a state that it is simply impossible to identify them, ”reports the Deputy Prime Minister of the DPR, Andrey Purgin, LifeNews.

“All the bodies were found in different places, which are now under the control of the militia, but were previously controlled by the Ukrainian security forces,” said Purgin. According to him, the DPR government intends to seek help from Russian specialists so that they can carry out a genetic examination and identify the dead.

As for the number of people buried in the “execution graves”, it may increase significantly over time. Nobody can give guarantees that the same cannot happen in the other territories occupied by the junta.

“It is worth noting that the fascists not only torture and kill peaceful citizens of Novorossiya, but also force them to work for the good of the junta. In order to build fortifications and defensive lines, in the possible directions of the beginning of battles, the security forces of the Armed Forces of Ukraine catch people. After being accused of sympathizing with the militias and lacking loyalty to Kiev, the fascists force them to dig trenches and build defensive lines, ”the information site says. Novorosii agencies.

OSCE expert group member Einars Graudins (Latvia) who visited the New Krynka told a journalist Navigator:
“After everything I have seen, I can make an unequivocal conclusion that in the territories occupied by the paramilitarist formations of the Kiev authorities, mass executions of captured militiamen take place, that is, there is non-conventional waging of war, as well as extrajudicial killings of civilians”.

“Based on international law, this can be interpreted as a war crime, as genocide against one’s own people.” This happened in Rwanda, in Yugoslavia, and those responsible should be found and punished. They must be brought before an international tribunal. I want to especially note that war crimes do not have a statute of limitations, ”the expert said.