How is the recent history of "Great Romania" 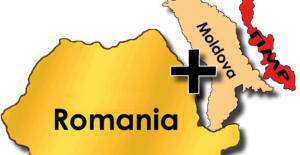 Romanian Prime Minister Victor Ponta said recently that no later than 2018 of the year “the second great unification of Romania” could be accomplished. Ponta is the man who decided to change Traian Basescu as president. Recall the elections in the country will be held soon - November 2, and the powers of the current head of state will expire on December 21. As for Mr. Basescu, he is promoting the idea of ​​merging the “divided people” with the 2006 of the year.

The current President of Romania, Mr. Basescu, has already served two five-year terms on the Romanian throne. If Victor Ponta replaces him, the foreign policy relating to the “merger” of the two countries can move from the field of propaganda into the sphere of practice.

Victor Ponta has every chance of being elected. According to opinion polls, the prime minister, supported by the ruling center-left coalition, is an undoubted favorite of the election campaign. His competitors are weak - the mayor of Sibiu, Klaus Johannis, the nominee of the National Liberal Party, and the former Minister of Tourism, Elena Udrya, who was nominated by the right-wing parties. The third competitor is Theodore Meleshkanu, director of foreign intelligence services, whom the Social Democratic Party has blessed. However, he took part in the election race too late, and he has no chance to win. May prevent him and age (73 year).

What can be noted on a post of the president in case of a victory Victor Ponta?

At the pre-election speeches, he is applauded for the theses on making the dream of creating “Great Romania” a reality. The most loud statement by the presidential candidate was made on September 14 at a meeting with an activist of the Romanian Social Democratic Party in the city of Alba Iulia. He said bluntly that Moldova will become part of the Romanian territory, writes "Moscow Komsomol".

This statement outraged the Russian Ministry of Foreign Affairs. “From the candid appeals of the presidential candidate Romania to“ make the second great union by 2018 ”, it clearly follows that certain political circles in Bucharest still feed the annexationist plans in relation to the neighboring sovereign neutral country,” the agency’s website said.

Surprisingly, the opinion of the Moldovans is of little interest to Victor Ponto and his supporters. They consider them Romanians - and the point. However, the Moldovans do not intend to lose their statehood. And many in Chisinau believe that we are talking only about absurd electoral propaganda, and they will not get to the point. "Uniri" will not take place in the same way as it did not take place at Basescu.

In fact, neither Basescu nor the Ponte do not care about the population of Moldova. But here it is a matter of foreign territories, which the “great” rulers consider their own.

“However, now it’s not even the case that Romanian politicians are trying to conquer their electorate through proposals for annexing a foreign country. And it’s not about the fact that no more than 10% of Moldovans wanted to unite with the “mother of Romania” even in the best times for unionism. And about the strange feeling that all this ostentatious Europeanization of Romania, tolerance and culture is only a disguise. But in fact, Romanian politicians have never lost hope of getting Moldova again. Bessarabia, as they call it, having in mind, of course, is not at all the romance of the time of Pushkin, but the status of Moldova in Romania from 1918 to 1940 years. And from 1941 to 1944, when the Romanians, side by side with the Nazis, established the “Millennial Reich”, and “everything is permitted”. Most elderly people say that they still remember the signs on the Chisinau trams: “Speak Romanian!” Like the contempt with which the Romanian authorities treated the population of the newly acquired territories, especially the Moldovans, who for them were “myrlans” - spoiled by the Romanians. And this persistence and immutability of the desires of the Romanian political elite, be it in the European Union or in the allies of Nazi Germany, are the most frightening today. ”

Basescu's propaganda was built on a clear thesis about the “divided people.” Through the introduction of unambiguous slogans about “reunification” into the masses, the crowd learns that the newest history countries should be rewritten. The lack of education, the elementary ignorance of history, and therefore the super-easy accessibility of the masses to manipulators always leads to the fact that the most ridiculous ideas find a huge number of supporters. So it was with the political sermons of Basescu, who, since 2006, had constantly reiterated about the “divided people” - and even about such people who (the only one in Europe) remained on opposite sides of the pillars: “Romania and Romanians are the only country, the only people who divided into Europe after the reunification of Germany ... ”The mention of Germany in this context looks really terrifying. Especially considering that the overwhelming majority of Moldovans are not ready to become Romanians. By the way, Basescu said about the mentioned reunion not to the Romanians, but to the Moldovan schoolchildren who won the Olympics on the history of Romania (July 2006).

Artyom Kobzev ("Lenta.ru") recalls that in 2013, a sociological survey of public opinion was conducted in Romania at the request of the newspaper Аdevarul in Romania. 61,7% of respondents answered “yes” to the question “If the European integration of Moldova were impossible, would you agree to the unification of Moldova with Romania?” Moreover, 44% of respondents reported that at least once they saw “Bessarabia” in public places in Romania. - Romanian land "or" Bessarabia is Romania. "

In early 2014, the Romanian Agency News Mediafax has launched an online study. The audience was asked a simple question: “Do you agree with the unification of Romania and Moldova?” 68,2% of the participants voted in favor.

All this is called in the language of sociologists "positive dynamics." The number of supporters of the merger is growing. Moreover, we note again, it grows only on one side of the border.

Not for nothing on the eve of the New Year, 2014 of the year, Basescu said in his pre-New Year address to the nation: “2014 will be the year in which we declare honestly and openly that Moldova is Romanian land.”

In addition to propaganda and sociological polls, some practical steps are being taken in Romania, supposedly being taken for the benefit of fraternal Moldova. True, then it turns out that this is an ordinary propaganda fiction. Probably associated with loud statements by politicians and the heat of pre-election passions.

on September 29 IA "REGNUM" referring to Agerpres, the Romanian companies Romgaz and Petrom sent to the Moldovan authorities proposals to supply gas to the republic through the Iasi-Ungheni gas pipeline at a price that is 20% lower than the price of Russian gas.

Meanwhile, it was about the volume of about 14 thousand cubic meters. m per hour (approximately 3% of Moldavian needs), which, we add, cannot be of decisive economic importance. Another thing - the political effect.

IA "REGNUM" reminds that Moldova is dependent on Russian gas supplies for all 100%. The Iasi-Ungeni gas pipeline, opened on August 27, could reduce the country's dependence on Gazprom from 100% to 95%.

It is interesting here that the so-called “Romanian gas” could only be received by residents of two regions of Moldova - border ones.

However, gas promises were made before, but there were no supplies and no.

The fact is that, as the agency notes, Romania does not even cover its internal needs from its own sources, importing from Russia from 22% to 42% of the total gas consumption.

"Moscow Komsomol" asked the experts about whether there is a likelihood of Romania joining Moldovan territories.

Vladimir Zharikhin, Deputy Director of the Institute of CIS Countries, responded that all opinion polls indicate that a significant majority of Moldovan citizens do not want to join Romania. And definitely Transnistria and Gagauzia will not join Romania. According to the expert, such political statements are designed for the nationalist circles of Romania and to win the election. Romania has no mechanisms for joining.

The general director of the Center for Political Information, Alexei Mukhin, similarly noted that Romanian politicians in this way “earn political capital for themselves” Today, the Romanian politicians are playing on the moods of nationalist, radical groups, providing themselves with additional support in the elections.

Russia, we add, should consider this.

Even if in any way, from loud propaganda and ending with the distribution of Romanian passports (now a little more than 300, thousands of Moldovans have Romanian citizenship, which they received to find work in the European Union), Bucharest will be able to turn the majority of Moldovans in their favor, and in 2018 will indeed be organized a referendum, then Transnistria and probably Gagauzia will break away from Moldova. There are practically no supporters of the Uniri, and there cannot be. As a result, Transnistria and Gagauzia can hold their referendums and join Russia. Or, at least, to become a state entity and enter the Customs Union. Moldovan politicians who advocate “romanization” should also take this into account.