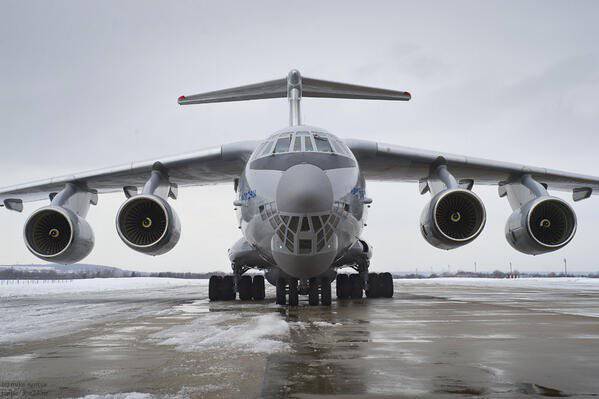 Two years ago, on September 22, 2012, from the Ulyanovsk-Vostochny airfield, a new Russian Il-76MD-90А heavy military transport aircraft flew into the sky. The crew was under the command of test pilot of the Hero of Russia Nikolay Kuimov.

During the first flight, the flight characteristics of a heavy transporter were evaluated. After landing, the crew commander recognized the flight of the aircraft to be stable and manageable, while all the systems worked properly. The first flight lasted about 40 minutes and became an important milestone in the work of OAO Il.

Externally, the new Russian heavy military transport aircraft differs little from its predecessor, the IL-76MD. But the abbreviation MD-90A hides the changes in the designs, which made it possible to reduce weight, the latest electronic filling, economical and low-noise engines, a modern “glass” cabin, which together have significantly improved the characteristics of the machine.

Now the plane takes more cargo (to 60) and flies farther (to 5 000 km). And modern digital flight-navigation equipment, the so-called “glass cabin”, allows to reduce the load on the crew and improve flight safety. On the pilots dashboard there are six multifunctional digital screens that display all the information necessary to control the aircraft. The navigator’s workplace is equipped with a multifunctional indicator that provides a display of navigation information.

Most importantly, all work on the modernization of the aircraft from the beginning of the design to the release of the flight sample was carried out in digital form using modern computer systems. All design and technological documentation for the product was fully converted into electronic form and the aircraft was put into production at the Aviastar-SP enterprise in Ulyanovsk using modern digital technologies.

This work required a great deal of effort from the specialists of the OKB and was carried out under the leadership of Viktor Vladimirovich Livanov, who at that time headed Il OJSC.

October 04, 2012 aircraft IL-76MD-90A, a new military transport aviation, was demonstrated to the President of the Russian Federation Vladimir Vladimirovich Putin. I liked the plane on the same day, at the meeting “On the Formation of a Consolidated Order for Domestic Civil and Transport Aircraft for the Period Until 2020”, the largest history the current Russian aviation industry contract between the Ministry of Defense and JSC UAC - Transport Aircraft for the supply of 39 heavy transport aircraft IL-76MD-90А. The contract value amounted to about 140 billion rubles, the duration of the state order program was calculated to 2020 year.

In 2013, the heavy transport aircraft successfully passed the flight tests of the factory and proceeded to state joint tests under the program of the Ministry of Defense of the Russian Federation at the Flight Test and Development Base of JSC "IL". In the summer, as part of the MAKS-2013, the aircraft was officially presented for the first time to domestic and foreign media.

In July, the 2014 of the year at the enterprise “Spektr-Avia” was painted the first production car. And for the first time, new polyurethane enamels of Russian production developed by the All-Russian Research Institute of Aviation Materials (VIAM) were used for this purpose.

The aircraft received a coloring scheme approved by the Ministry of Defense and its own name "Ulyanovsk". The name of the city and the coat of arms of the Ulyanovsk region were put on the nose of the aircraft.

Currently, the first serial IL-76MD-90А is undergoing ground testing, after which it is planned to begin flight tests.

15 August 2014 of the year at “MATF-2014” the signing of the contract for the supply of the first production aircraft IL-76MD-90А to the Taganrog Aviation Scientific-Technical Complex named after A.G. Gm Beriev ”as a platform for creating an experienced special aircraft A-100.

Currently, more than X-NUMX Il-10MD-76A planes are located in the launch of Aviastar-SP.