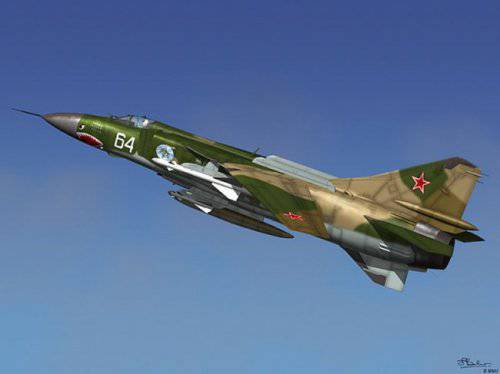 28 May 1987 of the year on Red Square landed a light aircraft, piloted by athlete Matias Rust. It was a shock, a severe blow to the prestige of the country, its army and air defense. However, few people know that just a couple of years later история repeated, but on the other side. The NATO air defense forces “let through” is no longer a light-engined aircraft, but a full-fledged Soviet fighter that reached distant Belgium.

11: 21 (the time hereafter is Moscow time). The MiG-23M fighter, piloted by an 1 class pilot of Colonel Nikolai Skuridin, took off from the military airfield of the 871 fighter Pomeranian Red Banner Aviation Regiment. Taking off in the area of ​​Kołobrzeg in Poland, the aircraft is in full combat readiness, with the “friend-foe” identification system, with an 260 round of ammunition rounds for the on-board 23-mm cannon. However, there were no additional fuel tanks, bombs, or missiles on it.

After 41 a second, Skuridin fixes a decrease in engine speed and cotton in the left air intake. As a result - a sharp drop in thrust and decline. The situation is critical: he turns the car towards the sea, and he catapults himself. The fighters sent in pursuit of the aircraft do not find him, and the MiG is considered to have crashed. But...

After 6 seconds after the ejection (according to the flight recorder, found later at the scene of the accident), the engine began to gain momentum again. The plane slowly gains altitude until it reaches the ceiling in 12 km. Everything works automatically, according to the signals of the on-board electronic system.

11: 44. The air defense radars in West Germany record the violation of the air border by an airplane moving at a speed of 740 km / h.

12:00 p.m. Commanding aviation The Northern Group of Forces Major General Ognev reports to the Air Force command about what happened. He reports that the plane "crashed into the sea and did not cause any damage."

12: 05. The “needles” successfully intercept the intruder and enter into visual contact with him. The pilots report to the dispatcher that they see a fighter with Soviet identification marks, without a pilot and with a torn canopy. They are not recommended to shoot it down, since it is impossible to predict where the plane will fall from such a great height. They continue to accompany.

MiG continued its automatic flight until the full development of fuel, flying a total of about 900 km. After that, the engine stopped him, and the plane began a smooth decline.

12: 37. MiG falls on the territory of Belgium, near the border with France on a residential building of a farm in the village of Belleg. At this time, the house is 19-year-old Wim Delare (Wim Delaere), who died. (Subsequently, the Soviet government would pay his family almost 700 thousand dollars of compensation.) After circling the crash site for some time, F-15 returned to base. 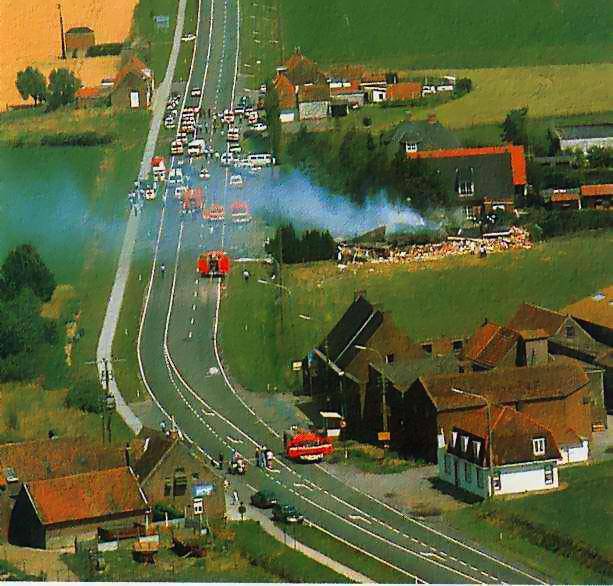 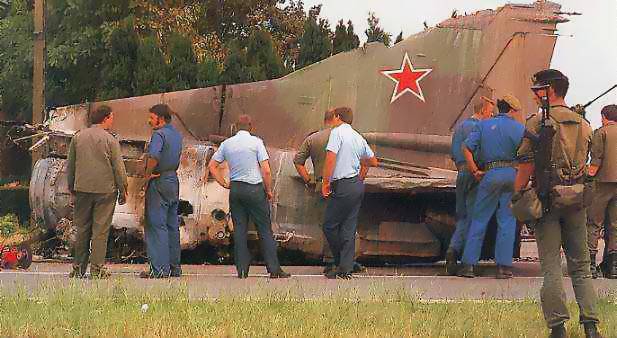 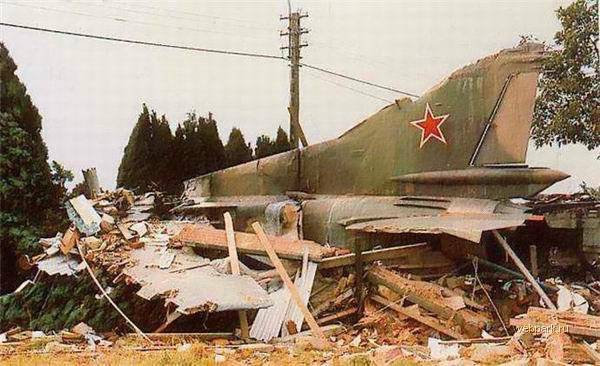 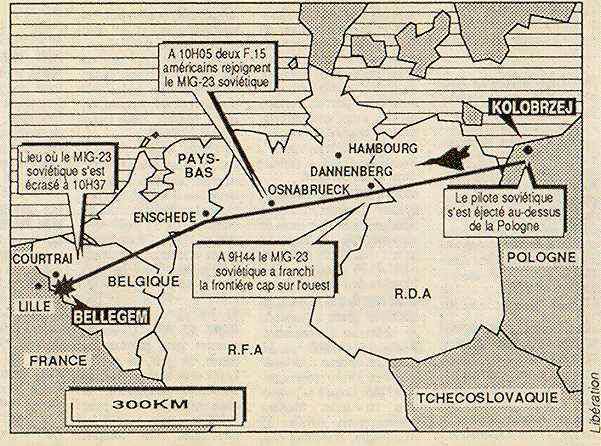 Of course, the most thorough investigation was carried out. It was found that the pilot was not guilty of what had happened - and it is difficult to imagine that during an ordinary flight, an ace who had flown more than 1700 hours by that time could make some kind of incredible mistake. Although there is an opinion that a spontaneous afterburner disconnection occurred, which led to a sharp drop in thrust, which the pilot took for engine failure. The rest of the distance fighter flew in the form of non-propulsion.

Against the background of the “missed” aircraft of Matthias Rust, a lightweight “plywood” Cessna 172B Skyhawk, which was also intercepted by Soviet fighters several times, the MiG incident looks much more serious. However, he did not receive wide publicity either from us or in the West. Soviet specialists were admitted to the crash site, and the wreckage was even taken to the USSR. However, the official reason was not named - although it was established that the engine of this fighter over the last year 5 was sent for repair.

Air Marshal Shaposhnikov subsequently commented on this event: “The incident, according to our data, is unique in the history of military aviation. At least, I do not recall that the car, abandoned by the pilot, made such a far uncontrolled flight. Such a plane is a MiG-23. ” Let us see briefly what kind of aircraft it is.

In short, this is a single multipurpose fighter. For the first time, a variable sweep of the wing was used on it (as in the famous Tu-160 bombers, the heroes of our cult article "White Swans"). According to the same Shaposhnikov, “during takeoff or at low speeds, its wing is almost straight in terms of, with minimal sweep, a decent span. The plane, so to speak, does not break through the air, but really flies. ”

Armament: 23-mm air gun, capable of making up to 3200 rounds per minute (260 ammunition ammunition); medium-range guided missiles (suspended on 2 underwing nodes) and up to 4 melee guided missiles (on 2 sub-body nodes). Equipment and bombs are possible, the total mass of weapons is up to 2 t.

The fighter was put into service in 1969 and served in the domestic Air Force until the middle of the 1990-s, becoming one of the most popular in our military aviation. It was supplied to other countries and participated in the mass of local conflicts.

Modification of the MiG-23M, which made the ill-fated flight, was a significant refinement of the main aircraft. She had increased wing area, improved aerodynamics, enhanced engines, improved on-board radar.

In the USSR Ministry of Defense

July 4 in one of the aviation units of the Northern Group of Forces during a training flight over the territory of the Polish People's Republic due to a malfunction of aircraft at low altitude, the Soviet military pilot was forced to eject from the MiG-23 fighter aircraft. The pilot is alive. The aircraft continued an uncontrolled flight in a westerly direction and fell on Belgian territory. The Soviet side comes into contact with the governments of the states through which this aircraft passed.

What happened to MIG-23?

In this regard, the Deputy Commander-in-Chief of the Air Force, Colonel-General Aviation A. Borsuk told the TASS correspondent: "The plane was piloted by a military pilot of the 1 class Col. N. Skuridin. I spoke with him on the phone. He had already undergone a medical examination after the ejection, recognized as healthy. Pilot experienced. For Colonel Skuridin it was the first flying day after the holidays. As it should be, in order to restore the skills of piloting technology, he first made a test flight on a combat training aircraft In the 11.18 flew independently to work out exercises for aerobatics. On board there was an ammunition load of shells for the 28-millimeter cannon. There was no other ammunition. According to the pilot report, after taking off when the engine was running in the afterburner at 130 meters, he heard in the area of ​​the air intake, I felt a drop in the engine thrust, a drop in the aircraft. I also determined a decrease in engine speed and speed. The pilot reported to the flight manager about engine failure and at an altitude of about 100 meters he ejected.

After the pilot's report, Lieutenant Colonel Balykin observed the afterburner extinguishing and engine smoke, as well as the sinking of the aircraft. After the ejection, the plane stopped descending and disappeared from its field of vision at the extremely low altitude at a distance of 4-6 kilometers. The development of an emergency to take off presumably can be explained as follows: the spontaneous shutdown of the afterburner led to a sharp decrease in thrust, speed, and altitude, and was perceived by the pilot as an engine failure. In the future, the aircraft, being in the “stabilization” position on the engine-free mode of operation of the engine, continued flight until full development of fuel, flying about 900 kilometers. ”

In 12.00, the acting commander of the aviation of the Northern Group of Forces, Major General Aviation V. Ognev, reported to Moscow on the command of the Air Force about a flight incident, that the pilot had been ejected and that measures were being taken to investigate the incident. "And where did the plane fall?" - asked Moscow. "I fell into the sea, but I did not cause any damage." It was meant that he did not please, they say, neither to the ship, nor to the fishing boat.

And after some time, like a bolt from the clear clear sky, the news came about the fall of the Soviet military aircraft in Belgium. According to our correspondent Y. Kharlanov from Brussels, at 10.55 local time, residents of the village of Coygem, located between the Belgian cities of Kortrijk and Tournai, heard the roar of the explosion, and then several more detonations. The witnesses who came running to the place with amazement saw that a plane had crashed onto the farm belonging to the Delare family. From the ruins protruded his tail with the identifying mark of the Soviet air force. At that moment, 18, the owner’s son, Weed Delare, was in the house. He died.

And one more detail. Two American fighters, taking off from Susterberg base in Holland, found and accompanied our MiG at an altitude of more than 10 thousand meters. Seeing that the cockpit is empty, the lantern is reset, both F-15 have retired ...

4 July at 9 hour. 44 min. American observation services spotted the migrating airspace between East and West Germany MiG-23. In 10.05, it was intercepted by two aircraft of the US Air Force, and then the American pilots found that the MiG was flying without a pilot. In such cases, usually give the order to bring down the aircraft, but the flight went over densely populated areas. In the end, at 10.37, the plane crashed into the village of Belleghem near Kortrijk (Belgium), slightly flying to the Belgian-French border, beyond which Lille lay in the immediate vicinity along the course. The big city did not suffer, the whole village did not flare up - a single house was destroyed. But the parents of the young man, whose burnt corpse was found under the ruins of his native home, are no better because there are no more victims. The governments of Belgium and Holland sent a note of protest to the USSR: the Soviet command was obliged to notify about this flight all countries for which the plane could be dangerous.

Despite the tragedy of the incident, the MiG, for the first time "escaping" to the West without a pilot, of course, became for the French the subject of wit. We, in turn, do not rule out that the real MiG was chased at the forefront of propaganda MIGs - Gorbachev’s peace initiatives. And if you stick to the popular concept of conservative forces that threaten Gorbachev, in particular, in the army (where, indeed, they hardly forgot to clean up after another flight, Matthias Rust’s Sesna), then you can also put forward such a semi-fantastic version, according to which the marshals fired MIGs at MIGs, timing the blow at the "pan-European home" to the day when the French Republic met the author of countless peace initiatives.

("Russian Thought" 7 July 1989 of the Year)
Ctrl Enter
Noticed oshЫbku Highlight text and press. Ctrl + Enter
We are
MiG-15 - the best fighter of the Korean WarThe beginning of the First World War: the situation on the border with Austria-Hungary and the Black Sea. Pogrom of belgium
93 comments
Information
Dear reader, to leave comments on the publication, you must to register.