Ukrainians are uttered to the utmost inadequacy 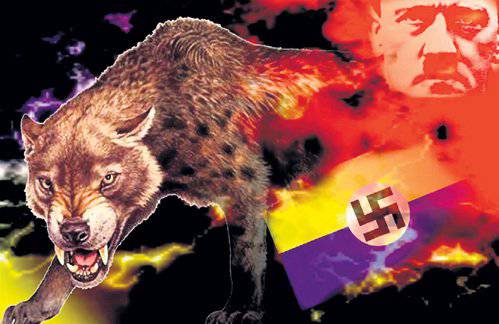 This article is devoted to events in Ukraine, entered the top 50 best texts, published in online magazines last week. Original text can not be found. Only hundreds of nameless copies roam the Internet. And this is understandable - the thoughts expressed in it can offend very many. Millions of people, they seem too harsh and even offensive. We, too, do not share the author’s position by 100 percent, but we still publish this work by an unknown soldier of the information war of good and evil. We hope that for good reason.

Poroshenko is almost doomed. He cannot see the military victory over Novorossia like ears without a mirror, and without this victory he will be torn to pieces ... Oh, those who wish will line up! From the surviving pravosekov, furious "sire of the generals", to finally sbrendivshie maydaunov.

If Poroshenko recognizes a military defeat and stops the operation, pravoseki provolkut him on Bankova for his own guts, wound around his neck. If you do not stop, the militia domolotit remaining ukropskie parts. Fortunately, this is convenient: almost everything that is still capable of driving and shooting in Ukraine is now assembled there in the East. After that, before the militia, the whole of Ukraine will be spread legs in a military sense. That is, without military units capable of seriously protecting it. And then the militia will go to Kiev.

Kiev faced a choice: severe defeat now or catastrophic defeat later. In the best national traditions, we chose both options, hoping to replace luck and brains with obstinacy and cruelty. Thus, Poroshenko does not have a “good” course of action. At all. There are only bad ones.

The only chance left is to drop everything right now, fly to Switzerland and abdicate the throne from there. But you need to still have time to get as far as Boryspil, and in fact the well-wishers whisper to the “Right Sector” as soon as the team passes to prepare the plane.
Does Poroshenko understand this? I think yes. I think the rumors that board No. 1 in Boryspil is kept in constant 100% readiness and that crews are on duty at the airport right there in shifts are explained by this. Thus, the militia will not have to overthrow the Kiev regime: they will do it for it, and before the militia reaches Kiev. Even moving as much as possible for tanks speed.

It looks like the alignment of Kiev. And from Moscow?
I think Moscow is aware of the mood in Ukraine. Therefore, I believe, Moscow asked itself a question: if we break the Ukropskaya army with the hands of the militia and take Kiev, what will we do next?

What do we do with the Mother of Russian cities with a contagious whore with a Svidomo?
After all, the population of Ukraine is utterly inadequate. It burns with hatred towards Russia. It really thinks that in Europe it is waiting for 10 000 euro salaries and 5 000 pensions, and only evil Putin does not allow them to receive them right now. Only evil Putin does not allow them to move out of the panel five-story building in the apartments of the Cote d'Azur. It really thinks that the ATO is victorious and “the separators are left a little bit”.

Therefore, in the event of the seizure of Central Ukraine, the Kremlin will receive nothing but twenty million two-legged shit. Shit overexcited, retarded and aggressive. Shit, for twenty-three years accustomed to treat the state as a condom. That is - very "valuable" as subjects.
Having suffered defeat in open battles, the Ukrainians will pass to guerrilla terror. In the backs of the militia will continuously fly bullets and "Molotovs" - in Kiev, in Zhytomyr, in Poltava ... They will fly under the slopes of the train.

Extinguish this gateway hohlyatskuyu rage cash infusion is impossible. No matter how much Russia has invested in these territories, no matter how much it builds up social programs and all military destruction, no matter how much the Khokhlov raise pensions and salaries, it will not help. Because of the deformity of their national psychology, the Khokhlov will always be few. But the Russians' discontent - “after all, we again feed this bastard ?!” - will be quite real.

But it is impossible not only that. There, in Central and Western Ukraine, denazification on the German model is impossible. When in 1945, the Americans and Russians began to arrange for the Germans to make excursions to concentration camps, to poke their faces into the local attractions, to force them to show their chronicles in cinemas — the Germans were shocked. Many were crying. Some fainted. But when the Khokhlov show footage of Odessa residents burned alive, the bodies of women and children of Donbass torn to pieces, they do not faint. They gnaw. They shout: “So wadding and right! Glory to Ukraine! Hero fame! .. "The Germans were horrified by the atrocities of their compatriots, they only excite Ukrainians. Thus, it is impossible to buy the loyalty of Bandera biomass. It is impossible to "re-educate" her.

What the great Sun Tzu prescribes is: to clearly distinguish between the desired and the possible. To recognize the impossibility of the impossible and not to try to achieve it. With regard to Ukraine, this means - to recognize that Central Ukraine and Kiev are lost to the Russian world. In the foreseeable future, in any case. 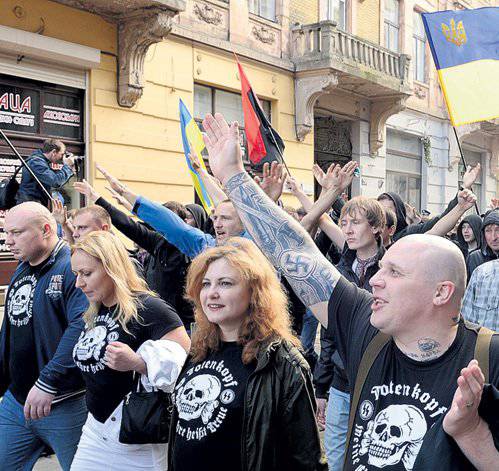 Reject meaningless slogans-chimeras like "we need a united pro-Russian Ukraine." There is as much sense in them as in the “single pro-Russian Alpha Centauri”. Because of the years we lost 23, the lost Pro-Bandera generation has grown there, and one must either be ready to physically get rid of this generation - having the will and opportunity - or accept the reality of its existence. And think how to minimize the consequences.

It is also necessary to discard the idea of ​​a chimera about “balancing the Bandera regions with the pro-Russian ones”. Not only because the Russian-speaking regions will not live in the same state with those who bombed them, burned and shot, grunting with pleasure. But also because the Banderov passionaries do not objectively “balance”. If you try to “balance” a plate of shit with a plate of jam and mix them, you will get two plates of shit and no “balance”.

Same with bandervoy. Defeated in open battle, and even in the guerrilla guerrilla, they make up for the loss in the spiritual "guerilla". Let's give them their due: they have proven that they are able to effectively embrace young people in Nebander's regions. Because Bandera worldview is just like any fascism. It responds at once to all questions of being in a form accessible to any down. Why do you get two hundred dollars, why do you wash other people's toilets, why you live in a panel five-story building, why you don't have a “Lamborgini” ... That is what the Muscovites have on the suite. Chomu axis!

Leave the Russian-speaking regions for another generation in the same state with Bandera - and they no longer need to import Bandera's ideology: it will begin to be developed “on the spot”. And these regions will be lost just as Central Ukraine is lost. So what to do?

To chop off from the nation affected by fascism all regions that are not yet infected or infected are relatively weak. To conduct there a tough purge and denazification, which in the prevailing conditions means deukrainization of everything and everyone. And the rest is allowed to rot in its own juice. Without Russian markets, including the labor market, without Russian resources, without Russian benefits, without Russian loans ... And watch the former "younger brother" roll to the level of Somalia. It does not matter whether we like this option or not; Other options we have already discussed above. This remained the only one. Not enough human strength, not even enough Russian power to save the people, a moron who does not want.

I already wrote that the Kiev regime will be overthrown before the militia reaches Kiev. I believe he will be regularly overthrown in the future. Somewhere once every three months. There can be no other way - in the absence of money, heat in houses, light and electricity. In the absence of food and medicine.

In a word, in the absence of everything except patriotic feelings, Maidan will be happening in the heart of Hochlandia beyond the Maidan. Peremoga for the perimeter. Who does not jump, that Moskal. And who jumps, a patriot. Who said “ride tired”? Quickly zradnika in consumption! Let us have two icicles of snot ringing under our noses - we just jump in the frost above, more often, more merrily. And so to the last Ukrainian.

... The last test, the last temptation for Russia in the "Ukrainian question" is a test of pity. When in fascist Ukraine
Somalia will come, from it flows of refugees in all directions. Including to Russia. Creatures, exultant of the kind of “burnt cotton”, “dead female of Colorado” and calling Russia “parachute”, will come to Russia and make claims for Russian assistance. And they will think that they are right. Because Russia always owes them. This faith can not be knocked out of the hochlia brain by nine grams of lead; the crest will die with her, as with her was born ...

So, the last temptation of Russia will be to slam the gate in front of the creatures. You wanted to Europe, so crawl there! And the fact that Europe will not accept millions of rogue creatures is a personal matter between Europe and the creatures. We are not concerned.
I do not really believe that Russia will pass this temptation. Pity for the defeated, whining enemy is one of the main weaknesses and at the same time one of the main strengths of the Russians.

But if Russia does not pass this temptation, if the “divorce” from the nation of the Selyuk, Raguli and whores does not take shape to the end - in the minds and on the cards, the “Ukrainian question” will not be resolved. It will only be postponed once again.