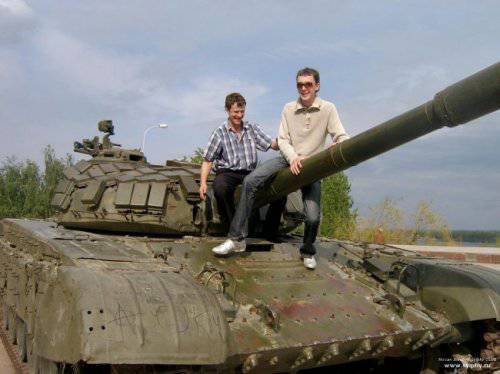 Are you accustomed to swearing at "idiots" who interfere with maneuvering on the road? Imagine, but it turns out you're still lucky. After all, you did not come across people who decided to travel to tank! We selected 8 stories related to theft or acquisition of military vehicles. We sincerely wish readers to avoid meeting on the road with any of the heroes of this material.

Many people know how ex-Soviet citizens settled conflicts in the early 90s. Disassembly - then the most popular way to resolve the dispute - at that time it was no surprise. However, here came across unusual specimens. So, in 1992, the veterans of Afghanistan came to settle the conflict with the Chechens ... on the tank stolen from the factory! The winners were detained by the police, the armored vehicle was confiscated - but residents of Nizhny Tagil - the city where the curiosity took place - still remember this history.

Gun: for the store - indispensable!

What is the best way to go shopping? Of course, on the tank! That is exactly what the citizen of Britain, Stephen Ellison, decided to buy for this purpose the reconnaissance Saber of 1974. The 4.2 liter engine, a thirty-millimeter automatic cannon and tracks - just what you need for easy shopping! The toy, bought at a military warehouse in Lincolnshire, cost the mechanic Stephen 14 000 pounds - not counting the cost of insurance, special rubber linings for tracks that protect the roads from damage, and daily expenses for gasoline. But Elisson is sure: the effect he has on others, sitting in a tank, is worth it!

Someone uses a tank for a trip to the shops, while the tester of the Urals Military Plant found another use for it. He decided to fight wage arrears with the help of an armored car! The man hijacked a tank from the test site in protest - but the chiefs did not appreciate this gesture. The tester was dismissed from the factory and now works as a farmer. Now he cuts through the tractor!

We are used to treating museum exhibits like mock-ups. And in vain! In 2006, oppositionists of the Hungarian government hijacked the Soviet T-34 tank right from the central square of Budapest. The car was installed as a monument to the 1956 uprising of the year and was considered quite harmless. To stop the riots, the Hungarian police used tear gas - the rebels could not get a hundred meters.

Soviet tanks are in demand not only in Hungary. In Poland, this year, four armored vehicles from the Second World War - T-34 and T-35 - were stolen. True, the Poles, unlike the Hungarians, invented a somewhat different application: they decided to turn in tanks for scrap. For 80 tons of material, the attackers expected to get 13 thousand euros - so they were not too lazy to attract several tractors and a crane, because the tanks were buried in the ground. However, the case collapsed: one armored car was intercepted in a trailer heading for the steel plant, and the rest were found in a private parking lot in Lublin.

Do not postpone until tomorrow ...

This story will be useful to those who like to put off important business until better times. After all, this is exactly what the workers did who found the T-34 Tank during the search work near St. Petersburg. Having decided that with the transportation of the military machine to the Kirov Museum of Local Lore, it is quite possible to wait, the search engines “temporarily” buried the tank not far from the place where they found it. When it was still time, finally, to make a monument out of the armored car, it became clear that there was no tank in the place where it was left. The car, buried by search engines, dug up and ... hijacked! I wonder what the use of the tank came up with these thieves?

Not every action should have any meaning - you can steal a tank and just like that. It is especially easy to steal if you pre-empt alcohol. An eighteen-year-old British soldier tested it for himself — he climbed into an armored car and drove right out of a military base on the gate. Threats and orders to protect the proper action did not have, but to stop a drunken young man in a military vehicle turned out in an ordinary roadside ditch - in which “for all purposes” a tank ”was stuck for some reason. The most striking thing in this story is that it did not end there. The soldier ran back to the base, where in front of the dumbfounded guards, he captured the second armored car. Apparently disbelieving the seriousness of the hijacker's intentions, the guards did not stop the drunken Briton this time either. He managed to get to the village, barely avoiding a collision with a car and a military patrol. The nature itself decided to stop this disgrace, having substituted a tree for the “driver” of the tank. The soldier crashed into a plant, after which the law enforcement agencies decided to arrest the rebel.

That which can be done by being in the embrace of Bacchus can be repeated and strengthened with the help of narcotic substances. In Sydney, a middle-aged man hijacked a tank - just like a Brit, just like that. Only in Australia, the attacker tried to catch for one and a half hours. The man was driving, pumping up drugs, and during his "walk" he managed to destroy several mobile phone towers and transformer booths. It was possible to catch the hijacker only after the tank that had suffered had been stuck in pieces of iron reinforcement.