Lumpen-kreakliat and the sociology of the Moscow riot 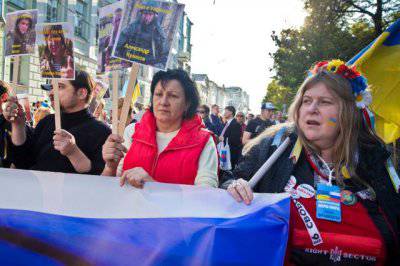 Passed on the weekend march evromo Muscovites in support of Euro-Ukrainians and against Novorossia with Russia should be considered not only in the ideological and political, but also in a sociological context.

Actually, what happened on September 9, 21 on Moscow streets, is senseless to analyze as a completed political action or an independent act.

This is just a maneuver - the first training session of working with a new type of society, which will soon be formed in Moscow. And this society should be considered only in the context of economic changes, which inevitably await the Russian and federal economies.

So, from a sociological point of view, yesterday’s march of Euromussians is the march of the unemployed and declassed tomorrow.

Because the change of the socio-economic model and the integration turn towards Asia will inevitably lead to mass unemployment among the creative class and pushing office workers to the streets.

This is how a new social group, the Moscow lumpen-creacliat, is formed. With an iPhone, account, fashionable bangs, credit "Honda", but hungry and without a real profession.

Each revoked license from another financial speculation bank is a new thousand to the crowd of lumpen-creacliat.

Each prohibited item to be imported from Western and Central Europe is just a few unemployed managers who hate the Kremlin and Putin personally.

Every closed NGO and media with foreign capital is an agitator of rebellion.

The sanctions war, which the US plays in Russia, is in fact being waged not in an economic, but in a public space. And under the blow of sanctions, the Moscow society is first of all — because no one is so integrated into the world economy as the Moscow middle and premium class is integrated into it. Moreover, it is integrated at all levels: from consumer loans, food, clothing - and ending with a currency bank card and holiday in Spain.

Sociology of the elite

The Moscow bourgeoisie and financial speculators and intermediaries, who in the course of building a sovereign economy of an industrial type and an integration turn into Asia, will simply be left without the usual super incomes should be considered a social group that will become an investor in the rebellion. The financial and exchange business under the “took under 3% in Austria, sold under 12% in Russia” scheme is already ending. Very soon, the exchange stratum of the Moscow elites will face not even financial, but criminal problems.

Therefore, the elite expect a split in the stockbrokers and industrialists. The state, naturally, will come out in support of industrialists - because the state will have no other choice. And in this case, the exchange elites also have no choice but to oppose the state.

Sociology of the state apparatus

And if in the regions mainly industrial-oriented officials are represented, then just in Moscow one can expect a bitter struggle for power on the part of stockbrokers.

The stratum of officials focused on the emission-exchange model of the economy will be the link between the elites who are ready to finance the rebellion, and the crowd of lumpen-creacliats ready to take to the streets to preserve the current socio-economic model of Moscow.

At the same time, you should not discard the 90's, driven into the shadows, but not destroyed by the elites, which, in fact, are the vehicles of the emission-exchange model of the economy. In a conflict within the Moscow society, the elite 90's will see their chance for revenge.

... So street riots in Moscow will be. But not because of Ukraine, Putin and New Russia. And because the socio-economic model of Moscow is flawed and parasitic. Therefore, there will be dances, and horse racing, and creative protest. The buildup will not be fast, but with each new economic decision in favor of restoring industrial-industrial sovereignty, new declassed elements will be added to the Moscow streets. Which simply did not have a place in the new Russia (at least in the same role).

The state needs to play preemptively and set the parameters of a new society so that each new representative of the lumpen-creacliat has the opportunity to find himself in new socio-economic coordinates. In the end, the majority of our fellow citizens, who may become the fuel for the Moscow riot, are not subjects, but objects of politics and often do not even understand what political forces are driven by them. The illusion of protest is best destroyed by the possibility of choosing a new socialization, and not by police methods. The destructive energy of the crowd can be directed to the creative direction of large-scale government projects. Only for this, the state will have to prove that the new economy and the new society are serious and for a long time - and present a new type of citizen. This type, which should be guided by those who are lost in the new socio-economic conditions.