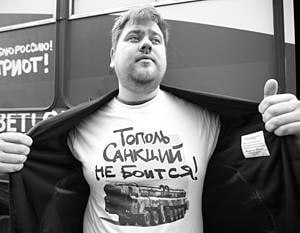 In recent days, the West has made several statements explaining what Russia should do in order to lift the sanctions imposed by Europe and the United States. More specifically, Barack Obama put it: if Russia changes course, sanctions will be lifted. It is clear that there can be no question of a change in the course of the speech - but is there any chance at all that the West will back down?

On Thursday, the G7 foreign ministers and the EU foreign policy commissioner stated that the sanctions are “not an end in themselves” and “can be curtailed as soon as Russia fulfills its ceasefire obligations and the Minsk agreements and will respect Ukraine’s sovereignty” - but “Otherwise, we are still ready to step up pressure on Russia for non-compliance”.

At the same time, the EU is trying to send signals that it is ready to begin a phased lifting of sanctions - a report on the implementation of agreements to resolve the conflict in Ukraine will be reviewed at a meeting of EU permanent representatives on Tuesday, after which Brussels may start the process of revising sanctions against Russia. Speaking about this, the European diplomatic source of TASS explained that there are two possible ways of abandoning them, "and both phased, the entire sanctions bloc does not deal with the abolition of the entire sanctions bloc": "the very discussion about the advisability of sanctions will begin in October," block sanctions "is unlikely to happen before November." At the same time, the source of the Financial Times in Brussels said that the refusal of sanctions next week is “extremely unlikely,” since the largest countries - in particular, Germany - “do not believe that the Kremlin has already done almost enough to give reason for such a decision” .

What are we dealing with? The threat to introduce new sanctions, as well as the promise to cancel those already in force, pursues one goal - Moscow must prove to the West that it is doing everything to ensure peace in Ukraine. Then the West will determine the necessary degree of encouragement. That is, it can cancel, and can tighten - depending on how Russia behaves. Although it would be more honest to say - on how the West regards our behavior. If it’s right, it will remove some of the sanctions; if it’s wrong, it will leave everything in place and even toughen it up. At the same time, the lifting of sanctions will not be just gradual - it will start from the very first, that is, the easiest. For example, a ban on entry for our officials and deputies will be abolished - as if this fundamentally changes something in a situation when it comes to a full-scale economic and propaganda cold war.

In essence, this is about the West’s so primitive attempt to get Russia to change our policy, which is even interesting - do they really believe that someone in Moscow will lead the game to “cancel - not cancel”? After all, it is absolutely clear that the sanctions will be strengthened or weakened on the basis of only one criterion - how it works for the environment and the weakening of Russia. No supporters of maintaining ties with Russia in the EU can now do nothing to actually lift the sanctions - because they do not determine the game.

There is only one scenario in which the pro-Atlantic forces in the EU would not have been able to prevent the lifting of the sanctions - if elections were organized in Kiev, the Kiev would regain control over the border with Russia throughout the whole territory of the DPR and the LPR, and the rebels laid down most of weapons and joined the ranks of the "people's militia". That is, Novorossia would simply have dissolved in the autumn gloom, while Russia would turn its back on it. Then Poroshenko would declare that the Minsk agreements are respected, Barack Obama would praise Russia for the right choice, and the sanctions would be lifted.

But there is no chance of implementing these points of the agreement, which means supporters of the blockade of Russia will always have reasons to accuse Putin of disrupting the Minsk agreements. And given that a unanimous decision is needed to lift the sanctions, a firm “no” from London or Warsaw will suffice, so that all the efforts of supporters of the preservation of European-Russian cooperation go to pieces.

Therefore, no one in the Russian government seriously considers not only the scenario of “lifting sanctions”, but even their “easing”. Everyone understands that in the near future the United States will have several reasons to justify the need not only to preserve, but also tighten the sanctions - and “convince” the EU. It is enough to consider the three most likely possibilities.

The first is the election of 2 in November by local authorities (parliament and heads of republics) to the DPR and the LPR and their refusal to elect by the Kiev legislation in December. It is an excellent reason to accuse Russia of “complicity to the separatists” and the intention to tear away a part of the territory of Ukraine - and, consequently, introduce new sanctions.

The second is problems with gas supplies to Europe. Ukraine refuses to pay for gas delivered before its supplies were cut off. In the next month or two, illegal selection may still intensify - and lead to the fact that Europe will begin to receive less serious volumes. And even the agreements reached on Friday between Ukraine and Russia on the gas problem are not yet a guarantee against such a turn of events - judging by how contradictory are the comments of Ukrainian officials on this matter. If Russia does not want to close its eyes and donate gas to Kiev for another billions of dollars, increasing supplies to Europe, it will be accused of starting a gas war with the EU. About this directly writes, for example, American Newsweek:

“Few people in the energy sector doubt that Ukrainians are taking away some of the gas destined for deliveries to Europe, and this is happening despite Russian protests about the illegal transfer of millions of dollars to the Ukrainian pipeline system. The use of such schemes makes Gazprom a hostage of not particularly scrupulous politicians in Kiev. As the temperature decreases, Ukraine may start pumping even more gas, thereby depriving Central Europe of supplies, but Gazprom will be blamed for this. ”

If desired, the United States and the atlantists in Europe will inflate a terrible scandal - scaring the Europeans with the Russian “General Frost” who will soon come to them. Excellent reason for the new sanctions.

There is a third, most likely reason - the resumption of hostilities in Ukraine. It is almost programmed by the alignment of forces and the course of events in Square - and it is clear that Russia will immediately be accused of “aggression”, “violation”, which will entail a new “punishment”. It does not matter who exactly breaks the truce - the militia or Kiev. In the extreme case, Washington may even force Kiev to "make war" - just to prevent the EU from easing the sanctions against Russia.

In any case, you need to understand that sanctions are intended not only to force Russia to back away from Ukraine, but also to “change course” - that is, to abandon the protection of national interests (which is possible only in the case of not just Putin’s departure, but also replacing him with a pro-Atlantic ). This is the main task for the United States, and the passing task (although the stakes are very high here) is the destruction of the economic ties between Russia and Europe, which makes it possible to tie the Old World to the New not only by military means, but also within the framework of the transatlantic partnership. Until the moment when the United States will be convinced that none of these goals can be achieved, years will pass.

We need not just to get used to living in conditions of sanctions - and even more so not to be held for any talk about the possibility of their abolition, but to build a strategy for our economic development. Including on the basis of the fact that our relations with Europe and the United States will rapidly decline throughout the next five years. And when they resume - with Europe, in any case, we are doomed to mutual trade - then we must be in a much stronger and more self-sufficient position than now.

To do this, we need, together with China and BRICS, to accelerate the most important and most difficult work on reforming the global financial system, to restructure our energy and trade flows, to change the economic policy in the country, focusing on stimulating the domestic market and demand, on large-scale infrastructure projects ( including transport links between Europe and Asia), to the new industrialization. All this needs to be done, without being distracted by the absolutely senseless and provocative game “they will remove - they will not remove”, which the West is trying to lure us into. Let them play with themselves in cat and mouse.