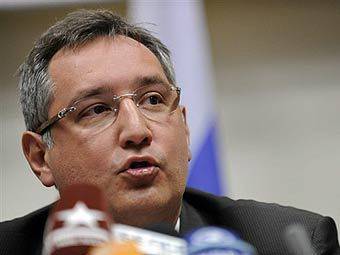 Apparently, the mental virus that hit the Russian “reloads” turned out to be extremely infectious, since even in the speeches of the most sane and sober-minded domestic politicians sometimes “reload” motives slip through. In this sense, the statement made by the main Russian “contactee” with the North Atlantic “newcomers” (who almost got close to the borders of the Russian Federation) - Russia's permanent representative to NATO Dmitry Rogozin is very indicative.


Immediately after the completion of the unsuccessful overseas voyage, during which the Russian delegation, probably for the thousandth time in a row (and without the slightest chance of success), tried to convince Washington to abandon its aggressive anti-missile plans, Dmitry Olegovich (as they say “our permanent representative always ripened”) made an impressive diplomatic march to Turkey. Apparently, in order to remind our "Turkish friends" history the sadly memorable Caribbean crisis, when their insatiable desire to play along with the United States in their strategic expansion once almost put the world on the brink of a nuclear catastrophe. Recall that the Pentagon is currently negotiating with Ankara about the possible deployment of the radar on the territory of the All-Russian Turkish Health Resort (that is, it can be said at the very side of the Russian Federation) within the framework of the US-European missile defense system.

Summing up his trip overseas, the Permanent Representative of the Russian Federation in his intrinsic figurative manner described the details of his meeting with representatives of the republican minority (and the right-wing part of it) in the US Senate - Senators John Kyle and Mark Kirk. As Dmitry Rogozin noted, he had the impression that the “hawk” wing of the American establishment “does not imply any cooperation with Russia at all”. According to the Russian negotiator, “they do not in fact conceal the fact that the missile defense system being created will not be deployed by them against some mythical countries in the Middle East that have virtual rocket weaponsand against the Russian Federation. "

And in order for the audience of the interview given by the Russian Permanent Representative to RIA "News", Could even more clearly feel the stinking atmosphere of the current Russian-American relations, Dmitry Rogozin, at the end, completely spoke with the" rough language "of Hollywood filmmakers, who filmed fantastic thrillers about cyborg people:“ I had the impression today that we were transferred to a few decades ago, and in front of me were two monsters of the cold war who were looking at me, most likely, not with pupils, but with sights. ”

I must say that if the passage quoted above was the last in Dmitriy Olegovich’s very expressive “Turkish monologue”, then the right word would be like a literary character who exclaimed “Stop the moment, you are wonderful!”. Since this does not sound like an infantile reboot chatter inherent in our elites, but rather resembles the words of a responsible politician who is not inclined to engage in cheap lacquering of reality for the sake of building his own good “credit history” with the West. However, as is often the case, all good things someday (and sooner rather than later) end. So this time, as it turned out, all of the above was just a prelude to the indecently deep “reset curtsy” addressed to the head of the ruling US administration.

“I made sure that the alternative to Barack Obama is actually the curtailment of all cooperation programs with Russia,” the official responsible for building up relations between Russia and the Western military bloc unequivocally defined the “whoiswho” in the American establishment. After that, it became finally clear to what Dmitry Rogozin so diligently led the rhetorical base. According to him, the idea of ​​creating a single EuroPRO becomes the subject of a fierce struggle between the White House (“good cop”) and its republican opponents (who, according to D.O.'s assertion, are not just “evil cops”, but also cyborg from “cold war ").

Involuntarily played up the propaganda rhetoric of American diplomacy, which despite numerous facts clearly contradicting the idyllic image of the Washington “dove of peace” represented by Barack Obama (“humanitarian air strikes” on Libya, the continuing “democratization” of the Middle East through the occupation of Afghanistan and Iraq) emphasized Dmitry Rogozin that Russia should protect itself in case politicians like Kyle and Kirk come to power. However, how to do it, he never explained. However, if we creatively develop the idea “catch the moment while Obama is in the White House”, which can be read by the permanent representative, it can be assumed that “rebooting to a loss of consciousness” (that is, to a complete loss of geopolitical subjectivity on the world stage) is what we as they say, "the doctor prescribed."

At the end of his speech, Dmitry Rogozin, as it were, among other things, reproduced the main anti-missile myth about the Iranian missile threat, which, in the opinion of high-ranking PR experts from Washington, is intended to legitimize the deployment of US missile defense elements in Europe. According to our permanent representative at NATO, the deployment of the European missile defense system may be a preparation for an attack on Iran. “There are experts in Russia and in Europe who believe that these plans can be a preparation for an attack on Iran,” once again “sang” to the Russian audience the “old” (but by no means good) American “song about the main thing” Dmitry Rogozin.

Statements by the official representative of the Russian Federation to NATO on the issue of the prospects for Russian-American cooperation in the field of missile defense in an interview with KM.RU were commented by Konstantin Sivkov, first vice president of the Academy of Geopolitical Problems:

- It is obvious that no agreement on missile defense between Russia and the United States can not be in principle, since the American system is directed against our country. In such a situation, cooperation with the Russian Federation in the field of missile defense on conditions acceptable to us is simply excluded.

As for the preference of the Obama administration over the Republicans from the point of view of Russian interests, everything is not so simple. The fact is that under the Democrats and the Republicans, the United States pursues its own goals, which do not change at all, despite any personnel changes in the higher echelons of power. And no US president can make decisions ignoring the interests and goals of major American industrialists and financiers. And the task facing them is extremely simple: in order to survive in the conditions of the global crisis, it is necessary to ensure the establishment of military-political control over the world's major sources of resources. This goal is specified in the US national security strategy, the implementation of which in the life of which Democrat Barack Obama should be engaged in the same way as his predecessor - Republican George Bush. In this sense, nothing changes. Changing only the way to achieve the goal. If Republicans are guided by brute military force, then Democrats are more inclined to use soft power (the so-called “soft power”). That is, they are ready to cooperate with Russia, but so that it is ultimately beneficial only to the United States.

What Barack Obama is doing on the foreign policy arena today is one on one Bush course. If the predecessor of the current head of the American administration simply unsubstantiated the label of the participants of the “axis of evil” on countries and on this basis began military aggression against independent states, then Obama does the same thing, but first the security services subordinate to him “blow up” the situation in these countries. Let us recall the recent chain of revolutionary events in the Middle East and North Africa, when the situation in several countries in a row almost simultaneously exploded. Agree - this can not be an accident.

The only thing we can talk about is that Obama, being focused on less clumsy ways of achieving the goals of the global hegemony of the United States, is still a bit more sane and acceptable for Russia. At least you can still talk about something with him. As for gentlemen like Bush and his followers like McCain, Sarah Palin, some Republican congressmen, there’s nothing to talk about with them. These guys can very easily plunge the USA (and the whole world after them) into a big war to achieve their goals. In contrast, the ruling Democrats seem to allow our elites to save face, entering into negotiations with them. However, this is not the only advantage of the Obama administration. Still, with an intelligent enemy, you can somehow agree. And with the fool of the enemy no.

In conditions when the USA is in the phase preceding its collapse (and, if Congress raises the top level of public debt or not, it doesn’t matter - the internal reasons causing the debt build-up process cannot be simply eliminated) the peaceful scenario of further events is practically excluded. In order to get out of the debt crisis, the United States will either have to bring down the living standards of its population (which will provoke a social explosion), or it is necessary to conquer other nations again in order to feed its poor people. If under such conditions aggressive republicans come to power, they will rely on brute force. And as the economic problems of the United States are aggravating, they are fully capable of unleashing full-scale military operations right up to world war. If the Democrats remain in power, they will try to maneuver in the field of political and diplomatic steps. Of course, these will also be imperial steps in order to establish world domination. But the chances of avoiding another world war will be at least greater.

As for Dmitry Rogozin’s statement that the appearance of the American radar in Turkey could mean preparation for the start of aggression against Iran, I disagree with him here, because the United States is now engaged in deploying strategic missile defense facilities that are not intended to "Engage" in Iranian tactical missiles. At the same time, we know that Iran’s missiles do not reach Europe very close. Simply, the United States is deploying a missile defense system to protect its bases in areas that Iran can reach with its missiles. These are American bases in Iraq and eastern Turkey.

Thus, the deployment of US missile defense indicates that the United States is preparing for large-scale military operations, including in Russia (the North Caucasus region). Bases in Romania and Bulgaria are focused on actions in this direction. Finally, it is still a big question - will the Turkish authorities, given their current domestic political course, provide their territory as a springboard for American aggression against Iran? I do not think so. Moreover, the Erdogan government is increasingly turning towards a more independent course of Turkey in the international arena, abandoning US patronage. As you know, Ankara in 2003 refused to give Washington the opportunity to attack Iraq from its territory. I think that in the event of war against Iran, the decision will be the same.

We are in Yandex Zen
Pristina throw. Russian stolen victory
Incredible but obvious
4 comments
Information
Dear reader, to leave comments on the publication, you must to register.