Multi-tower tanks of the USSR. Part of 2. Medium Tank T-28

26 September 2014
32
The T-28 is a Soviet medium three-turret tank belonging to the interwar period, it was developed in 1930-1932 by engineers of the tank and tractor design bureau of VOAO, led the work on the project of S. A. Ginzburg. This car was the first medium a tank in the Soviet Union, which was able to launch into serial production. In the period from 1933 to 1940 in Leningrad at the Kirov plant 503 copies of the T-28 tank were made.

In 1930, the Soviet Union negotiated with Great Britain for the supply of heavier tanks to the country, and the possibility of buying three-tower Vickers Medium Mark III tanks, which were also known as Vickers 16 tons, was discussed. On the basis of machines purchased in England, it was planned to expand its production of breakthrough tanks. However, the negotiations ended in failure, the company Vickers-Armstrong did not support the idea to sell several samples of the tank, citing the secrecy of its design. At the same time, the USSR was offered tough conditions under which a deal could be concluded. In particular, the Soviet Union was asked to pay to get familiarized with the tank design, to purchase 10 tanks from Vickers Medium Mark III, and to guarantee the acquisition of light tanks from Vickers Mk. E and tanned shoes Carden Loyd Mk. Vi.

However, Moscow was not satisfied with such conditions of the deal, and all options were rejected. As a result, the USSR began work on creating its own counterpart of the Vickers Medium Mark III tank. The faculty of motorization and mechanization of the Military Technical Academy named after Dzerzhinsky, as well as the tank and tractor design bureau of the All-Union Artillery Union (All-Union Arsenal Association) took up the sketchy design of a new tank. For the new tank, the Soviet military formulated the following requirements: maintaining the overall layout of the British combat vehicle, weight not more than 16 tons, weapons - 45-mm cannon in the main turret and tank machine guns in small ones. The tank was planned to be equipped with a combination armor, which included sheets of 10 mm thickness on the roof, 17 mm on the vertical surfaces of the vehicle, in the frontal part - 20 mm. 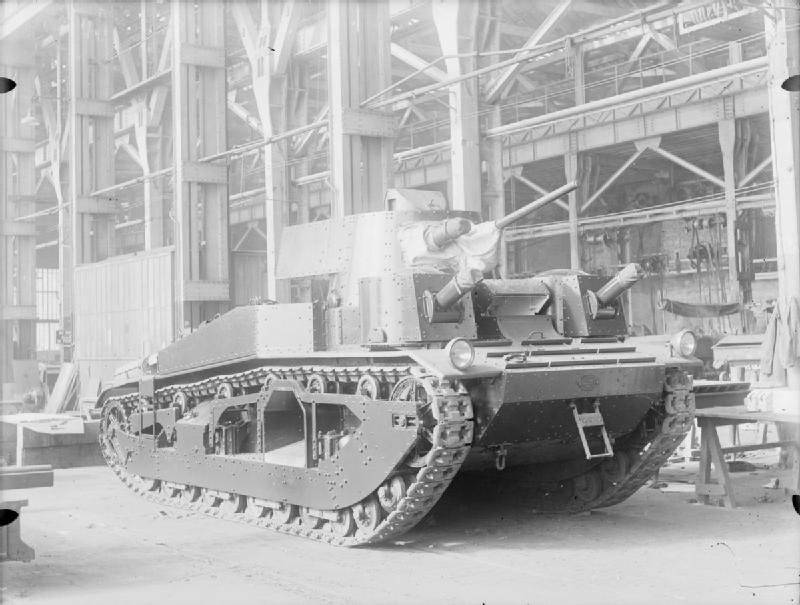 The first prototype of the new tank received the designation T-28-1, the car was made of non-armored steel, the tank was ready in May 1932, then he was able to complete his first test run. In contrast to the previously approved project, the tank was distinguished by the installation of a more powerful V-shaped 12-cylinder piston aircraft engine of the M-17 model, which is water-cooled. The tank also received an 37-mm PS-2 gun, since at that time the tank 45-mm gun was not ready yet. Later, this prototype tank was presented to the court of the Office of Motorization and Mechanization of the Red Army. The management appreciated the car positively, suggesting at the same time installing the PGE diesel engine on the tank, PS-3 guns of 76,2-mm caliber and carrying out a number of design improvements. As a result, all the wishes of the customers were fulfilled, with the exception of the installation of the PGE diesel engine, since its creation had not yet been completed.

Serially, the new tank really began to be produced only in 1934, when it was possible to manufacture 50 tanks, as well as spare parts for T-28 for a total of half a million rubles. By this time, it was possible to carry out a large amount of work on the reorganization of the production department, the rearrangement of the equipment needed to create a tank, the release of a large number of special measuring and cutting tools. There was also established reliable cooperation with all related companies for this project.

The hull of the serial T-28 tanks was assembled from sheets of armor steel 20-30 mm thick. In the tank there were 4 offices for various purposes: driver, combat, transmission and engine. At the same time, the tank hull itself was produced in two different versions: riveted-welded or all-welded. Later, the main gun turret began to put 76,2-mm guns KT-28 or L-10. It is worth noting that the 76,2-mm KT-28 gun (Kirov tank) of the 1927-1932 model with a barrel of just 16,5 calibers could send an armor-piercing projectile at a speed of just 381 m / s. The gun was installed in the main turret of the tank, to the right of it, as well as in the niche of the turret mounted 7,62-mm DT machine guns. 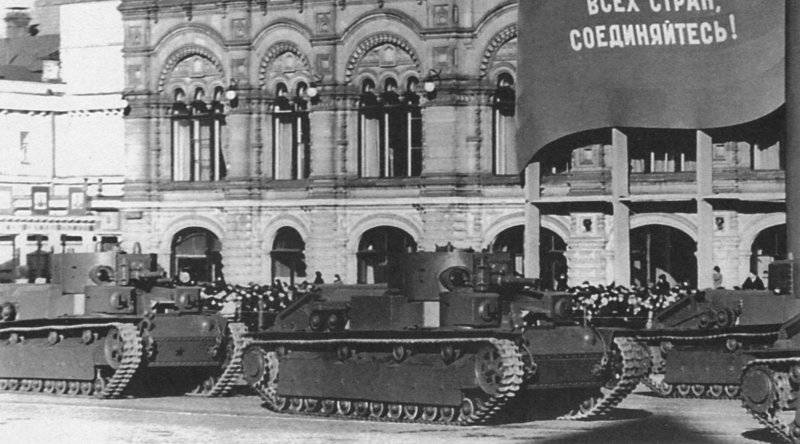 The sighting system of the CT-28 gun included a telescopic sight of the model 1930 of the year and a periscope of the model 1932 of the year. The mechanism of rotation of the turret of the tank had both electric and manual control. In the gun turret used sector-type lifting mechanism - manual. In two more small towers, one DT machine gun was mounted. At the same time, the main turret of the tank had a circular sector of fire, while small machine-gun turrets had a sector of fire in 165 degrees.

From 1938, the T-28 tanks began to install a new more powerful tank gun L-10, having a barrel length in 26 caliber. The speed of a projectile fired from such a cannon already reached 555 m / s. The gun was much more powerful than the old KT-28 tank gun. In the new tanks, the original layout of the ammunition was also used - the shells were located in rotating ammo packs located under the gunner’s and commander’s tank seats. In each such combat pack, 12 shells were placed. In addition, to the left and right of the driver's seat were rotating drums - on 40 shops for DT machine guns each.

The crew of the T-28 included 6 tank crews: a driver’s mechanic, a tank commander who was also a gun loader and a gunner, a radio operator who also served as the second loader, a gunner, and two gunners stationed in machine-gun turrets. 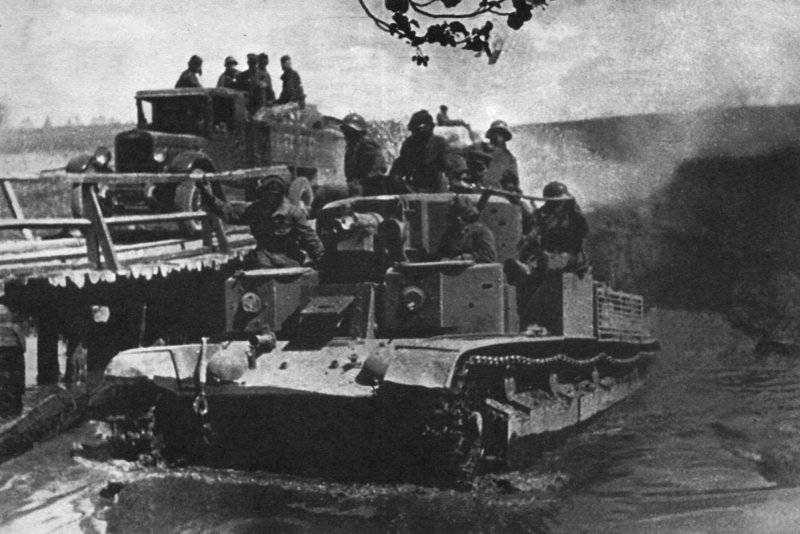 During the serial production of the T-28 tank, up to 1940, the designers managed to make the 600 order various fixes, including the installation of the P-40 anti-aircraft turret, replacing the general landing hatch with two. In addition, it was possible to increase the voltage of the main turret of the tank in 2 times - from 12 to 24 B. Also, the Safar internal communication devices, which were mounted on tanks of the first series, were replaced with the TPU-6 domestic tank intercom, designed for all crew members. 28-TK-71 or 1-TK-71 radio stations were mounted on all medium T-3 three-tower tanks.

At the same time, in the first years of serial production (from 1933 to 1935), the tank suffered from chronic diseases, the car had a lot of flaws, which in some cases were very serious. For this reason, some tanks that had already been released were delayed for a long time by military acceptance, and in the military vehicles already handed in, they had to work to eliminate defects. The work was carried out directly in the army with the involvement of special factory brigades. All this time, Soviet engineers did not abandon attempts to modernize the T-28 tank.

In the autumn of 1935, SKB-2 embarked on a project to create a “high-speed” version of the T-28 tank. The maneuverability and speed of a three-turreted tank was proposed to be enhanced by the work on the redesign of the gearbox and final drives. His first test of the new version of the tank, which received the designation T-28, passed 11 September 1935 of the year. The tank was able to easily show the speed in 55,8 km / h. After carrying out the necessary modifications to the project in May 1936, the commission carried out regular tests of the tank - the high-speed machine T-28 "Stalin". 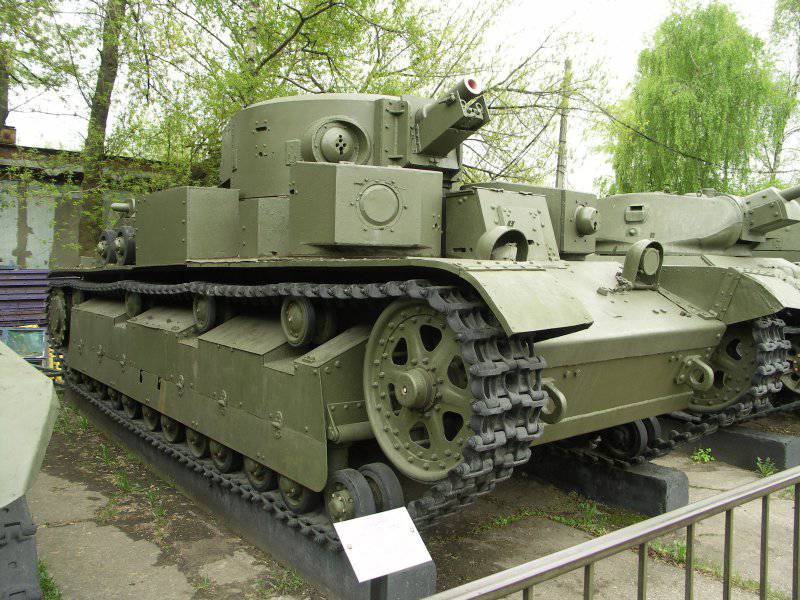 In conclusion, according to the test results, the representatives of the commission noted that the T-28А high-speed tank, in terms of its performance characteristics and design features, is a full-fledged combat model and is suitable for use in military units. The T-28A tanks began to be mass-produced since June 1936. Until the end of the year they were collected 52 pieces. In November, the 1936 of the year, on an average three-turreted T-28A tank with the 1551 serial number, was a modified design transmission. During the tests of this sample, the tank was able to show a record speed - 65 km / h.

The use of T-28 medium tanks in the Winter War with Finland revealed the insufficiency of booking cars. Given this, an additional shielding scheme was created for the tank. Combat vehicles were equipped with screen armor in factory conditions. The shielding was carried out by welding additional sheets of armor steel 20-30 mm thick to the tank hull and its towers. Due to the shielding, the thickness of the hull armor was brought to 50-60-mm, and the upper part of the sides of the vehicle and towers - to 40-mm. Such a move made it possible to seriously increase the security of the T-28, but at the same time it had the most negative effect on the dynamic characteristics of the tank, since its mass after shielding grew to 32 tons.

The screening of the T-28 was carried out directly at the Kirov plant in Leningrad in 1940. Tanks that have undergone this procedure, received the designation T-28E (shielded). It was planned to increase the armor on all available tanks (more than 400 units), but, according to the available documentary information, all 111 tanks were shielded. Of these, 103 machines were completely shielded, and 8 partially. Most of the shielded medium tanks T-28 went to parts of the Leningrad Military District (approximately 80%), another 15% of tanks settled in the Kiev Special Military District, the entire 2 of such tanks managed to get parts of the Western Special Military District. 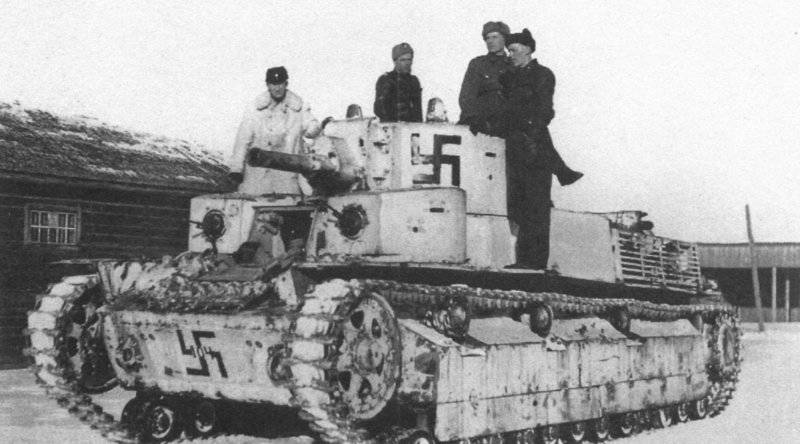 According to the information on 1 in January 1941 of the year, the Red Army was also equipped with 411 medium tanks T-28 of various modifications. Initially, these machines were used to recruit individual heavy tank regiments of the RGC (Reserve of the Main Command), which, in December 1935, it was decided to rename to separate heavy tank brigades. Each such brigade was in service with the 54 tank. Two of these brigades, 20 and 10, which were armed with T-28 tanks, managed to take part in hostilities on the Karelian Isthmus. At the same time, the tank was not “younger”; by 1941, the T-28 was morally obsolete, although it surpassed all German tanks of those years in terms of its weapons, and it was only inferior to the German PzKpfw IV in terms of security.

T-28 tanks took an active part in the fighting in the first stage of the Great Patriotic War. Virtually all of these cars were lost in the 1941 summer fights of the year. The surviving tanks were limitedly used in battles up to the 1944 year. The latest documented evidence of the use of T-28 tanks in battle dates back to July 1944. Combat vehicles were used during the offensive of the Red Army in Karelia. Trophy tanks T-28 also used by the armed forces of Finland. At the same time in service with Finland, these Soviet tanks remained until the 1951 year.