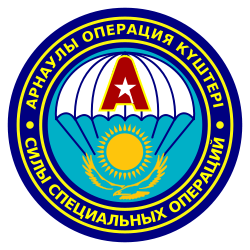 "Arystan" ...- special division of the National Security Committee of Kazakhstan on combating terrorism. Translated from the Kazakh: "Leo". The most professionally trained and technically equipped special unit of the republic. Equipped with the latest technology: in 2000-2001. For the squadron, modern equipment was purchased from the best Western firms - Kevlar helmets and body armor, costing thousands of dollars per set on 10-18, Zig-Zauer sniper rifles, communications equipment, engineer robots. In total, over one and a half million dollars were allocated for re-equipment and re-equipment. The unit is recruited only from the number of officers. In total, it consists of up to 100 fighters. The main base of Arystan is located in Astana, as the capital of the state and the location of the central office of the National Security Committee. In addition, the special units have two full-time branches: in Almaty - at the site of the original base, in Aktau (former Shevchenko) in the Caspian Sea - to ensure safety in the oil fields. As part of the latter, a combat swimmers unit was created, the first actual run-in of which was held in 2005 during the Yug-Antiterror-2005 CIS exercises in the Caspian Sea. Within the framework of the ATC CIS and the RATS SCO “Arystan” and the ATC KNB regularly participate in the international annual exercises held.

His history The Arystan service has been operating since 1990 of the year when, in Almaty, according to the order of the Chairman of the KGB of the USSR No. 0031 from 3 in March 1990, the 14 branch of Group A of the 7 control of the KGB of the USSR was established. The area of ​​responsibility of this regional division at that time included Turkmenistan, Tajikistan, Uzbekistan, Kazakhstan, Kyrgyzstan, Omsk, Tomsk, Novosibirsk regions and Altai Krai. Created special forces did not immediately become operational. The actual formation was completed in October of 1990, the Alma-Ata-based Alfa was headed by Viktor N. Zorkin, a KGB officer who was transferred from his post as commander of a similar office in Khabarovsk. Almost until the very end of 1991 and the collapse of the USSR, Kazakhstan’s Alpha was engaged in combat training and was in combat duty: no serious incidents and, accordingly, special operations took its share during this period. However, there were some organizational changes. The combat strength of the group was replenished, and the 14 branch was converted to 12, and then 6, Group A. After the August events of 1991, Group A of the KGB was transferred directly to the USSR President M.S. Gorbachev and became part of the Security Directorate at the Office of the President of the USSR. Accordingly, the Alma-Ata subdivision “A” also became subordinated to the Security Directorate. 13 January 1992 was created on the basis of the Alma-Ata division "A" Nursultan Nazarbayev created directly subordinate to him the Department "A", which in fact became the first official military formation of Kazakhstan after the acquisition of state sovereignty. In April, 1993. Division A from the Presidential Guard Service was transferred to the National Security Committee (KNB), and on June 11 1994 was transformed into the Arystan Service (“Lion”) as part of the KNB. Arystan fully absorbed combat antiterrorism groups previously held in the central office of the KNB. Viktor Zorkin moved to Russia almost immediately after independence, where he continued his service. However, in 1991– 1992. Viktor Karpukhin, Major General of the KGB, Hero of the Soviet Union, who had combat experience and experience in training special forces, the former commander of the Allied Alpha, worked in opal after the August Coup in Kazakhstan. This is the only full-time special unit of the National Security Committee of Kazakhstan on combating terrorism. Under the jurisdiction of "Arystan": ensuring the safety of objects of increased environmental and radiation danger, the seizure of terrorists and armed criminals, preventing the actions of traffickers weapons, by drugs. Arystan is the only special-purpose unit, as an independent body of the National Security Committee, that possesses the appropriate technology, special weapons, equipment and technical means, whose activities are directly aimed at combating armed terrorism related to the hostage-taking. The Arystan service is a mobile rapid reaction unit and the main principle of its use is to conduct special operations to localize terrorist manifestations throughout the country, carried out by the special unit from its operational bases.

The first specialists were trained under the guidance of professionals from the group “A” of the KGB of the USSR, then they were sent to consolidate the skills they had received for refresher courses for officers of the anti-terrorist units to Moscow. Subsequently, the most trained special forces officers were trained at the CIA and FBI training centers in the United States of America.

In 1996-1997, specialists from the Arystan Service visited the leading anti-terrorist units of the Russian Federation (Alpha, Vympel), Germany (GSG-9), Israel (Yams), Great Britain (SAS) where they got acquainted with the methodology of education and training of specialists and the technology of special operations.

In the division, the most prepared graduates of higher military and civil educational institutions of the republic with excellent health and high sports qualifications are pre-selected. Preference is given to young guys specializing in various types of martial arts, military-applied sports and sniping. For further professional selection and study of moral and volitional qualities, a system of standards and requirements is used, based on the normative base for the training of special forces units of the USSR Ministry of Defense and the special forces of the US Army, modified accordingly in relation to our specifics. Specialists of a narrow professional orientation who meet the requirements - dog trainers, explosive technicians, telecommunications workers, system programmers are selected in the subdivision. To assess the level of preparedness, the entire personnel of the Service annually, according to the system operating in the unit, passes tests for fire, physical and special tactical training. Twice not complying with the requirements of standards are deducted from the unit. To consolidate and improve the level of acquired skills, during training, staff are trained in mastering all types of regular and special weapons, shooting at night, day and night, at extreme ranges and from short distances. The main focus is on developing skills for hitting the target from the first shot, first stage, on the move, by flares and sound, as well as firing in city conditions, in the mountains, on an airplane, on a train car, etc.

Each fighter is trained in hand-to-hand combat, combat grenade throwing, accelerated movement over long distances using a map and a compass, including in mountainous areas, swimming in difficult conditions. Classes on military engineering training using explosives are held regularly. In the classroom acquired skills of military medical training. As for tactical and special training, it is diverse, professionally multi-faceted, and very unusual from the point of view of both an army specialist and a security officer. They constantly develop and test skills for neutralizing terrorists and freeing hostages at various “objects” of the assault both in the city and in the field, during practical classes. During classes, elements of tension, surprise, danger and risk are introduced into the educational process. For rapid and sudden penetration into the premises through the windows, descent from high-rise buildings, structures, helicopters, fighters "Arystan", use special suspension systems. They are run-in on armored vehicles, are engaged in airborne training, are required to know any samples of automotive equipment, acquire the skills of driving and firing from an armored personnel carrier. Radio communication is carried out on standard radio communications when driving, on foot, in a car, in firing and in combat missions. To test their penetration methods, they study the technical structure of domestic and individual foreign airplanes, railway cars and buses.

For the successful implementation of the tasks assigned, the employees of Arystan use practically the whole range of both conventional “military” weapons and special ones. In particular, in operations involving the taking of hostages, silent, low-power, high-precision small arms are used, and so-called can be used to directly influence criminals. "Non-killing" products that have a shock, pain, light and sound effect. At the same time, for the elimination of a large criminal group that is actively firing resistance, Arystan has all the necessary forces and means. Accordingly, the tasks of equipping and equipping fighters of “Arystan” are significantly different from similar units of the Ministry of Defense and the Ministry of Internal Affairs. In particular, they use armor jackets of more than ten modifications, protective uniforms, including armored helmets, knee pads, elbow pads, goggles and gloves. For emergency penetration into the premises, specially designed kits are used. To search for explosives and narcotic substances - in the subdivision there is a search and explosive engineering unit with a dog service, which, along with specially trained mine detection dogs, is equipped with various special tools - robotic complexes, X-ray machines, hydraulic guns for the destruction of the HL and many others. In its activities, the special purpose subunit "Arystan" is guided by the Constitution, the legislation of the Republic of Kazakhstan, the regulatory legal acts of the National Security Committee, one of the main acts defining the powers of the special purpose subunit "Arystan" is the Decree of the President of the Republic of Kazakhstan having the force of the Law of December 21 “On the national security bodies of the Republic of Kazakhstan. "

In addition to the main task - combating terrorists - the functions of Arystan gradually added to the seizure of especially dangerous criminals, suppressing the actions of smugglers and arms dealers (in the case of their development by national security agencies), as well as searching and deactivating explosive devices (for which the service was equipped modern explosive kit). Nowadays the special training of “Arystan” is based not only on the Soviet experience. Special Forces employees undertook internships and training at the base of the Special Purpose Center (CSN) of the FSB, as well as the American CIA and FBI, the Israeli Yams, the British CAC and the German GHA-9. Each year, unit soldiers pass a qualifying exam. The training process within the unit is combined with working out the interaction of the personnel of the special unit with the BSS and PS, as well as with the forces of the Ministry of Defense, the Ministry of Internal Affairs and the ASF during joint operational-tactical exercises of various kinds on a republican scale.

Now the decision to involve “Arystan” in various official activities is taken mainly by the Anti-Terrorist Center (ATC) of the National Security Committee. In recent years, Arystan has been regularly involved in the detention of members of terrorist and extremist organizations throughout the country.

As part of "Arystan" has its own sapper unit. Insignia: cornflower beret. The Arystan anti-terror service consists of 2-3 controls. The standard of time for which fighters penetrate a bus seized by terrorists is 7 seconds. In a year or two, 8-10 lieutenants enter the Arystan for further service. For psychological training, the "lions" are on duty at the morgue and help the orderlies open the corpses in order not to be afraid of blood. To get the right to be called an Arystan employee, beginners go through tests that are similar to getting a maroon beret: they pass an obstacle course, prove their ability to handle weapons, demonstrate hand-to-hand combat techniques, engaging in real combat with three experienced squad fighters. At various times, the subunit was commanded: Colonel Aydar Bazylov, Colonel Fayzulla Kamenev, Major General Seytzhan Koibakov, and others.