26 September 2014
19
Anti-aircraft missile system 9C37 "Buk" was adopted in the late seventies, and since then has been repeatedly upgraded. A number of successful solutions that underlie the Buk project provided the anti-aircraft complex with a fairly high modernization potential. It is noteworthy that not only Russian specialists were engaged in the modernization of the Buk air defense system. In the middle of the two thousandth, engineers from the Republic of Belarus spoke about their project to modernize the old system. The project “Buk-MB” was created in order to improve the characteristics of the complex and simplify its operation. 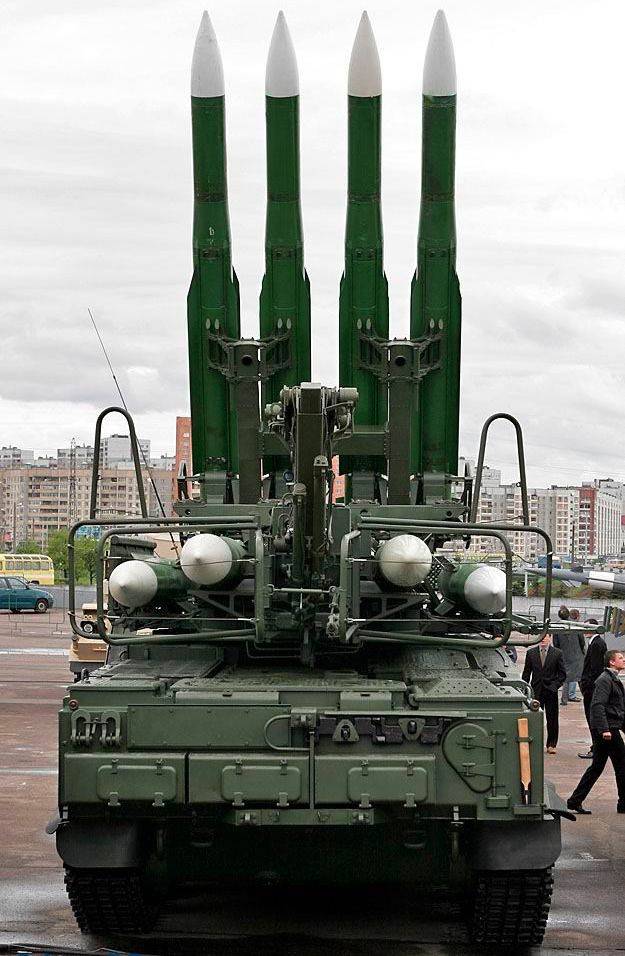 The upgraded Buk-MB anti-aircraft complex was first shown in 2005 for the year at the MILEX exhibition in Minsk. The project of modernization of the complex was created in the State Scientific Production Association "Agat". It was claimed that the updated ZRK received a number of new radio-electronic equipment built on a modern element base. This made it possible to improve various characteristics of electronic systems, improve noise immunity, improve the ergonomics of crew workplaces, and also equip the complex with a new system for exchanging data with the command center.

The applied innovations provide higher characteristics in comparison with the base complex “Buk”, and also make it possible to simplify the training of personnel. The complex of electronic equipment of the Buk-MB air defense missile system has a combat work simulation mode intended for training calculations. The modernization carried out by Belarusian specialists allegedly allowed the complex to work efficiently and meet current requirements for the next 15 years, i.e. until the end of this decade. 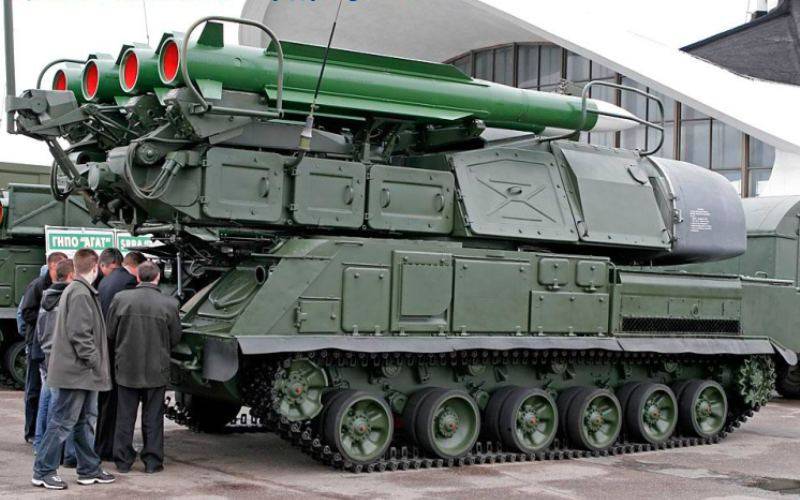 Within the framework of the Buk-MB project, the electronics of the command and control station (PBU) 9C470 underwent the greatest refinement. After the update, the BSP receives the designation 9C470MB. During the upgrade, the PBU electronics is replaced by 80%. Both the speed and characteristics of the systems and the ease of operation of the calculation increase. In particular, operator workplaces are equipped with liquid crystal displays. During the MILEX-2005 exhibition, it was claimed that the new PBU for the Buk-MB anti-aircraft complex was almost ready for mass production.

Self-propelled fire installation (SOU) 9А310МБ differs from the base machine with a large number of new equipment: almost 80% of all equipment components are subject to replacement. Significant alterations have undergone calculation jobs. In order to improve the performance and speed of the complex, the Buk-MB project provides for new means of communication, providing data transfer between PBU, SOU and other elements of the anti-aircraft complex. An interesting innovation in the project is the use of a Belarusian rangefinder laser rangefinder. 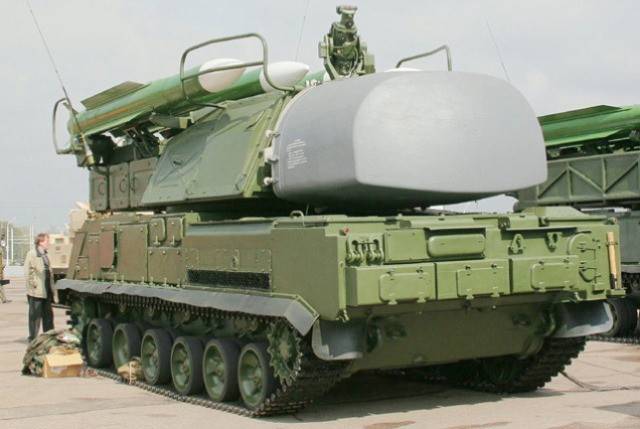 The 9-39MB start-charging unit (ROM) also received new equipment during the upgrade, but for a number of reasons it has undergone fewer changes. The hardware ROM was proposed to be updated only on 20%. This feature of upgrading the 9A39MB ROM is associated with the tasks assigned to it and the equipment used. So, the starting-charging situation does not have its own radar equipment that would need to be replaced.

The project “Buk-MB” implies the introduction of changes in the design and composition of the equipment of various machines of the base air defense system 9С37. In this case, the state of the complex remained the same. To monitor the environment and detect air targets, it is proposed to use a self-propelled radar 9С18М1 "Dome-М1". The unit is managed by one PBU 9C470MB. Six SDN 9А310MB and three 9А39MB ROMs, divided into three batteries, are responsible for attacking the targets. 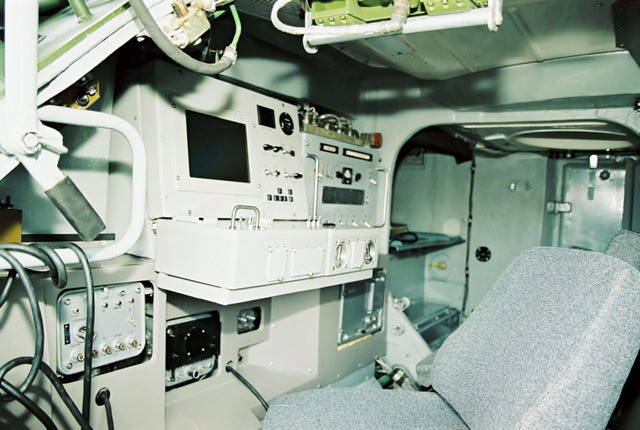 New electronics significantly improves the characteristics of the anti-aircraft complex. Automation of the Buk-MB air defense system is capable of simultaneously tracking air targets up to 255. The 9C470MB PBU is able to interact with the command center of the anti-aircraft brigade, transmitting and receiving information about targets. The command post is offered for use with the Polyana-RB automatic control system.

According to official data, after upgrading the self-propelled fire installation is capable of detecting air targets at distances up to 90 km. At the turn of 80 km, automation can start tracking a target. It should be noted, the range of the anti-aircraft guided missile, proposed for use as part of the Buk-MB air defense system, remained the same - 25 km. It was reported on the modernization of missiles in order to increase the firing range.

In 2005, it was claimed that the Buk-MB project was developed taking into account the state and achievements of the Belarusian defense industry. Experts of the State Scientific Production Association “Agat” planned to expand the modernization of existing complexes of the Buk family to the state of “MB” only by the forces of Belarusian enterprises.

According to some reports, Azerbaijan has become the starting customer of the Buk-MB air defense system. In 2012, there were reports that the Azerbaijani military bought one division of Buk complexes from its armed forces from Belarus. Before delivery, the ordered complexes were upgraded according to the Buk-MB project. In June, several photographs of the Beech complexes of the armed forces of Azerbaijan, allegedly of a modification of BM, were published on 2013.

In September this year, the international exhibition of arms and military equipment ADEX-2014 was held in Azerbaijan. During this event, Belarusian specialists spoke about the state of the Buk-MB project. According to the ITAR-TASS news agency, several African countries have shown their interest in the modernized anti-aircraft system. As an advantage of a complex that could interest potential buyers, the possibility of a configuration change was called. Due to this, the buyer can purchase not a complete set of a battery of six SDA and three ROMs, but a tactical amount of equipment that financial capabilities allow him.

Thus, the Buk-MB air defense missile system is of interest for countries in Africa, South America and Asia. As customers are considered medium-sized states that need modern air defense systems, but limited in their financial capabilities. Interest from some potential customers was reported, but details of upcoming contracts have not yet been announced.