28 September 2013
82
At first, the enemy was very skeptical about this aircraft. Already on the 4th day of the war, Halder noted in his diary: "The Russians are moving towards the use of obsolete low-speed four-engine bombers." The record implied that the affairs of the Soviet aviation went really bad. Relatively little time will pass, and well-trained night-time fighters will be involved in intercepting the TB-3. After each night battle, the pilots of the Messerschmites will draw marks on their fighters about their “victories”, but night will fall, and the “downed” giants will bomb the enemy again. The bomber walked over the target so slowly that it seemed that it was just hanging in the air - “anchored” - and continued the bombing, despite the shelling, indifferently passing dozens of fragments, and sometimes even large-caliber shells, through its corrugated body.


In combat conditions, the Tupolev aircraft showed real miracles. He could take off from the plowed fields, sit down in the snow to a meter deep. I carried heavy oversized cargoes on my outer suspension — GAZ-AA trucks, artillery, T-38 wedges. The aircraft continued to be actively used, despite its age, very actively. By the end of the first year of the war, a large number of crews had made combat sorties on 100, and by the end of the Battle of Stalingrad some crews had already 200 flights.

Before the German attack on the western borders of the USSR, there was an 4 air regiment armed with TB-3: the 7 th heavy bomber air regiment (TBAP) in the north-west direction - the 44 aircraft, including the 18 serviceable, the 1 and 3 th TBAP in the west direction - 94 TB-3, in addition, around the 3 TBAT base there were 14 malfunctioning machines, 14 th TBAP of the south-west direction had 1.06.1941 operational aircraft and 32 bombers under repair. 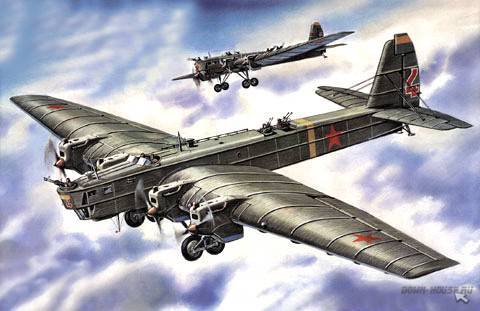 The main focus during the combat training of TBAP was airborne landing. In the 3 and 7 TBAP, part of the crews had experience in transporting heavy equipment on an external sling. The relocation of air regiments to new aerodromes did not do without TB-3, since the aircraft had the greatest carrying capacity at that time. Pilots studied and night bombing, the crews of the 3 and 7 air regiments had night bombing experience during the Finnish war. In general, the combat training of the crews was at a fairly high level.

The outbreak of war

The first TB-3 from 1 and 3 TBAP were already in battle on 22 on June 1941 of the year, launching bombing attacks against the enemy forces. By the beginning of July, all the aviation regiments on the Soviet-German front, armed with TB-3, participated in night bombardments. At first, the results of the bombing were affected by the lack of lighting bombs, which is why the bombing was almost blind.

Despite the fact that the TB-3 was not perceived as a long-range bomber in 1941 (material wear and tear, along with operational limitations), long-range bombers were set as the first tasks. On the night of June 24, the TB-3 of the Western Front aviation struck bombardment of the transport hubs in Poland: Biala Podlaska, MalkinTura, Ostrow, Sedlec, Tsekhonovets. With the beginning of the war, the bomb reserve, created in warehouses as early as in peacetime, actively went into action. So, for example, 7-th TBAP had a supply of bombs for solving all possible combat missions - from the destruction of bridges to the destruction of objects in the squares. At the same time, the 1 and 14 air regiments had machines equipped with old engines, and basically they were to be used as transport and landing aircraft. The 14 th TBAP before the war was even renamed “landing bomber”, with an emphasis on the first word. Some of his aircraft met the war disarmed, therefore, served as transport workers and were engaged in scattering campaign materials in the rear of the German troops. 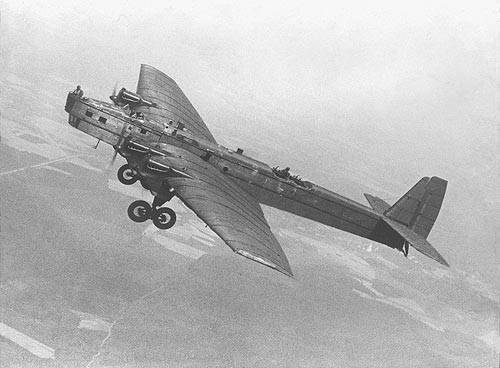 Much is known about the chaos and confusion in the early days of the war on the Western Front. Communication was very unstable, the headquarters did not have fresh intelligence, and if they received it, it was most often already outdated, due to the rapid advance of the Germans. The third TBAP turned out to be the most unlucky. The absurd orders of the command tormented him from the first day of the war. So, on the afternoon of June 3, the regiment lost 23 of 1 TB-4s, which were sent to ... tank columns. As a result, by June 30, 1941, the regiment had lost 11 bombers, and 7 of them were shot down by fighter fire.

Many of us are familiar with the famous novel The Living and the Dead by Konstantin Simonov and remember the episode of the destruction of the TB-3 group by a German fighter perfectly. Described in the novel in detail repeats the incident that occurred on July 10 1941, near Zhytomyr. On that day, 12 TB-3 from the 14-th TBAP were forced to fly to the bombardment without fighter jets and in the area of ​​the target were attacked by a pair of Messerschmitts Bf 109. One of them managed to shoot down with bombers, but the second fighter continued to attack and destroyed the 7 bombers, whose crews escaped by parachute. Described by Simonov has similarities with the case on the Western Front, which occurred on June 29 1941 in the area of ​​Bobruisk. On that day, the 3 TBAP received an order to conduct a bombardment with a great delay and did not have time to fly out before dawn. It was unreasonable and dangerous to launch airplanes into the air during the daytime, but under pressure from above, the takeoff was made in the morning. Above the bombing of the object appeared in bright sun. After the bombing, the planes set off backwards, apparently out of habit, over the settlements occupied by the Germans. The aircraft were calculated and shot down one by one. 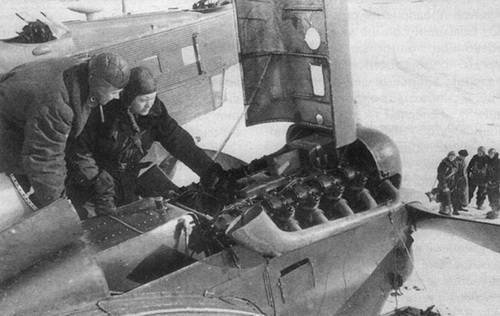 Fortunately, these two cases are the exception. At the same time, it is regrettable that the case described in the novel, generally truthful, later became a dogma, which formed in public opinion an image of the irrational use of TB-3 in wartime, and also testified to the work of the entire Soviet bomber aircraft in 1941. By day, any enemy aircraft, even a bomber, became the enemy for TB-3. At the same time, a significant part of the crews were prepared for night combat flights, therefore there was no need for daytime departures. Fortunately, the high command quickly enough was able to understand this, and the TB-3 began to make combat missions only at night. Thus, in 1941, the aircraft for a long time by military standards, was in relative safety.

Tactics of combat use

The tactics of combat use of TB-3 during the war years was based on the maximum use of its positive qualities, as well as the activity of the German air defense on one or another sector of the front. The exit to the goal was made at different heights, from different directions and with a time delay.

These bombers flew mostly "old" crews with solid experience, which allowed them to confidently reach the target, follow the course and understand the navigator's signaling about the amendments "without words", since most TB-3 had no internal communication system. It was possible to achieve high precision bombing due to the very low flight speed (cruising speed 182 km / h) and good visibility from the navigator's cabin. At the same time, a large bomb load (normal - 2000 kg, maximum - 5000 kg) allowed the use of all available types of bombs on TB-3, in various combinations. After the first year of the war, the front commanders emphasized that the TB-3 fully justified itself as a night bomber. 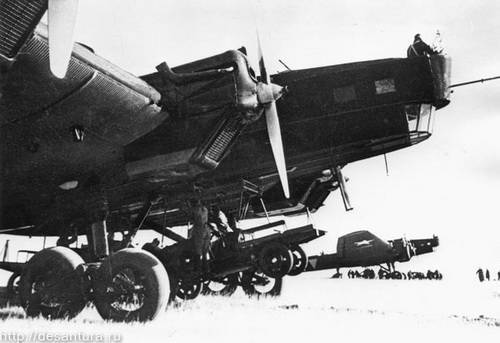 Large-scale and area targets became his main targets: enemy troop accumulations, railway stations, and airfields. When striking them, they used mainly large-caliber bombs (250-500 kg), which were able to destroy the target not only with a direct hit, but also with a blast wave. For greater destructive power, high-explosive bombs were used along with fragmentation, incendiary bombs and RRABs (rotary-dispersing aerial bombs, a prototype of cluster munitions), which were filled with CS glass balls. The area of ​​the lesion, which was covered with balls thrown out by centrifugal force from the RRAB, reached 1 ha or more, depending on the height of the discharge. The disadvantage of these bombs was that part of the glass beads collided even in the air and ignited before falling to the ground.

This may seem strange, but the sighting of anti-aircraft guns at TB-3 showed its complete inefficiency. In this even something mystical was peeping. The ship, illuminated by searchlight beams and subjected to anti-aircraft fire, continued to remain in the air, dropped bombs and was not going to fall. In the German units, which were subjected to raids of TB-3, there was even a rumor that the plane was protected by strong reservations. Of course, about any booking and the speech was not. The salvation of the aircraft was its low speed, which was not calculated large-caliber German anti-aircraft guns. The situation with the biplane U-2 was repeated, in addition, it should be noted that some pilots muffled the engines when approaching the target and the aircraft speed did not exceed 145 km / h.

Most of all TB-3 was disturbed by a barrage when shells exploded chaotically at different heights, and it was very difficult to protect themselves from their breaks. But even in this situation, the car was saved by the fact that she had a minimum number of electric and pneumatic units, so numerous fragmental damage was not critical for her. In addition, the aircraft rescued great strength of the airframe. 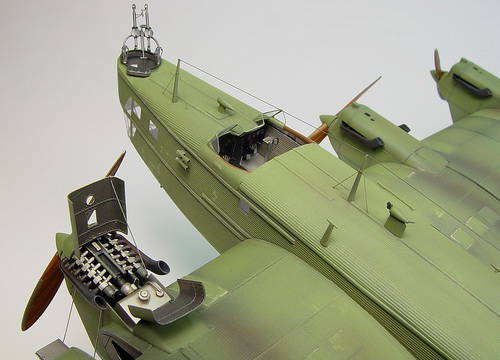 Much more dangerous for the aircraft was the speed MZA. The fire of rapid-fire artillery forced the crews of the TB-3 to resort to bombing from a height of more than 2 km, but even here the TB-3 had a trump card in front of other bombers - low speed of flight, which reduced the spread of bombs.

Also, to reduce the effectiveness of anti-aircraft fire when approaching the goal, the crews tried to stick to non-circular heights. The calculation was made on the fact that the remote tubes, installed in large-caliber anti-aircraft shells at a round height, will not allow them to explode even with a direct hit on the plane. In addition, to deceive the anti-aircraft gunners and enemy fighters, the pilots lit the Holt suspended under the wings. The bright flames of the rockets created the illusion that the plane was on fire and the anti-aircraft gunners stopped firing.

Despite the skepticism about the low-speed giant, which prevailed on the eve of the war, even in the Soviet army, TB-3 proved to be very worthy and made a significant contribution to the victory. It is no coincidence that the aircraft was not decommissioned after the war. Crews of the 52 Guards Regiment continued to carry out combat training plans on these machines until the fall of 1946.