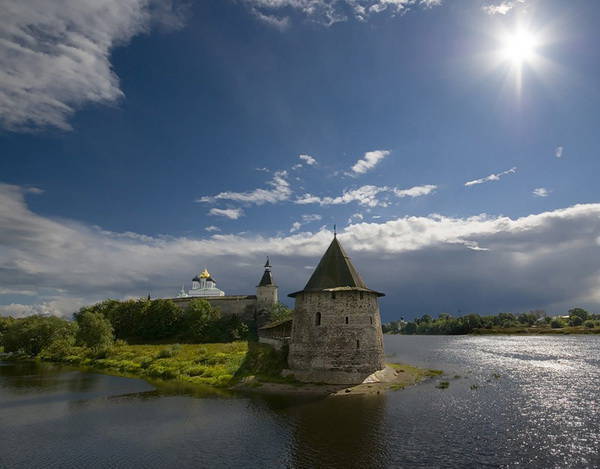 History Russia is a chain of endless throwing, the eternal choice between rods and confusion, patience and pogrom, lawlessness and boundless subordination. For Russians, the measure is alien, the crisis of power for them is equivalent to the collapse of the fatherland. Probably, this is how the Mongolian inheritance manifests itself: through the veil of the Byzantine hierarchy, the little horse of the white khanate emerges.

A colorful patchwork quilt made from various nations, religions and customs, today Russia is bursting at the seams. For many, its disintegration is obvious, because when the fate of a country is in the hands of those who depend on nothing, it is doomed. Trying to guess the future, we look around. But, perhaps, the future lies in the history of the state, reflected in it, like the sky - in the lake surface?

To properly see the past, you need to refute the falsity of trifles and draw it with large strokes. Leaving aside the search for Slavic-Kiev roots, the birth of the Muscovite state will be considered the epoch of Grozny, and the gathering of lands as previous epitogs of Kalita will only be a stormy prologue. It was during Grozny that the prophetic words of Philotheus of Pskov came true, and Moscow became the Third Rome, it was under him that the foundation of the building was laid, which already exists for half a millennium, relations that influenced the morality of subsequent centuries are formed. The beginning of his fifty-year reign was the capture of Kazan, the defeat of the Astrakhan Khanate and the strengthening of the country's internal situation. This was given a crackdown, it was a time of brilliant hopes, which were carried out by Adashevs, silver, viskovatye - clerks and commanders, nobles and robbers, aliens and natives. The heroes fought with everyone - the Tatars, the Swedes, the Poles, the borders became a solid front. But gradually the center of gravity shifts, the energy of the progressive movement is replaced by the energy of the division, the boyar weld and the oprichnina nightmare. Siberia is subjugated by inertia; while disgraced cities are being ravaged, Devlet Girey burns the capital. The Russians are stuck in the Livonian campaign, and the king is already holding a sailboat for flight to England. But he cannot escape from the seed: squabbles, strife and rumors accompany his coffin.

At sunset, the rule of Rurik Titans replaced dwarfs, all sinking in bloodthirsty madness, inaction, and stupor. The phase of fracture irreversibly brings the state closer to the Time of Troubles, from which even the reasonable rule of Godunov could not save Russia. A fragment of the historical ornament, this picture with surprising periodicity is repeated in the mosaic of the Russian paralysmen. Russia, like a drunken workshop, tired of the ordinary, breaks into the abyss of rampant, so that later with incredible tension to catch up. In the dark moments of idleness, accumulated things are squandered, sweat and blood is stolen, and theft and abomination of desolation reign in the vast expanses. But then the bacchanalia, immersed in smoke, seemed to be shaken, and the generation of destroyers, recollecting themselves, is harnessed to a public burden. Under Mikhail Fedorovich, having lost half of the population in strife, the country is still licking its wounds, but with the quietest Alexey Mikhailovich, the breadbaskets have already burst, and the relocation of the hungry from South Russia ends in reunification with the co-religionists of Ukraine. Whatever may be said, a church schism is being overcome, it seems that prosperity and prosperity await ahead. And again, the failure - dynastic feuds, the reign of Sophia, an unsuccessful campaign against the Crimea, rifle riots ... Executions and promises no longer bring the desired result, there is a slow dive into the abyss, from which Russia will have to pull the genius of Peter. But, like a century ago, we see the pulse of her pulse: Russia is clenched into a fist, the people are enslaving, and part of it, unable to withstand the tightening of power, runs after the Old Believers to Siberia and the Don, but the other gives rise to a galaxy of passionaries - Menshikovs, Sheremetyevs, repninah. They make a new dash, and the phoenix rises again from the ashes. Narrowing as you exhale, Russia expands each time, the acquired territories overlap the lost. The Baltic was recaptured, the road to the Caucasus was cut through, the long-awaited access to the sea was obtained. Everything ends with the death of the autocrat. The accumulated fatigue and exhaustion make themselves felt, indifference to the fate of the fatherland dissolves lush speeches and the luxury of balls. Words overwrite words, the war for world peaks is replaced by war of servants, begins the era of palace coups, squabbles and petty intrigues, which crowns the mediocre rule of Anna Ioannovna. It seems that the dictatorship of the regents and the string of mediocre favorites will have no end. The decentralization of power leads to the loss of land and betrayal. But revival is not far off. Forming the eternal Russian cycle, the fall alternates the rise: the decade of Elizabeth - the forerunner of Catherine's brilliant age.

Freedom was never a deliberate necessity in Russia. Not being overvalued, it was understood as freemen and always ended in anarchy. “The title of the non-free was not a Muscovite,” writes Kostomarov, “it was natural there, where everything, up to the most high-born prince, was the slaves of the king.” The genetically fixed axis “God-king-people” legitimizes direct obedience, rejecting its other forms as hypocritical. A Russian voivode of the 17th century, listening to the ranting about freedom in the Commonwealth, formulated this idea: “It is better to endure one king than a hundred lords”. But from bondage to riot half a step. Troika Rus needs strong reins and an iron restraint, otherwise its horses will go astray and fly indiscriminately over potholes and potholes. Russia is fortunate when a scaffold soars in its air. Speransky's liberalization and the reforms of Alexander I fail in Senatskaya Square, the insanity of Chaadaev is deeply symbolic. The infinitely long reign of Nicholas, when the day was like a day, was disheartening: it was easier for Russia to suffer the hardest trials than the boredom of relative well-being. In peaceful times, our universal destiny is whining with an inferiority complex, forced inaction is erupted by despair, demanding refutations, proof of beingness and historicity of its existence. The onset of ossification erupts the tragedy of Sevastopol. It continues with the weak-willed Liberator, whose peacekeeping is interrupted by the Grinevitsky bomb. Since then, the struggle for unity of command and privatization has been under the guise of fighting the democrats. The course of Pobedonostsev and the reaction of Alexander III were only a short respite in this battle, which ends with the demolition of the monarchy and great turmoil. In this case, the defeat of the throne is not least due to the soft temper of the most august.

Further events - a vivid illustration of the same law - are still too fresh in the memory. The Stalinist empire of the period of stagnation, exhausted from the dull monotony, fascinates the saga of democratic sirens: the forbidden fruit is sweet, and the iron curtain conveys the heavenly echo. Russia is inert, it is difficult to swing, stop - it is impossible. The reform scalpel here turns into an ax of revolution. This is a property of the Slavic psyche, prone to sacrifice and cruelty, sensual penetration and unbridledness, materialistic violence and metaphysical longing. And to people of extremes from suicide, the regime is shown. When you have to roll up your sleeves - not to the blues, and today, changing the cage to the jungle, we at least temporarily get rid of destructive samoedy, painful self-criticism and groundless self-deprecation.

Conditions, forms, ideology, and technical progress are changing, wrapping the essence of things in new clothes. There is no less gap between the mica windows of the oprichnogo Kremlin and the stained glass windows of the Catherine’s Hermitage Museum than between the tape telegraph and the Internet. But the Russian core remains unchanged. Under the guise of noble reformism, the Supreme monarchs are hiding here, those for whom Russia is a misunderstanding, a mistake of evolution, talk about freedom of speech. Today they triumph. The collapse of the USSR is a collapse, a fall into the abyss. Or the necessary stage of purification, retreat, concealing the impulse of the next push? After all, to evaluate, you have to lose. Who knows, perhaps, the deaf discontent of the masses portends a new revival?

We are in Yandex Zen
Ukrainian authorities must end street lawlessness
6 comments
Information
Dear reader, to leave comments on the publication, you must to register.