There is no war, but more and more war criminals 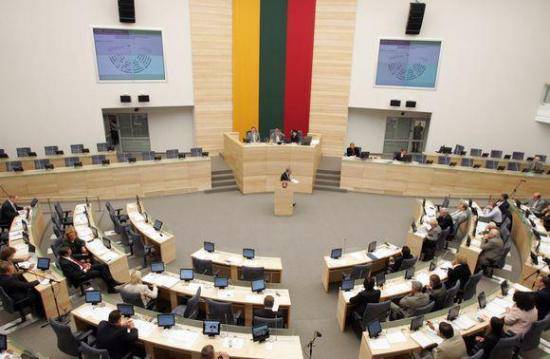 Guess who is the best looking for war criminals in the world? And not only is it seeking, but it also brings into this category persons who were not such before? Of course, Lithuania! This is her specialization: to declare all those who somehow “offended” her as war criminals. To know henceforth, and to others it was not known. A conversation with war criminals in the world is a bad conversation. They are detained immediately and handed over to the place where they committed the crimes.

Raimondas Pytrauskas, Deputy Chief Prosecutor of the Department of Investigation of Organized Crime and Corruption of the Prosecutor General’s Office, says that this will be followed by a request for a preventive measure - arrest, and a request for the issuance of a new European arrest warrant.

At the same time, the Lithuanian authorities will turn to the law enforcement bodies of Russia so that the suspects will be informed about the metamorphosis that has happened to them in Lithuania. And since the “war criminals” understand that no one will give out the suspects to them, they will immediately proceed to the correspondence court. “The case is almost ready for the court - there will be a court in absentia,” said Raimondas Pytrauskas to the Lithuanian news agency BNS. Petrauskas said that on the eve of the 20 anniversary of the murder at the checkpoint in Medininkai, "the process is very much in the direction of the triumph of justice."

The processes began to move particularly actively towards the "triumph of justice" with the arrival of the General Prosecutor of Lithuania Darius Valis - the appointee of President Dalia Grybauskaite. The retraining of ordinary crimes into crimes against humanity and war crimes began. For example, the 13 events of January 1991 of the year, whose persons also became war criminals. But, despite the retraining, clarity in the investigations themselves did not increase.

But with the advent of the new Prosecutor General, the number of convicts from among the former employees of the MGB and the Ministry of Internal Affairs has increased significantly. With them, the prosecutors are clear: they “transgressed” against humanity and were war criminals. They were so directly accused of the genocide of the Lithuanians and the destruction of the "Lithuanian partisans" who fought the Soviet regime. That is, prosecutors say, being in the service of the Soviet power, these people should not have to carry out orders and touch fascist shortages with the Schmeisers sitting in the forest pits. Then the new Lithuanian authorities would have no complaints about them.

In the heat of official zeal, prosecutors even tried to put them behind bars on 5 for 83-year-old Vaclovas Koyalis, the former “opera” of the Taurage district. But the court questioned whether the old man was able to serve such a sentence.

This is what the situation looks like if you look at the activities of the Lithuanian prosecutor’s office on the one hand. And if on the other hand, it turns out that Valis is hindering investigations related to cases in which official Vilnius looks not so good. These include claims of relatives of those killed at the hands of Lithuanian gangsters (the so-called "partisans"), as well as the case of counterintelligence officer Vytautas Poczyunas, who died in 2006 in Brest under strange circumstances, and other high-profile cases.

The activity of the Lithuanian prosecutors finally responded to the Russian authorities. Last Wednesday, the International Association of Anti-Terrorist Alfa’s veterans ’division appealed to the Russian President with an open letter in which former unit’s fighters asked to assess the actions of the Lithuanian leadership in connection with the detention of Colonel Golovatov.

“There is every reason to believe that the political forces of Lithuania, seeking to solve their internal problems by searching for an external enemy in the face of Russia, trying to drive a wedge in relations between the EU and Russia, will not stop at provocations against Golovatov and take actions against other veterans of Group A” who were on official business in Vilnius in 1991, ”the letter says.

“We are concerned about the actions of the Lithuanian authorities and the support that Latvia and Estonia provide to them, since this is directly related to the security of the members of the International Association of Veterans of the Alpha Special Forces, who always clearly and flawlessly fulfilled their duty to protect the national interests of the USSR and Russia”, - anxious veterans.

Veterans are reminded that "employees of Group A of the Seventh Directorate of the KGB of the USSR, headed by Golovatov, on official business in 1991, acted on the basis of an order received from the leadership of the State Security Committee in the territory of the Lithuanian Soviet Socialist Republic within the USSR." “The task assigned to subdivision“ A ”was successfully completed without the use of firearms. weapons: only blank cartridges and special equipment were used. Not a single citizen of the Lithuanian SSR suffered from the actions of our employees, ”they write.

“Everyone knows the numerous facts testifying to the attempts of the Lithuanian side to rewrite history both during the Great Patriotic War, and the period of the USSR, exposing Russia as an occupier. We ask you, as a guarantor of the Constitution, to assess the attempts of such attacks on citizens of the Russian Federation, affecting the interests of Russia, as well as the honor and dignity of Alpha veterans. We count on your support! ”- ends the letter.

President Medvedev familiarized himself with the appeal. This was reported on Wednesday by the press secretary of the head of state Natalia Timakova. “The position of the president is that Russia has always defended and will protect its citizens,” Interfax quoted Timakova as saying. “In this particular case, the inadequate position of the Lithuanian authorities, who are trying to lay the blame on Russian citizens for actions committed by a state that no longer exists now, is puzzling,” she said.

To be honest, Russia does not always protect its citizens in front of other countries, for which there are numerous examples, but in this case it’s good that the president has indicated his position in the way we want.

Recall that reserve colonel Mikhail Golovatov was detained in Austria on a warrant for an international wanted list drawn up by the Lithuanian authorities. In Vilnius, the officers of Alpha are considered guilty of the deaths of civilians in clashes 20-years ago.

“On July 14, I purchased a ticket for the flight number 602 of Austrian Airlines Domodedovo-Vienna with a subsequent trip to the city of Ramsau,” said Col. Golovatov of RIA “News". - There were collections of skiers, biathletes and double-selection. I am the President of the Moscow Ski Federation and the Vice-President of the Russian Ski Federation. We flew from Domodedovo on time. After 2,5 hours were in Vienna, and I went with a backpack to passport control. At the control, a border guard sat, who looked at the monitor, put down my passport and asked me to wait a bit. Then she went to the second employee, returned and said that they would check the origin of my visa. I have a multiple visa. Then a police officer and sergeant appeared and asked me to go with them. In 16: 30 came to the police station at the airport. The policeman watched the data on his computer for 5-7 minutes, after which he asked me: “Have you been to Vilnius?”. I replied that I was once, 20 years ago. Here, as they say, everything became clear to me. ”

A day later, Austrian law enforcement agencies released the colonel on the grounds that the Lithuanian side did not provide solid evidence of his involvement in the crimes. Lithuania protested, supported by two other Baltic republics.

According to military expert Vladislav Shurygin, if the wish of Vilnius were satisfied, the consequences would be much more dramatic. “The fact that Golovatov avoided detention and transfer to Lithuania made it possible for Austria, and Russia, and Lithuania to avoid an enormous aggravation of relations. Such a demonstrative arrest and export of a security officer of this level to Lithuania is not only a scandal, but also a reason for very serious sanctions. Handing over such a person is a national disgrace. So, I repeat, the fact that Golovatov returned to his homeland can be considered a happy ending, ”the“ Glance ”gives the expert’s words.

There is nothing to incriminate the colonel of the Lithuanian authorities. Firstly, Russian citizens are not responsible for the Soviet Union. And secondly, his group acted on the basis of the order of the Soviet leadership and did not use military weapons. True, Mikhail Gorbachev later disowned the "alfovtsev" and said that he did not send them to Lithuania, but the price is known to him: everyone knows that the special forces do not act without an order.

And it was like that. 13 January 1991, the leadership of the USSR sent military forces to the capital of Lithuania, which declared 11 in March 1990, independence from the USSR. In clashes with the protesters at the Vilnius TV tower, 14 people were killed, including in the back, an Alpha fighter was killed. Later, information appeared that the incident was the result of a provocation by the Lithuanian special services, who shot at the participants in the clash (KM.RU spoke in detail about this quite recently). Audrius Butkevicius, the former head of the Lithuanian regional security department, was told by the media that he ordered snipers to take positions on the roofs of houses next to the Vilnius TV tower and open fire. Investigations after his recognition in Lithuania was not conducted.

23 August 1999, the Vilnius District Court convicted 6 people for crimes allegedly committed by the Soviet military. 23 people remain in the status of suspects, of which 21 is a citizen of Russia and two Belarusians.

Lithuania thus saved an informational occasion, which, like a tambourine, can be pulled out into the light whenever it is necessary to spoil the international image of Russia, and to rumble it at your pleasure. I wonder why he needed him this time?

We are in Yandex Zen
Grybauskaite is waiting for your Nuremberg?
We were shouted: "Ivan - go home!"
6 comments
Information
Dear reader, to leave comments on the publication, you must to register.